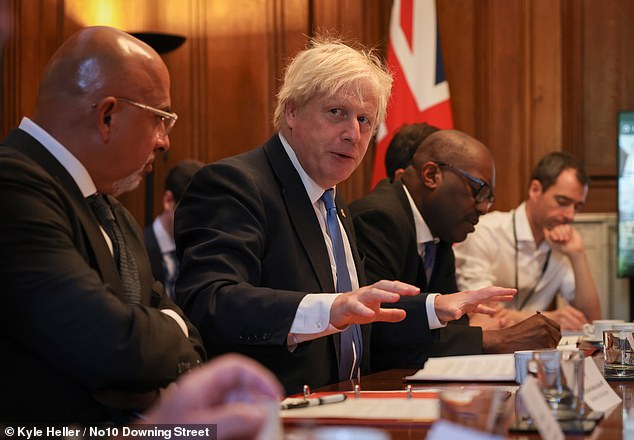 Boris Johnson made a surprise appearance at a crucial meeting with energy bosses at Number 10 today – just days after Downing Street said it would not intervene in the energy cost crisis life.

Already struggling families were stung this week by new forecasts that showed typical household energy bills set to soar to more than 4,200 next year.

Mr Johnson’s attendance at the meeting with 15 energy companies was not expected, with Mr Zahawi and Mr Kwarteng previously believed to be the ministers who would lead the talks.

The Prime Minister – who last week spent a belated honeymoon with his wife Carrie at a Slovenian eco-resort – has recently come under pressure from business leaders to end a ‘drift summer’ on the cost of living crisis, as he waits for his successor to be elected.

Labor has called Mr Johnson ‘shameful’ for refusing to intervene as energy bills are set to rise to ever-higher levels.

With Mr Johnson now in a gatekeeper role after announcing his resignation, Downing Street has insisted any decision on further support for Britons should be left to the new Prime Minister.

Mr Johnson repeated that message to energy bosses today, telling them ‘important budget decisions’ would be made by his successor.

It sparked fury, with the Prime Minister warned it would be ‘too late’ to wait for Liz Truss or Rishi Sunak to succeed him to avoid families panicking over how they can afford to heat their homes. house this winter.

Mr Johnson’s attendance at the meeting was not expected, with Mr Zahawi and Mr Kwarteng previously believed to be the ministers who would lead the talks.

As he sees out his days in office, Mr Johnson – as well as his holiday in Slovenia – has moved away from major issues.

Instead, he was seen having fun with a ride in a Typhoon fighter jet, playing with military equipment while meeting Ukrainian troops in Yorkshire, and also taking part in a tour with special forces.

On Tuesday evening, Mr Johnson was pictured jumping rope and sword fighting at a reception in the Downing Street garden.

The Prime Minister’s honeymoon in Slovenia followed his wedding last month at the Cotswolds estate of Tory billionaire Lord Bamford.

The Johnsons tied the knot last year but were unable to hold a large-scale event due to Covid restrictions.

The prime minister is also holding a series of farewell calls with world leaders during his final weeks in office – although a planned visit to meet Mateusz Morawiecki in Warsaw fell through after the Polish prime minister told the number 10 that he was too busy.

Mr Johnson tried his hand at military equipment as he met Ukrainian soldiers being trained by the British Army in Yorkshire.

As he sees out his tenure, Mr Johnson also enjoyed a ride in a Typhoon jet

After his surprise appearance at today’s meeting with energy bosses, Mr Johnson offered little hope of any imminent additional support for families.

He said: “Countries around the world are feeling the impact of Putin’s damaging war in Ukraine.

“We know this winter will be difficult for people in the UK, so we are doing everything we can to support them and must continue to do so.

“Following our meeting today, we will continue to urge the electricity sector to continue working on ways to alleviate cost of living pressures and invest more and faster in energy security. British.”

“We continue to roll out government support over the coming months, including the second installment of 324 of the cost of living payment for vulnerable households, additional support for pensioners and people with disabilities, and the remission of 400 energy bills for all households.”