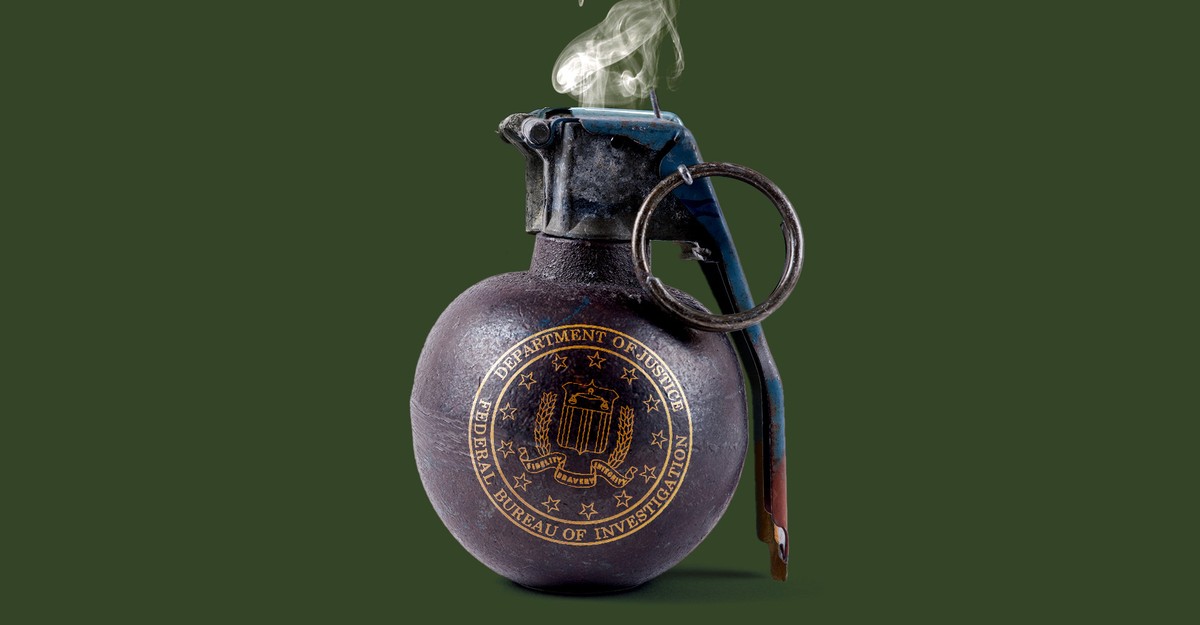 In a sane world, a partisan Republican reaction to the FBI’s raid of former President Donald Trump’s Florida home on Monday would look like this: We don’t believe Trump did anything wrong. We were skeptical of the Justice Department’s actions, but are waiting to see the evidence before making sweeping claims or final judgments. Unfortunately, the reaction online, in right-wing media and even among lawmakers has been far from sensible. It was unbalanced and disturbing.

MAGA-world residents have called for violence and civil war, so much so that the phrase civil war was trending on Twitter Monday night. A user of Trump’s social media platform, Truth Social, said: Fuck a civil war, give them a REVOLUTION. We number all 10 to 1.

Have seen references to lock and load and statements like this: it certainly feels like they are treating this like a burning civil war. When all of this is said and done, those responsible for these tyrannical actions must be hanged.

Ben Collins, who covers disinformation, extremism and the internet for NBC News, wrote Monday night: The posts on these pro-Trump forums tonight are as violent as I’ve seen them since before Jan. 6. Maybe even more.

The Gateway Pundit, a pro-Trump outlet, wrote this. Means. War that was quickly amplified by a Telegram account linked to Stephen K. Bannon, former political adviser to Mr. Trump, according to the New York Times. Bannon called the FBI the Gestapo and said, We have to snuff out the FBI and snuff out the Department of Justice. Another former Trump adviser, Michael Caputo, said: “With this militant raid on President Trump’s house, we have become Russia. The FBI is the KGB. And Foxs Dan Bongino called the FBI action Third World bullshit.

Juliette Kayyem: The bad news and the good news from violent Trump supporters

Dinesh DSouza, a right-wing provocateur who was pardoned by Trump for campaign finance violations, said: “The FBI, an organization created to fight organized crime, has become the most powerful organized crime syndicate in the world. . Now we must take the fight against organized crime to its logical conclusion: shut down the FBI and prosecute this gang of dangerous criminals.

Former House Speaker Newt Gingrich has suggested the FBI may have filed evidence against Trump. When asked by Charlie Kirk, a talk show host, why the FBI would do this, Gingrich said, Wed would be better off thinking of these people as wolves who want to eat you, wolves who want to dominate. According to Gingrich, the FBI has declared war on the American people on such a level and with such utter dishonesty. We see the ugly face of a tyranny.

One of Fox News’ most popular personalities, Jesse Watters, hinted that the FBI was setting up Trump. How do we know they’re not filing evidence right now? He asked. Watters added, I’m angry. I feel violated. The whole country feels violated. It’s disgusting. They declared war on us and now it’s over.

Sebastian Gorka, a former Trump adviser who now hosts a show on Salem Radio, said the FBI’s actions were a declaration of war. Monica Crowley, a right-wing commentator who worked in the Trump administration, tweeted, This is it. This is the hill to die. Another popular right-wing talk show host, Mark Levin, made this claim: This is the worst attack on this republic in modern history, period. For good measure, he added, it is a Stalinist hunt. And Stephen Miller, who worked closely with Trump in the White House, called the FBI’s action an abomination and made this historic comparison: We really live in a situation where the FBI has become a praetorian guard of Rome. where they take it upon themselves to decide who holds the power in this country.

Bannon busy doing the rounds told conspirator Alex Jones I don’t think it’s beyond this administrative state and their deep state apparatus to actually try to work on the assassination of President Trump . That accusation was echoed by former New York City Police Commissioner Bernard Kerik, who said he feared Democrats were trying to assassinate Donald Trump. I’ll tell you something: I’m not into conspiracies; I’m not into anti-government rhetoric, Kerik said. This is the first time in my life that I would say I have a deathly fear for Donald Trump. I wouldn’t put the assassination behind these people.

Many Republican candidates and lawmakers have been just as incendiary as these more peripheral figures. Arizona gubernatorial candidate Kari Lake called the FBI’s search for Trumps one of the darkest days in American history: the day our government, originally created by the people, has turned against us. She added: This illegitimate and corrupt regime hates America and has armed the entire federal government to overthrow President Donald Trump.

Representative Lauren Boebert said of the FBI search: This is Gestapo crap, and it won’t hold up. Representative Marjorie Taylor Greene insisted, this is the rogue behavior of communist countries, NOT the United States of America!!! This is the kind of thing that happens in countries during civil war. She also called on Congress to DEFUND THE FBI! and said the Republicans, if they take control of the House, would have to face the enemy within.

Read: The opposite of a raid

Elise Stefanik, the third House Republican, said Joe Bidens, the FBI and the Justice Department, have been fully armed against their political adversaries. She characterized what the FBI did as an absolutely outrageous and un-American abuse of power. And House Minority Leader Kevin McCarthy has accused the Justice Department of an intolerable state of militarized politicization.

Senator Ted Cruz said the FBI action was corrupt and an abuse of power. Senator Rand Paul said what the FBI really did was attack our constitutional republic. Senator Marco Rubio said: “Using the power of government to persecute political opponents is something we have seen repeatedly in Third World Marxist dictatorships. But never in America. And Florida Governor Ron DeSantis claimed that the raid on [Mar-a-Lago] is another escalation in the militarization of federal agencies against political opponents of the regimes. And so on.

The worst may be yet to come. Already, Trump is setting the stage for his supporters to reject any evidence of wrongdoing the FBI may have uncovered. He released a statement yesterday noting that the FBI would not let anyone, including my attorneys, near the searched areas and hinting at the possibility of agents planting evidence. Did we expect anything else from him?

The Justice Department’s decision to search Trump’s home may have been reckless. And at this point, we don’t know the specific subject of the search or what crime the FBI is investigating. But we do know that a federal judge signed the warrant, which means he had reason to believe the FBI would find evidence of a crime at Trump’s home. We also know that FBI Director Christopher Wray was appointed by Trump.

Obviously, at this early stage, the responsible reaction to what the FBI has done is to withhold judgement, wait and see, base its assessment on facts and evidence as they arise. are known. But such an approach is alien to the modern GOP. The whole incentive structure is to use intemperate, belligerent, conspiratorial, even crazy language. This week has once again proven that there is no rhetorical line Trump Republicans won’t cross, no outlandish accusation they won’t make. Now it’s all about one-upmanship, with each person trying to make a claim that’s weirder than the next.

This debasement of language has a considerable cost. George Orwell believed that political language mattered because politics mattered and that the corruption of one led to the corruption of another. And in some cases, the misuse of words can lead to political violence. We saw that on January 6, 2021. My dread is getting closer and closer to that. Some rabid and inflamed people on the right, caught in an echo chamber of undiluted anger and massive lies clearly hope so. They are perpetually frantic and hyper-agitated, convinced that they are in an existential struggle against an evil enemy.

Faced with this, almost the entire Republican Party encourages them. Based on no evidence yet, Republicans are promoting a narrative that the events of this week prove that the United States government and its top law enforcement agency are Nazi-like. , corrupt to the core, at war with their own citizens. This cannot end well.

If political violence happens, the Republican Party will be the perpetrators and finishers. In his 1838 speech at the Young Mens Lyceum, in which he warned of mob violence and people who disrespect American laws and courts, Abraham Lincoln said: As a nation of free men, we must live through time or die by suicide. Today it is Lincoln’s party that wants America to die by suicide.