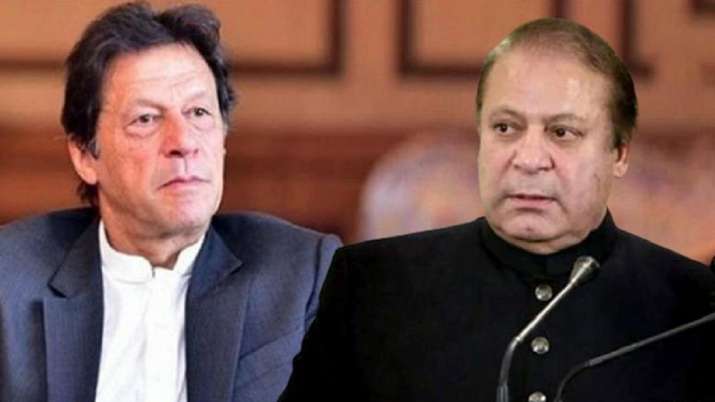 Image source: AP Ongoing efforts to bring Nawaz Sharif from London to Pakistan next month: Imran Khan HighlightsA plot is being hatched to disqualify me from Toshakhana and banned funding cases, Imran Khan says This is done to open the door way for Nawaz Sharifs to return from London next month, he added that the Pakistan Election Commission was preparing to hold a general election by October

Nawaz Sharif could soon be back in Pakistan as efforts are underway to bring him back from London next month, Tehreek-i-Insaf chairman Imran Khan has said. The cricketer-turned-politician and former Prime Minister of Pakistan also spoke of (establishment) pressure to agree on ‘reversing Nawaz’s lifetime disqualification’ so that he can compete in the next general elections in 2023.

Indirectly referring to the country’s powerful military establishment, Khan said, “A plot is being hatched to disqualify me in Toshakhana and banned funding cases to pave the way for PML-N supremo Nawaz Sharifs to return from London next month”, Imran Khan told a celebratory gathering at Lahore’s National Hockey Stadium at midnight on Saturday.

The ruling Pakistan Muslim League (Nawaz) (PML-N) has made it almost official that its supreme leader Nawaz will return to Pakistan ahead of the next general election for a “real one-on-one fight” with Khan.

Interior Minister Rana Sanaullah recently said Nawaz would return before the next general election to lead the party’s campaign.

There was a discussion in the party about the return of Nawaz. He is likely to return to Pakistan before the next elections whenever they are held to lead the PML-N campaign, Sanaullah said.

According to reports, Pakistan’s Election Commission is preparing to hold general elections by October, a year ahead of schedule.

Sanaullahm, the minister considered close to Nawaz, further said that some amendments could be made by parliament to reverse the lifetime disqualification of the three-time prime minister.

Ousted Prime Minister Khan further said that as part of the plot, Nawaz would be brought back to Pakistan by the end of September.

Don’t compare me to a dacoit (looter). I want to tell the conspirators to do anything, I will not make any deal,” he said.

After Shehbaz Sharif managed to become prime minister last April following a successful no-confidence motion against Khan, some PML-N leaders are very excited hoping that their party’s supreme leader will soon be among them. But legal issues are said to be the main obstacles to his comeback plans.

A sick Nawaz has been living in London since November 2019 for medical treatment after the High Court granted him a four-week reprieve. Nawaz was serving a seven-year prison term in Kot Lakhpat prison in Lahore in the Al-Azizia corruption case before he left.

Prior to his discharge, current Prime Minister Shehbaz had submitted a recognizance to the Lahore High Court guaranteeing that his elder brother would return within four weeks or upon certification by doctors that he had recovered his health and was fit to return to Pakistan.

In August last year, Nawaz lodged an appeal with the British Immigration Court after the Home Office refused to extend his stay in the country on medical grounds.

Nawaz can legally stay in the UK until the court rules on his plea for staying in the country. Nawaz’s passport expired in February 2021. However, Shehbaz’s government issued him a new passport last April.

China vs. USA: Wrath of the Dragon