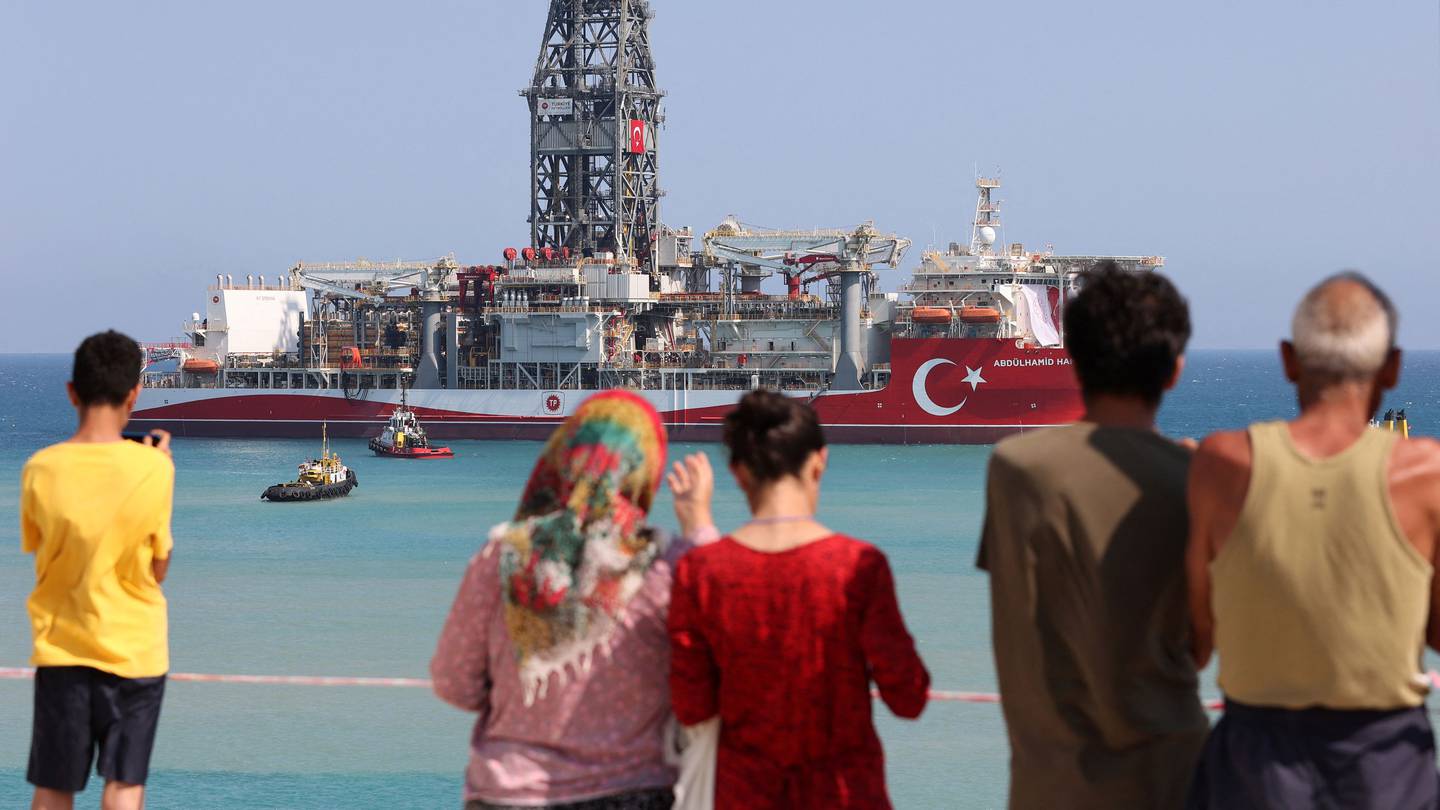 The head of the Turkish Republic of Northern Cyprus (TRNC) hailed the new mission, while EU members Greece and Cyprus, who have been saying for years that Turkey’s hydrocarbon exploration in its territorial waters is illegal, claimed Turkey was seeking to stoke tensions with this latest operation, some 60km northwest of Cyprus.

Major gas discoveries by Egypt and Israel, and around Cyprus, have led many observers to believe that the waters of the eastern Mediterranean are rich in resources, sparking a race for access between states. residents. Following its recent gas discovery of 540 billion cubic meters in the Black Sea, Ankara hopes to make another significant discovery and start becoming less dependent on energy imports, mainly Russian oil and gas. Thanks to a maritime agreement with Libya, Turkey has carved out a vast area for gas exploration which crosses the maritime borders of Greece and Cyprus.

Greece has complained to US and EU allies about Turkey’s alleged breaches, while Turkey has struggled to keep the issue bilateral. Greece is only hurting itself by antagonizing Turkey with petty calculations or turning to third countries, Erdogans’ communications director Fahrettin Altun said in an interview last week.

EU states, including Germany, have scrambled to find new energy sources after pledging to end their reliance on Russian oil and gas

This is rather dishonest, because Turkey and Greece are members of NATO and therefore have to ensure the security of the waters of the Aegean Sea and the Eastern Mediterranean and discuss relevant issues with NATO allies (the ships Turkish drillers are accompanied by warships). Specifically, Turkey and Greece have already agreed to US involvement in the Aegean negotiations, as detailed in the US Eastern Mediterranean Security and Energy Partnership Act of 2019.

Still, Ankara may be concerned about historical precedent. The new drillship is named after Sultan Abulhamid II, who ruled the Ottoman Empire when Greece ceded border areas and agreed to major reparations in a peace treaty signed 125 years ago.

The Greco-Turkish War of 1897 centered on Crete, a large island in the eastern Mediterranean, like Cyprus, with a large Muslim Turkish population and a Greek-speaking majority with a history of rebellion against Ottoman rule. Appointed by Abdulhamid, the Greek governor of Crete began to institute broad autonomy, prompting members of a secret Greek nationalist society to demand enosisor annexation by the mainland.

A Greek navy ship landed in February 1897 and joined the rebels in proclaiming the union of Crete with Greece. European powers prevented Athens from sending reinforcements, so Greece instead launched an assault on the Turks in Thessaly, along its eastern coast. The Greek forces were quickly overwhelmed, which is why it is often called the Thirty Days’ War.

Yet the Ottoman victory was short-lived. As part of the peace treaty, Greece agreed to pay the Turks four million liras and to engage in international financial surveillance by Russia, the United Kingdom, Italy, France and the German and German empires. Austro-Hungarian. When these powers saw the continuing instability in Crete in 1898, they intervened to expel the Ottoman forces and create an autonomous Cretan state overseen by Prince George of Greece and Denmark.

The tables had turned. Greece, humiliated by defeat, suddenly appears as a rising power. The overconfident Turks went to war with four Balkan states in 1912, including Greece, and quickly lost more territory. Greece formally annexed Crete the following year.

Today, the result on Cyprus could take a similar form. If Turkey continues to push Athens and Nicosia into defensive postures or even open conflict, the US and EU may not sit idly by and will likely intervene, presumably in favor of the Greek side.

So the best course for Turkey is not just to accept outside involvement, but to embrace it. Under this 2019 Eastern Mediterranean Security Act, US President Joe Biden already has congressional approval to mediate the Cyprus dispute. Ankara and Athens should welcome it publicly.

A recent State Department statement made clear that the United States urged its allies to diversify their energy sources away from Russia and began working with Turkey to strengthen its energy security. Cyprus presents the perfect opportunity to do both.

“Solving the Cyprus problem and solving the energy crisis go hand in hand,” wrote Charles Ellinas, a senior fellow at the Atlantic Council with decades of experience in regional oil and gas, this week. Cyprus courier.

EU states, notably Germany, have been scrambling to find new sources of energy after pledging to end their dependence on Russian oil and gas. The most likely sources are Central Asia, the Eastern Mediterranean and the Gulf. Already, Germany is considering setting up floating terminals to receive liquefied natural gas (LNG) and hopes to secure a steady supply from Qatar.

Much of this aligns with Turkey’s goal of becoming an energy hub. Ankara is closely aligned with Qatar, one of the world’s top LNG producers, and could likely help secure a favorable deal for Germany and the EU more broadly. Turkish officials have discussed with the Israelis the construction of a pipeline to transport Israeli gas to Europe through Turkish territory. This pipeline could of course pass through Cyprus and deliver the fruits of Cypriot finds.

Turkey already helps bring non-Russian energy to Europe, as its Trans-Anatolian Gas Pipeline is a key node on the Southern Gas Corridor. Among Turkey’s goals in supporting Azerbaijan in late 2020, the Nagorno-Karabakh War was to gain better access to Azerbaijani gas and Turkmen gas through the Trans-Caspian Gas Pipeline project.

The United States has some leverage in this dispute. Turkey is looking for its F-16 fighter jets, as well as financial aid to stave off a currency crash. To help opposing sides reach a deal, the US could agree to sell F-16s to Turkey, as promised by Mr Biden, while the EU could offer to jump-start Turkey on refugee funding .

Washington has pledged to support European outflows of Russian energy and could also help advance and fund the Trans-Caspian Highway, bringing Turkmen gas to Europe via Turkey. In return, Ankara could pledge to stop buying Russian weapons and agree to start weaning itself off Russian energy and endorse Sweden and Finland as NATO members, while Greece could permanently withdraw all troops from the Aegean islands.

None of this would be easy. There’s a reason Cyprus has confounded top negotiators for generations. But it’s not like the Biden administration is new to such talks. US officials are currently brokering a maritime dispute in the eastern Mediterranean between longtime rivals Israel and Lebanon, and that effort appears to be heading for success.

More importantly, the rewards were worth it: solving a massive, decades-old problem territorial dispute, boosting regional gas supplies when energy is scarce, and uniting NATO allies at a defining moment for the alliance. From the moment we extract natural gas, Erdogan predicted last week, you will see how the weather changes throughout the region.

I couldn’t have said it better myself.