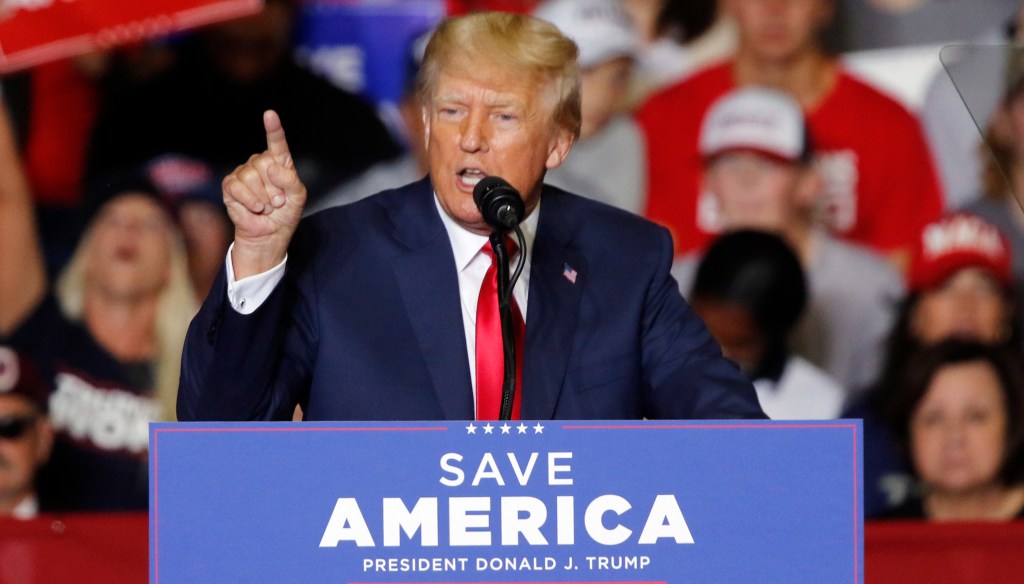 If you ask the former president, America is in shambles. “We no longer have a border. Our country is invaded. This is an invasion by millions of illegal aliens,” Donald Trump said at his Saturday night rally, using the racist “invasion” language of the Great Replacement theory favored by violent white nationalists. “The economy is collapsing. Your 401(k) is collapsing,” Trump told the crowd. “The shootings, the stabbings, the rapes, the carjackings are skyrocketing.”

Trump delivered his speech, which began 45 minutes late, spitting hate at a cheering crowd in Youngstown, Ohio. Trump is in the state campaigning for Senate nominee JD Vance, whom he endorsed and whose campaign recently required an urgent cash bailout. “JD kisses my ass,” Trump said. “He wants my support so much!”

But, as usual, Trump has spent more time talking about himself and positioning himself as the victim of “messy persecution” than building up the candidates he is there to support. He complained that the witnesses of January 6 are forced to turn against him. “They take good people and they say, ‘You’re going to go to jail for 10 years…unless you say something bad about Trump. Then you don’t have to go to jail he said, and Trump complained that he had left a “very luxurious and pleasant life” to enter politics.

Trump: From the moment I left my very luxurious and enjoyable life, I had such a great life. Now they wanted to say, let’s get this guy. They’ve been trying for six years. They did not succeed. We are not going to let it happen. pic.twitter.com/EnzBw3AIkT

Trump believes his supporters are jailed for five to 10 years for refusing to speak ill of him.

No, Donald, they’re in jail because they broke the law. pic.twitter.com/AyKEYlF9nE

Trump then released another of his favorite talking points, describing himself as the victim of government espionage. “They spied on my campaign. And no one wants to do anything about it. Can you imagine if I was spying on the campaign of – forget Biden – what about the campaign of Obama? Can you imagine this [the penalty] would be? It might be death. They would bring back the death penalty,” Trump said. Later, Trump endorsed the death penalty for drug dealers and human traffickers.

The former president also complained that Biden released crude from the country’s Strategic Petroleum Reserve to reduce gas prices, saying it was used ‘only for war’ and seemingly forgetting that he had himself drawn from the strategic reserve for the same reason.

“I don’t know if we’ve had a more radical or dangerous time in our country,” Trump said. Returning to his argument that America is falling apart, the former president zealously recited details of horrific crimes allegedly committed by immigrants. The hate continued when Trump mocked trans women in sports.

Ahead of Trump’s speech, Rep. Marjorie Taylor Greene (R-Ga.) helped warm up the crowd and declared him the GOP’s “one true leader.” “The future under the Republicans… faithfully follows the one true leader of the Republican Party and you know who that is,” she said before injecting lies about voter fraud. “It was the one we elected in 2016 and the one we re-elected in 2020, who won the election.” Fresh from appearing to kick a climate activist on video (she denies it), Greene poked fun at Democrats’ concerns about climate change. “We know cheap gas won’t last,” she told the crowd. “Wanna know why? Democrats worship the climate. We worship God.

Trump also denounced the Green New Deal, calling it “destructive” and “bullshit.” “I can’t think of a word that describes it better,” he said.

Also in the pre-Trump lineup: GOP congressional candidate JR Majewski, who boasted of being at the “base of the Capitol building” on Jan. 6 but claims he “didn’t commit any crime” and “didn’t break any police barriers”. Majewski in his speech said “my pronouns are patriot ass kickers” and promised to “turn this Green New Deal brown, like the turd that it is”.

MyPillow Guy Mike Lindell made an afternoon appearance where he claimed he had ‘prayed’ that then-Democratic Senate candidates Raphael Warnock and Jon Ossoff would win their elections in January 2021, because if a Republican had won one of those seats, “most people in the country” would not believe his and Trump’s absurd claims that widespread “election crime” was taking place in the United States

Mike Lindell spoke for 1 hour and 26 minutes just outside the Trump rally at OH today. Here he says he prayed to God for Warnock and Ossoff to win their Senate races because it proved to people once and for all that the election was rigged. pic.twitter.com/21FOuSiORE

The FBI seized Lindell’s phone this week as the pillow mogul waited in line at the drive-thru of a Hardee. Trump, meanwhile, continues to battle the Justice Department’s search of his Mar-a-Lago compound and election interference lawsuits in Georgia, alongside a host of other legal issues.

“We are a nation in decline,” Trump said near the end of the rally. As he spoke, dramatic classical string music swelled in the background (yes, seriously), giving the moment a feel of cinematic propaganda.