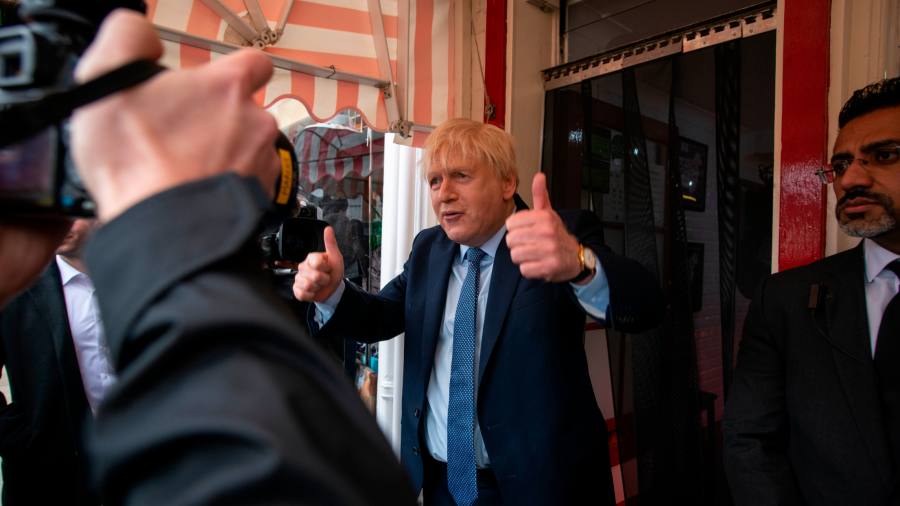 You hear the voice, then you see the hair. Boris Johnson left Downing Street just two weeks ago, but here he is again, already back on TV, quoting Roman emperors. However, something important has changed. Squint past the bird’s nest and you realize the face belongs to Kenneth Branagh. The actor was chosen to play the former prime minister of This Englanda six-part dramatization of the first wave of the Covid pandemic in Britain.

Like a government, a production of this magnitude has many captains. But chief among them is filmmaker Michael Winterbottom, who multi-tasks as producer, co-director of the first and final episodes, and co-writer of all six.

Today he is at home in Norfolk and looks like a busy family GP. He speaks with relief of Branagh’s role. While the series aims to reflect the breadth of Britain’s experience with Covid supporting care homes and hospitals as well as ministers and special advisers (spads), Johnson is its biggest moving part, a character who calls a heavyweight actor. You can’t underestimate how difficult Boris is to play, says Winterbottom. Much of what everyone sees is already endless onion layer performance and performance. None of us know where it ends.

For some, Johnson’s very rise to the top was proof of a screwed up Britain. They can find This England a surprisingly sympathetic portrayal, the director presented as a harassed middle-aged general manager with a new partner in Carrie Symonds (Ophelia Lovibond) and a baby on the way; adult children with whom he would like to have a better relationship; money worries; erratic colleagues; finally the case of the Covid which saw him himself hospitalized. (Incendiary quotes from his time in journalism appear in dream sequences, tormenting his conscience.)

I can see people might say we went too easy, Winterbottom said. We absolutely wanted to humanize it. The Boris part of the series eventually becomes speculative. So our Boris is more thoughtful than he probably is in real life. Perhaps our version is closer to the person Britain would have liked him to be.

The series ends with the ebb of the first wave in June 2020. Filmed and edited throughout the pandemic, the research began in the strange lull of that same summer. Scientists and NHS staff were among those interviewed, with Winterbottom and his team creating a timeline to build a narrative mosaic. Camp Johnson was approached; there was no response, says Winterbottom.

Senior Downing Street advisers were more forthcoming, however, even then. I was surprised at how willing they were to talk. But I realized that I had been naive about the spades. I had always assumed that they had real specialist knowledge, but in fact they are all former journalists and communication people. So talking is what they do.

On paper, the logic behind the series is obvious. Winterbottom has long zigzagged between conventional fiction and drama grounded in current events. His films include The face of an angeltelling the case of Amanda Knox, and Greed, with Steve Coogan playing a proxy for fallen Topshop impresario Philip Green. And This England presented as fiction based on real events is the kind of project the television industry feels good about producing, an epic of the moment putting cats among pigeons. But what is less obvious is for whom or what it is really made: an audience or the record?

Winterbottom doesn’t see the issue as either. I just think UK TV should at least try to capture something as important as what the country has been through.

He also knows that the buzz surrounding the series comes from the promised glimpse behind the curtain in a famously chaotic number 10. For many, the resulting image of chat rooms and bitter rivalries will already seem familiar. It still makes viewing terribly compulsive.

But as a snapshot of locked Downing Street, you also note the lack of office parties that would later help undo Johnson. News of them was yet to be known at the time of writing the script. Even when it happened, however, Winterbottom resisted changing his storyline. Only one part fell within the deadline, he argues, which was always designed to end with the revelations surrounding Dominic Cummings’ trip to Barnard Castle. And dramatically, he says, the parties would only echo a point already raised by this first scandal. The public discovery that the people making the rules weren’t following them all started with Cummings, says Winterbottom.

The prime minister’s former senior adviser may be a particularly unhappy bystander. His portrayal here is somewhat removed from the electoral savant played by Benedict Cumberbatch in another political re-enactment, 2019 Brexit: the uncivil war. Now played by Simon Paisley Day, this Cummings is not just a work nightmare, but an emptier vessel than is often imagined. A key role is played by the personal blog illicitly republished to give the impression that he had planned Covid before the pandemic.

Yet he could also see the series as vindication. A key part of Winterbottoms’ search is a Russian doll of state dysfunction, starting with Cummings who loudly complained about Downing Street’s physical flaws.

Obviously, this government had a special character, but the problems run much deeper, says Winterbottom. Number 10 itself makes no sense as the center of government, an upstairs apartment over a few cramped offices. But the NHS also has all these structural problems, because it has been reformed to be both a set of autonomous bodies and a descending pyramid. The common thread is paralyzing complexity.

If 2020 was a test for everyone, Winterbottom was no exception. Greed was released in February of that year; Covid had already reached the UK. During the summer he worked on This England when his mother was rushed to hospital in Blackburn, the family’s hometown in the North West. Local hospitals were still not admitting visitors. While her brother was eventually allowed to see her, she unexpectedly died before Winterbottom could. It’s strange. At the start of the lockdown, I had heard stories about people not being able to visit relatives in the hospital, and I remember thinking: Well, I would never let the bureaucracy stop me. And then I found myself in exactly this position.

Still, This England be careful not to blame. We have taken great care not to editorialize. Which is tricky in a six-hour drama when you show so many crucial decisions made or not made. For all the appeal of the Downing Street psychodrama, it also keeps the lens broad, leaving room for less famous lives caught in the national crisis. When I was writing I realized I was absolutely as interested in what was going on in Nottingham care homes as I was in the inside of Boris Johnson’s head, says Winterbottom.

But of course, this mystery still demanded attention. This has always been Johnson’s gift. As Branagh’s blonde likeness now attracts viewers, the conversation keeps returning to the original. An inevitable question to finish: does Winterbottom expect a political comeback, a sequel to Downing Street? You know, I don’t really think so. Doesn’t he just want to go away and make a lot of money?

On Sky Atlantic and Now from September 28

Why Arab States’ Current Oil Boom Could Be Their Last