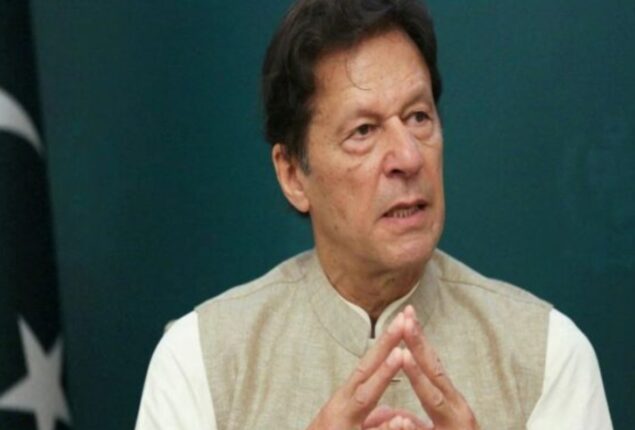 Imran Khan has made a conditional return to Parliament.

ISLAMABAD: Pakistan Tehreek-e-Insaf (PTI) President Imran Khan has made a conditional return to the National Assembly if the US cipher is investigated.

In an informal conversation with journalists in Islamabad, Imran Khan wishes good relations with everyone, including the United States and India, in the national interest.

The former prime minister said the PTI was ready to return to parliament if the US cipher, which he said was used as a foreign plot to bring down his government, was investigated. “If the US cipher is investigated, we can go back to the assembly,” he said.

The PTI leader further said that he wants cordial relations in the region in the national interest. However, he warned that they would not allow New Delhi’s superiority and hegemony in the region, adding that Indian Prime Minister Narendra Modi was intent on breaking up Pakistan.

He also warned that he will permit any foreign policy regarding the recognition of Israel. “I want relations with the United States within the framework of national interests,” he added.

Regarding Prime Minister Shehbaz Sharifs’ speech at the 77th session of the United Nations General Assembly (UNGA), Imran said that Shehbaz’s speech was an announcement of the nation’s bankruptcy.

“Miftah Ismail had sunk the ship of the country. The current government has brought the economy to such a point that it requires surgery instead of medicine. Miftah treats cancer with dispirin,” he added.

He said the government’s priority was not to revive the economy but to put an end to its corruption affairs. He mentioned that the current government has closed the NAB cases of Rs 1100 billion.

He added that Ishaq Dar planned to return home as soon as the NAB matter was over, while Nawaz Sharif was also preparing to return.

Imran Khan further said that they are drawing up a comprehensive plan to stabilize the economy. He said they came to government for the first time, so mistakes were made.

On March 27, the former prime minister accused the United States of interfering in Pakistani politics and plotting to oust his government through a no-confidence motion in the National Assembly.

He quoted a diplomatic figure from Pakistan’s Ambassador to Washington, Asad Majeeds, meeting with the US Under Secretary of State for Central and South Asia regarding the vote of no confidence against him.

He issued a “threatening letter” saying a “foreign country” had warned of the dire consequences of his continued rule. He called for an investigation into the cipher to probe the foreign conspiracy against his government.

JHELUM: Pakistan Tehreek-e-Insaf (PTI) President Imran Khan has said he will continue to…

Ahead of the U-20 World Cup, Minister of Youth and Sports Amali calls for the performance of the Indonesian national team to be further improved