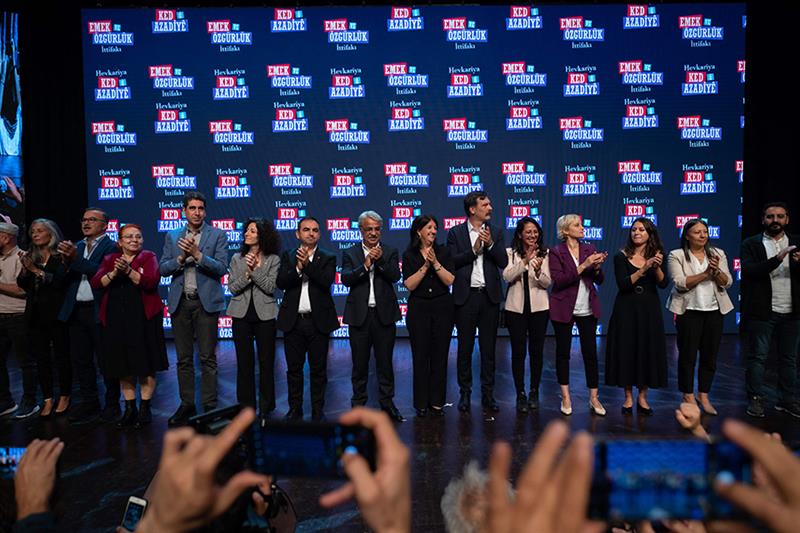 Labor and Freedom Alliance at the launch of the six-party coalition in Istanbul (photo: AFP)

The popularity of Turkish opposition parties has increased significantly over the past year. This trajectory is recorded in a series of surveys conducted by Turkish research and polling organizations. For example, in July 2022 Metropoll’s “Turkish Pulse” survey found that Turkish President Recep Tayyip Erdogan now has considerably less popular support than any of his potential rivals in the 2023 presidential elections. found that in a second round of elections pitting Erdogan against one of the five opposition candidates, Erdogan would get around 42% of the vote, while Mansur Yavas, the current mayor of Ankara, would get 53, 9%; Ekram Imamoglu, member of the opposition Republican People’s Party (CHP) and current mayor of Istanbul, 48.6%; Merel Aksener, leader of the centre-right IYI (good) party, 46.4%; Kemal Kilicdaroglu, head of the CHP, 45.4%; and Ali Babacan, a former member of the ruling Justice and Development Party (AKP) and current leader of the breakaway Democracy and Progress Party (DEVA), 44.5%.

Alarmed by this decline, the AKP government has taken several measures to reverse the trend. First, he introduced some changes in party structures and policies in order to consolidate the party’s support base and win back voters. Second, he began campaigning to change electoral laws to shape an electoral terrain more favorable to AKP candidates and the president. Third, he suppressed his political opponents. Most recently, on September 15, Turkish police arrested ten staff members of the CHP-run municipality in the southern province of Mersin, accused of “making propaganda on behalf of a terrorist organization”, according to Halk TV.

There are many possible reasons for the growing opposition to the government, one being the backlash from Turkey’s military interventions in regional conflicts. Opposition forces claim that Ankara’s military adventures abroad have only served to isolate Turkey in its regional environment and have rebounded against the national economy. This applied above all to Ankara’s aggressive intervention in Syria and its policy of opening up to Syrian refugees. The presence of some 3.5 million Syrian refugees in Turkey has aggravated the country’s economic and social difficulties. Large segments of the public directed their anger and frustration at these refugees, calling on the government to deport them. Much public opinion also believes that the military intervention in Libya was a wasteful exercise that unnecessarily drained Turkey’s economic resources.

Ankara’s handling of other foreign policy issues has also haunted the ruling party and its leader. Tensions with the United States have peaked over several contentious issues, including Turkey’s purchase of Russia’s S-400 missile defense system that ultimately led to its exclusion from the Pentagon’s F-25 program and sanctions imposed by Washington in December 2022 under the Countering America’s Adversaries Through Sanctions Act (CAATSA).

The issue of a divided Cyprus is another contentious area. In September this year, the United States lifted its embargo on arms sales to Nicosia, a step that Turkish opposition parties see as proof that the government’s relationship with Washington is still on sandbanks. .

Turkish-European relations have also been strained against the backdrop of growing European condemnation of the deterioration of the state of political and human rights and the rule of law in Turkey. Ankara’s illegal behavior in the Eastern Mediterranean has further angered European public opinion.

Meanwhile, the government’s move to arm the judiciary against its opponents and stifle criticism generally has fueled unity within the ranks of the opposition against these repressive and coercive tactics, adding to its arsenal of weapons. policies. At the end of August, Turkish pop star Gulsen Colakoglu (46) was jailed for “inciting hatred and enmity” over a joke she made about religious schools called Imam Hatip. She was released four days later and placed under house arrest. Opposition circles have seized the opportunity to attack the Islamist-oriented government, many of whose members are graduates of these schools, originally founded to educate imams. Most recently, on September 21, an Istanbul court adjourned the trial of Ekram Imamoglu, a member of the CHP, accused of insulting members of the Turkish High Electoral Council (YSK) during a speech he gave. in 2019 when he was a candidate for mayor of Istanbul. It defeated the AKP candidate in the municipal elections by a clear majority, but the YSK overturned the results and ordered a rerun, which it then won by an even larger majority. Tight security surrounded the courthouse after the government banned protests in support of it.

Rounding up CHP officials on terrorism-related charges is a significant escalation from the usual weapon of prosecuting them for “insulting the president” and the like, and therefore an indicator of the threat that the ruling party and its leader feel about this leadership of the main opposition party. Previously, he had primarily used terror charges to carry out mass purges of the judiciary, education system and other government institutions in the name of rooting out the Gülen movement, which Erdogan says orchestrated the coup attempt. State of 2016. He has also systematically targeted the pro-Kurdish People’s Democratic Party (HDP) which he regularly accuses of links with terrorism, that is to say the Kurdistan Workers’ Party (PKK). Hundreds of HDP members and officials, including two former co-chairs, have languished in prison for years.

The worsening economic decline has hampered the government’s ability to stem the growing popularity of opposition parties who decry the freefall of the lira, high inflation and soaring unemployment. Moreover, they accuse the government of aggravating the crisis with lavish spending and reckless borrowing. Turkey’s external debt now stands at TL 1.9 trillion, nearly eight times the TL 243 billion of 18 years ago when the AKP came to power. Critics accuse Erdogan of deepening the vulnerability of Turkey’s economy by eroding the autonomy of the Turkish Central Bank and imposing his personal aversion to rising interest rates on the bank’s monetary policies. As living standards deteriorated, household purchasing power declined and consumption and production contracted. Opposition forces have continually called on the government to revise its economic policies based on the advice of experts, not ideologues.

As the 2023 elections approach, the opposition is expected to gain ground, especially given the president’s declining popularity, even within his own party, mainly due to his government’s economic mismanagement and the repercussions negative political and economic aspects of its foreign policy. Simultaneously, however, an already unprecedented level of polarization will become even more acute as pressures mount from an array of domestic and international issues, all of which will generate a highly charged electoral climate.

*A version of this article appeared in the September 29, 2022 edition of Al-Ahram Weekly.

‘Juggernaut who has nothing to do with running for president’: Trump-DeSantis cold war turns into insults