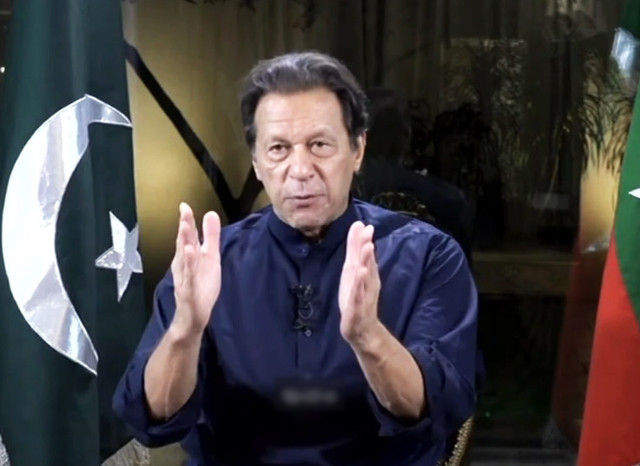 PTI chairman and ousted prime minister Imran Khan argued on Tuesday that only early elections could avert the imminent “economic collapse” of the country.

He warned that Pakistan was headed for default, pointing out that the risk of it happening had risen to 64.5%.

“The question is who is responsible for this economic collapse,” the former prime minister told a rally.

The PTI chief was referring to Pakistan’s default risk, as measured by the five-year currency default swap (CDS) index, which had climbed 4.2% to a new high of 64.5%.

“When our government was overthrown by a regime change plot in April [this year]the risk of Pakistan taking loans from abroad was less than 5% and today it has risen to 64.5%,” the PTI chief noted.

“This means that our country lacks resources to cope with growing import payments and external debt repayments on time,” he added.

Interestingly, the head of the PTI did not mention the impact of the recent devastating floods in various parts of the country.

He said the new figures suggested there was a strong chance that Pakistan would not be able to repay its debts. “[This] indicates that the current government has destabilized the economy,” he said.

“In this gloomy environment, foreign investors will be reluctant to invest in Pakistan and no one will be willing to lend us more loans,” he added.

He blamed the Sharif and Zardari families for the “massive” loans taken out during their tenure.

At the rally, the PTI leader feared that the rupee would devalue further if the country defaulted, adding to the woes of the people. “They [the people] are already facing unprecedented inflation which rose from 16% to 27% by the time we left government,” he added.

Imran slammed the current government for “murdering” Pakistan’s economy over the past seven months.

He asked the “managers” of the incumbent government who was responsible for the country’s economic collapse.

The PTI leader reiterated that when his party was ousted from power, the country’s economy was growing and according to the Economic Survey (2021-22) released by the current government, all sectors showed a “huge growth”.

“As Pakistan was making progress on all economic fronts, what was the logic behind our government’s withdrawal?” he asked.

He claimed that six months ago he warned “managers” that the plot to bring PML-N to power would be detrimental to the company.

He maintained that if Pakistan defaulted on its loans, it would not affect Prime Minister Shehbaz Sharif and his company.

“Only national security will be compromised,” he added.

“If people still think the current government can solve economic problems, I ask them who brought Pakistan to this stage in the first place,” he said.

“The only solution to the economic crisis in the country is free and fair elections,” he said, without giving further details on his request.

“He [Nawaz] wants the new army chief to disqualify me from national politics. He repeated again how a convict (referring to Nawaz) could make decisions on sensitive issues regarding Pakistan’s national security.

Imran lambasted the incumbent government for consulting Nawaz on the appointment of the new army chief of staff (COAS).

He claimed that Nawaz was not capable of making decisions on merit, as the leader of the PML-N always gave “preference to his personal interests over those of the country”.

Separately, while simultaneously addressing participants of the PTI’s ‘Haqeeqi Azadi March’ in Sarai Alamgir, Chiniot and Swabi via video link from Lahore, Imran again alleged that the Election Commission of Pakistan (ECP) was working on a program against his party.

“Not only is it [ECP) close to the PML-N, but also its handlers,” he added.

He claimed that Chief Election Commissioner (CEC) Sikandar Sultan Raja had passed decisions against his party eight times and all of them were rejected by the judiciary.

The PTI chief termed the lack of justice as the root cause of all the country’s ills. He urged  Chief Justice of Pakistan (CJP) Umar Ata Bandial to deliver justice.

Imran underscored that real independence came through the rule of law and justice. “All issues in Pakistan are linked to the justice system in the country. The law of jungle has turned the people into slaves,” he maintained.

“I once again humbly request you [CJP] that these three cases – the assassination of famous journalist Arshad Sharif, the torture in custody of Senator Azam Swati and the FIR recording of the Wazirabad attack are of historical significance,” he said.

“Mr. Chief Justice, we look to you because we have no hope anywhere else. It is high time for the courts to stand up and stand with the people of Pakistan,” he added .