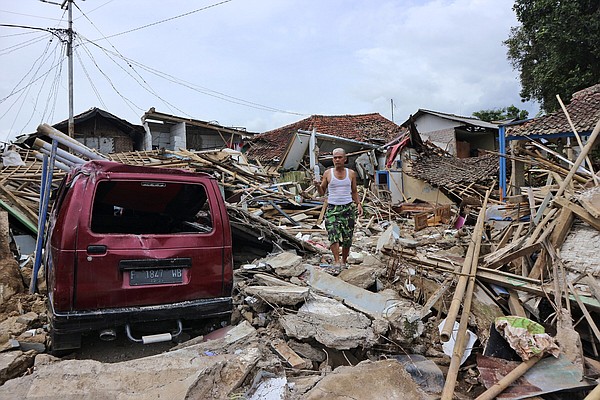 BRASILIA, Brazil — A former student armed with a semi-automatic pistol and wearing a bulletproof vest shot and killed two teachers and a student, and injured 13 after bursting into two schools on Friday in the south- eastern Brazil, authorities said.

The shootings took place at campuses on the same street in Aracruz, Espirito Santo state, the state’s public security secretariat said in a statement.

About four hours later, the shooter, identified as a 16-year-old boy who was studying at public school, was arrested by police, Espirito Santo Governor Renato Casagrande said. Authorities have not released the name of the suspect.

In addition to the dead, 13 people were injured, including nine instructors, said Celante, who noted that at the public school the shooter gained access to the staff room after breaking a lock.

CIANJUR, Indonesia — The death toll from the earthquake that struck the Indonesian island of Java earlier this week has risen to 310 after rescuers found more bodies under landslides, an official said. . At least 24 people are still missing.

Bodies were found Friday in two areas of the mountainous district of Cianjur where landslides triggered by Monday’s earthquake brought tons of mud, rocks and broken trees, said Henri Alfiandi, head of the Agency. National Search and Rescue.

More than 1,400 rescuers have searched the rubble since the 5.6 magnitude quake injured more than 2,000 people.

Suharyanto said distribution of food and other aid is improving and reaching more people in 110 evacuation locations.

The disaster management agency said the quake damaged at least 56,000 homes and displaced at least 36,000 people. Hundreds of public facilities were destroyed, including 363 schools.

BAGHDAD – Iran has sent additional special forces units to fortify its northern border with Iraq and crack down on what it says is infiltration by Kurdish opposition groups, Iranian state media reported on Friday.

The deployment aims to prevent the infiltration and smuggling of weapons into the north by exiled Kurdish opposition groups in Iraq which Tehran says are orchestrating anti-government protests. This is a claim that Kurdish groups deny and, to date, Iran has provided no supporting evidence.

Iran has several military bases near the Iraqi border and has had forces there on a rotating basis for decades.

The troop movement also comes after Iraq issued directives to tighten security along its border to prevent further bombardment by Iran, according to a statement issued by Iraqi military spokesman Gen. division Yahya Rasool. Kurdish opposition groups have bases in the Kurdish-ruled northern region of Iraq.

ISTANBUL — Turkish police broke up a rally calling for an end to violence against women and Turkey’s return to a treaty to protect them, arresting dozens of people on Friday.

Protesters attempted to march along Istanbul’s main pedestrian street, Istiklal, to mark the November 25 International Day for the Elimination of Violence against Women, defying an order by authorities banning the rally for reasons of security and public order.

Police blocked protesters from entering the streets leading to Istiklal, surrounded groups of protesters and then apprehended them. An Associated Press reporter saw three buses full of detained protesters being taken to a nearby police station.

Istanbul’s governor’s office announced on Friday that it was banning the installation of concerts, exhibitions and food stalls on Istiklal.

Earlier this year, parliament passed a bill increasing prison sentences for crimes where the victim is a woman and making stalking a crime punishable by imprisonment.

Speaking at an event marking the international day, Turkish President Recep Tayyip Erdogan pledged to “constantly raise the bar” in preventing violence against women. Yet human rights groups say the measures in place do not adequately protect women or hold perpetrators accountable.

At least 349 women have been killed so far this year in Turkey, according to advocacy group We Will Stop Femicide.

Riot police surround a group of women protesting on Friday to mark the International Day for the Elimination of Violence against Women, in Istanbul, Turkey. (AP/Kemal Aslan)