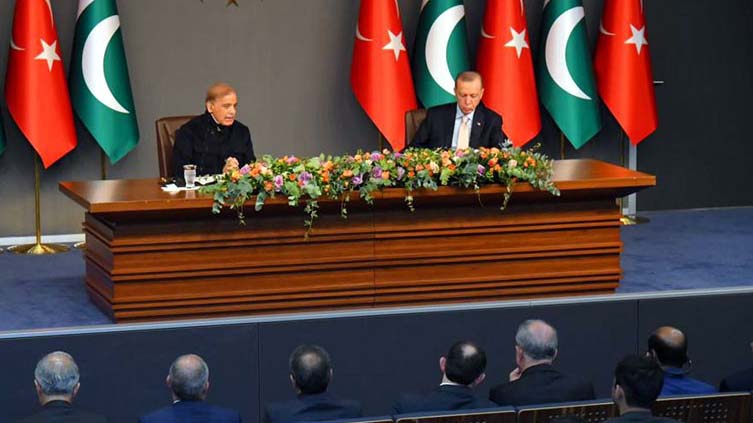 Prime Minister Shehbaz said Pakistan is ready to cooperate fully for the elimination of terrorism.

ISTANBUL (Dunya News) – Prime Minister Shehbaz Sharif is on a two-day tour of Turkey to inaugurate the Milgem Corvette ship, PNS Khyber. During his speech on Saturday, he said that a common strategy is needed to fight terrorism.

He said Pakistan is ready to cooperate fully for the elimination of terrorism.

The Prime Minister said that terrorists have no religion, they are inhuman people. He also added that Turkey has also been a target of terrorism like Pakistan, while Pakistan has made great sacrifices in the war on terror. he said we stand with Turkiye to end the threat of terrorism. “Every section of society has sacrificed to defeat terrorism,” he said.

Prime Minister Shehbaz urged Turkish companies to invest in Pakistan as the endless potential between the two brotherly countries should also be reflected in bilateral trade and business.

Addressing a Turkey-Pakistan Business Council meeting, the prime minister said his government will no longer tolerate hitches and obstacles to investment by foreign investors, including the Turkish brothers.

He assured that his government will fully provide a hassle-free and red tape-free environment for Turkish investors.

He informed that during his meeting with President Recep Tayyip Erdogan, it was indicated that more Turkish companies are eager to come to Pakistan.

The Prime Minister said it was regrettable that under the previous regime, Turkish companies that invested in Pakistan did not receive the payments due to them. Similarly, this was the case with Turkish airlines operating in Pakistan.

The Prime Minister said such lethargy and bureaucracy was not acceptable to his government and the people of Pakistan as they had benefited from Turkish investment and support.

“I want to convey this message to all, through you, that we are brothers and family and that we will not tolerate such hitches and obstacles that harm our bonds,” he said, and assured that his government would remove all problems and solve their real problems. .

He said to further promote their bilateral trade and commerce relations, work on the “trade and goods agreement” between the two brotherly countries would be accelerated.

He said they had signed a memorandum of understanding to increase bilateral trade volume up to $5 billion over the next three years.

Turkey’s annual trade was around $250 billion and the trade between Pakistan and Turkey hovered around one and a half billion dollars, which was a peanut considering the huge potential, he added.

The Prime Minister stressed that such a scenario did not reflect their exemplary brotherly bonds and insisted on full exploration of the undefined potential on both sides.

He said they should make efforts and strive to double this business volume in the next three years with strong commitment and sincerity, because “only hard work and tireless efforts will be the key to a wonderful success”.

Speaking on the occasion, President Erdogan said that MILGEM is one of the major mutual cooperation projects that manifests our relationship with brotherly Pakistan in the defense industry.

He said that we will support Pakistan’s efforts against terrorism. Speaking about the huge losses suffered by Pakistan in the recent floods, he said his country had sent humanitarian goods and medicine for those affected by the floods.