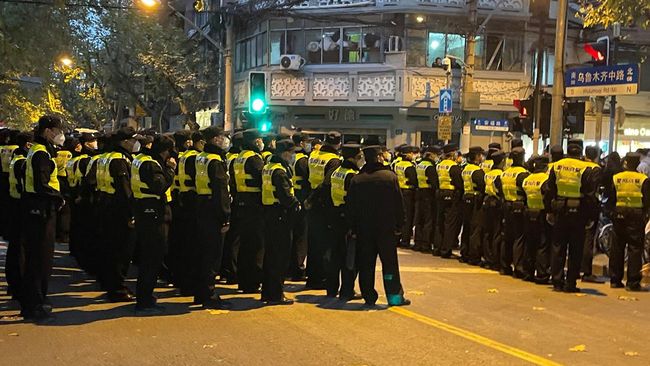 Jakarta, CNBC Indonesia – Protests over China’s tough Covid-19 restrictions spread to more cities, including the financial hub of Shanghai, on Sunday, nearly three years after the pandemic began, a fresh wave of anger sparked by a fire murderer in the westernmost tip of the country.

Reported CNBC International, a fire that killed 10 people Thursday in a skyscraper in Xinjiang’s capital, Urumqi, sparked widespread public outrage. Many netizens suspected that the building had been partially blocked off, preventing residents from escaping in time. However, on this matter, city officials have denied the problem.

The fires sparked a wave of civil disobedience, notably in Urumqi on Friday, unprecedented on the Chinese mainland since Xi Jinping came to power ten years ago.

In Shanghai, China’s most populous city, residents gathered on Urumqi Street on Saturday evening, turning into protests in the early hours of Sunday. A large group of police watched as the crowd held up a blank sheet of paper as a symbol of protest against censorship.

According to a video circulating on social media, they then shouted, “Unblock Urumqi, unblock Xinjiang, unblock all of China!”

At another point, a large group began chanting “Down with the Chinese Communist Party, overthrow Xi Jinping”, in a rare public demonstration against the Chinese leader, according to witnesses and videos.

China is sticking to its zero Covid policy, even as most of the world tries to coexist with the coronavirus. China’s case count is low by global standards, but nearly 40,000 new infections were recorded on Saturday, hitting a multi-day high.

China maintains its zero Covid policy, signed by President Xi, as saving and necessary to prevent the health system from being redundant. Officials vowed to continue, despite mounting public opposition and growing pressure on the world’s second-largest economy.

On Sunday, Xinjiang officials said public transportation in Urumqi would gradually resume from Monday. Its 4 million residents have been confined to their homes for up to 100 days in China’s longest lockdown.

Widespread public protests are rare in China because there is little room for dissent under Xi Jinping, and citizens are forced to vent on social media, where they play cat and mouse with censors.

More than a month after Xi Jinping won his third term as head of the Chinese Communist Party, discontent is at its height.

“It will put serious pressure on the party to respond. One response will likely be a crackdown, and they will arrest and try some of the protesters,” said Dan Mattingley of Yale University, an assistant professor of political science. 2022).

In the northwest city of Lanzhou, social media posts showed residents toppling Covid staff tents and vandalizing a testing site on Saturday. Protesters say they are locked down even though no one has tested positive.

Candlelight lighting for victims in Urumqi took place at universities in cities including Nanjing and Beijing lit up all night.

Video from Shanghai shows crowds facing police and chanting ‘Serve the people’, ‘We want freedom’ and ‘We don’t want health codes’, a reference to cellphone apps that must be scanned to entering public places across China.

However, the Shanghai government did not immediately respond to a request for comment on Sunday.

The city of 25 million people was shut down for two months earlier this year, sparking anger and protests.

Chinese authorities have since sought to be more targeted in Covid containment, efforts that have been resisted by a spike in infections as the country faces its first winter with the highly transmissible variant of Omicron.

On Friday evening, crowds took to the streets of Urumqi, chanting “End of lockdown!” and throwing fists in the air after the fire, according to videos on social media.

In Beijing, 2,700 km (1,700 miles) away, some residents under lockdown staged small protests or confronted local officials on Saturday over restrictions on movement, with some successfully pressuring them to lift restrictions more sooner than expected.

A video shared with Reuters shows Beijing residents marching through an unrecognizable part of the capital on Saturday, chanting “End of lockdown!”

However, once again, the government in Beijing has still not responded to the request.

The Guardian’s view on Modis India: the danger of exporting Hindu chauvinism | Editorial