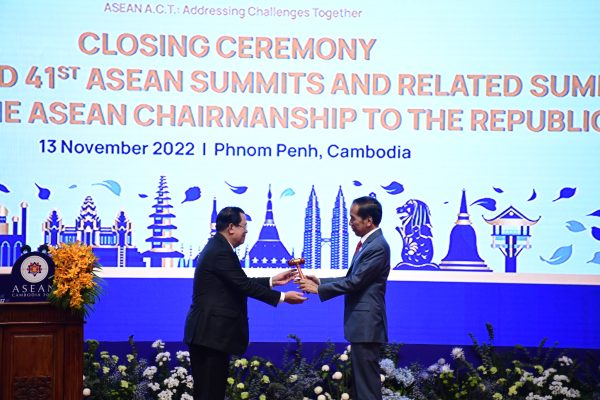 According to Burmese mythology, there was once a bet between two friendly deities: Sakra, king of the Devas, and Arsi, king of the Brahmas. Sakra won and Arsi decapitated as previously agreed. Sakra didn’t want the head but couldn’t get rid of it either. If the head entered the water, all the seas would evaporate. And if he fell to the ground, the earth would burn. Sakra thus deputized for seven angels, each to hold the problematic trophy for a year and then pass it on to the next. The Burmese metaphor of the head of Brahmas (Bhyamah oo-gaung) is derived from this myth and is used to refer to a problem that no one wants but has to cling to.

After the coup, Myanmar became something of a Brahma leader for the Association of Southeast Asian Nations (ASEAN). Member States pushed and pushed for a year during their respective presidencies, hoping for progress on the Five point consensus (5PC) peace plan, inevitably shrug their shoulders in dismay, then pass the burden on. Brunei did in 2021, as did Cambodia this year. It will soon be Indonesia’s turn in 2023. The major powers have stayed away from the quagmire, throwing the puzzle back to ASEAN by emphasizing its centrality and responsibility to deal with the eternal black sheep groups.

Despite all its efforts, ASEAN has few concrete achievements to show them. When initially announced in April 2021, FP5 raised premature hope that Myanmar’s chaotic descent into conflict could be reversed. Almost immediately, however, junta leader Min Aung Hlaing backtracked and redoubled his efforts to eliminate his opponents by force. Later, the appointment of veteran Singaporean diplomat Noeleen Heyzer as UN Secretary General special envoy for Myanmar fueled cautious optimism that ASEAN could maneuver some sort of breakthrough in coordination with the envoy. Cambodian Prime Minister Hun Sens’ visit to Myanmar in January this year has also sparked talk of possible changes. To date, these efforts have failed with cold rebuffsheated criticaland exasperation.

Given Indonesia’s status as ASEAN’s older brother, its own Reform away from military dictatorship, a decade-long buildup of anger over the plight of the Rohingya, and President Joko Widodos’ efforts to shape his political legacy, Indonesia is certain to step up censorship and pressure on the junta in 2023. Indonesia has already offered to extend the to forbid on junta officials beyond ASEAN summits. Campaigners are now urging Indonesia to recognize the parallel National Unity Government (NUG), hoping that international recognition will pave the way for substantial military assistance. The Changing Language in ASEAN Leaders’ Recent Review and Decision on FP5 noted ASEAN adopts a more flexible approach as well as a relative hardening vis-a-vis the junta.

Still, it remains to be seen how effective a more outspoken approach will be in actually stopping the bloodshed. Despite the constant stream of experts and reports indicating that the junta is on the verge of collapse, the civil war in Myanmar currently has no certain outcome.

At this point, the State Administrative Council (SAC) junta and the NUG still believe that they can militarily defeat the other. Driven by their respective echo chambers, both sides say they are winning. Even as civilian casualties mount and the population is increasingly pressured from all sides, public statements from both sides contain few signs of fatigue or reassessment.

Within the Tatmadaw, there is no discomfort with the brutality but with Min Aung Hlaings who perceived the softness and the indecision in the crushing of the resistance. Enraged by Tatmadaw’s continued atrocities, the resistance insists on all-out people’s war not only to overthrow the junta but also to eradicate the military completely from Myanmar’s political life. During this time, no less than 28,000 have died, more than a million are displaced and 15 million are in need of humanitarian aid.

This will be anathema to the resistance and its supporters, but ASEAN member state governments likely believe the junta still has the upper hand and will therefore hedge their options accordingly. They will also consider that a misreading of the tea leaves could exclude ASEAN from any limited role it can play. Worse, it could unwittingly pave the way for China to further undermine ASEAN unity amid rising geopolitical tensions. ASEAN’s threats to recognize the NUG reflect its need to pressure the SAC to honor its commitments rather than real conviction.

ASEAN also has its hands tied when interacting with both sides. Grouping approaches engagement as a means of defusing, while both sides treat recognition as a nudge that will help them win the conflict. ASEAN tried to treat SAC like an adult, but that obviously didn’t work. But amid all the claims and counterclaims, the obstinate junta remains fully capable of inflicting significant pain and suffering on the remaining resistance forces. uncoordinated and underarmed. And anything short of direct military involvement is unlikely to change the reckoning in a timely manner.

The SAC adopted a bunker mentality and threats of isolation will not force him to back down. Isolationism was the standard that senior military officials grew up under during the dictatorship of General Ne Win, who rejected ASEAN membership in 1967. Threatening with expulsion from ASEAN could backfire on him and the junta could happily To go for a walk, leaving ASEAN without any influence. The regular whipping statements show that the junta wants legitimacy through ASEAN, but this will always fall short of guaranteeing its control over the country.

Things are more complicated on the resistance side. The NUG walks a delicate balance attractive for recognition and welcoming developments while expressing disappointment to ASEAN’s inaction. It must also weigh international pressures against minimizing the socio-economic impact of such measures on the population. Plus, he has to shout out to a cacophony of more militant voices and controversial influencers who profess affiliation but hawkish rhetoric that limits the NUG’s room to manoeuvre.

While the situation has degenerated into a fire war of which the NUG itself claims ownership and speaks of intensification, explicit recognition is now less obvious to foreign governments and groupings than it otherwise would have been. There is also a deep-rooted lack of trust in ASEAN, because activists have long accused the grouping of shielding military abuses and member states of profiting from Myanmar’s woes. Even current statements are seen as selfish token efforts to rescue the image of ASEAN rather than gestures of genuine solidarity.

That said, ASEAN remains the only viable platform with which warring parties can engage. Talking to just one side of a spiraling civil war, be it the junta or the resistance, is useless. And the overriding focus of any interaction with either side should be to defuse violence and facilitate humanitarian assistance. ASEAN options should not be trapped in a false dichotomy of simply acknowledging and talking to one side. Establishing a genuine ASEAN envoy decoupled from the current annual rotation would help provide something more concrete. And even then, it will be a thankless job.

Despite all the misfortune and sadness of holding the head of Brahmas, there is also a hopeful symbolism attached to it. The changing of hands from one wearer to another is said to mark Thingyan, the traditional Burmese New Year where past failures are left behind for a fresh start. And Sakra, unable to bear to see his headless friend, placed the head of a passing elephant on Arsis’s body, thus creating Maha PeinneBurmese version of Ganesha the Hindu god attributed as the remover of obstacles. Perhaps while maintaining this burden over the coming year, Indonesia could completely shake off that Brahmas head and restore some momentum to the FP5 process.