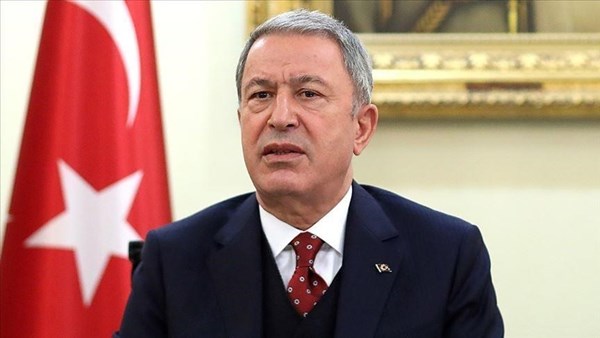 Turkish Defense Minister says Turkey is “the only country to fight Daesh” closely.

Turkish Defense Minister Hulusi Akar said on Thursday that Turkey had warned its allies against supporting Kurdish groups for any reason, including under the pretext of fighting the terrorist organization ISIS.

Akar told reporters that “during the recent talks with the allied countries, necessary warnings and reminders were given to them not to support the PKK/KCK/YPG, a bloody terrorist organization that attacks our borders and our people, for whatever reason, including under the pretext of fighting Daesh/ISIS, not to allow the use of their own flag and uniforms which would make them difficult to distinguish from terrorists, to keep terrorists away from their areas, and to cut all relations with terrorist organizations as soon as possible.”

Akar claimed that the Kurdistan Workers’ Party (PKK) had recently targeted civilian settlements and carried out “despicable and bloody” attacks against innocent citizens.

He said that “the attitudes of those who perceive the Daesh/ISIS terrorist organization as a danger thousands of miles away, about our necessary measures against terrorist organizations that target our civilian settlements, including schools, and massacre our innocent people, are unacceptable. “

Commenting on US statements on Ankara’s possible ground offensive in Syria, Akar said: “They asked us to reassess. We also explained our sensitivities and wanted promises to be kept. We stressed that they had to to understand”.

On November 20, Akar announced that Turkey had launched the “Operation Claw-Sword” offensive against PKK militants in northern Iraq and Syria.

The Turkish Defense Ministry claimed that the offensive was carried out in accordance with the right of self-defense guaranteed by Article 51 of the United Nations Charter.

Later, Turkish President Recep Tayyip Erdogan signaled the possibility of Ankara carrying out a ground offensive against the PKK.

Turkish presidential spokesman Ibrahim Kalin recently told Turkish media A news that the ground offensive could be launched at any time, and Erdogan stressed that his country is committed to destroying the PKK “until its last militant is neutralized”.

Akar argued that the PKK had stepped up its attacks aimed at disrupting peace and stability in northern Syria, saying Turkey was “the only country fighting ISIS” at close range.

“Turkey, which has neutralized 4,500 radical Daesh terrorists in northern Iraq and Syria, is ready for all kinds of cooperation to fight Daesh and all other terrorist organizations,” said Turkish Minister of Defense.

Of note, the US Department of Defense has expressed concern over recent increases in military activity in northern Syria, Iraq and Turkey, citing the danger they pose to efforts to defeat the Islamic State.

Senior Russian negotiator Alexander Lavrentyev also said Russia had asked Turkey to refrain from a large-scale ground offensive in Syria because such actions could trigger an escalation of violence.