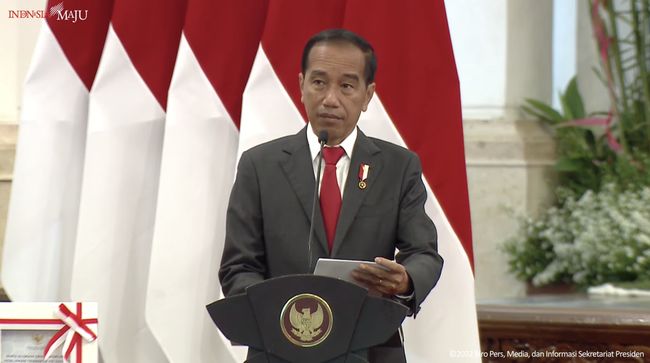 Jakarta, CNBC Indonesia –The United States (US) and China, the two economic giants of the world are experiencing an economic downturn. Almost all analysts and economists predict that the United States will experience a recession next year.

“Therefore, in 2023, we really have to be vigilant. I agree, we have to be optimistic, but we have to be cautious and alert. The first is that Indonesia’s exports this year last year have a lot jumped, but be careful that next year it might go down,” Jokowi said during a speech at Bank Indonesia’s (BI) annual meeting on Wednesday (11/30/2022).

Based on recordings from CNBC’s research team in Indonesia, Jokowi said the word “watch out” 9 times in 15 minutes.

This implies serious problems that Indonesia could face next year. The Indonesian economy has benefited from strong exports this year, mainly due to high commodity prices.

Indonesia’s trade balance has recorded a surplus for 30 consecutive months. In addition, with high commodity prices, domestic industry is of course strained.

Next year the story could be different, China is experiencing an economic slowdown, the United States and even the world is predicted to be in recession. There is a risk that the demand for raw materials will decrease. Without strong demand, the price is also threatened with a fall, the “manna” enjoyed by Indonesia has disappeared.

China is Indonesia’s largest export market, its value from January to October was $51.5 billion and contributed 22.3% of total exports.

Next comes the United States with a market share of 10.4%. Its value during the same period reached 24 billion US dollars.

There is another European Union which is also at risk of recession, Indonesia’s export value to it is $18.1 billion, which is 7.85%.

If the three are combined, total exports amount to more than 40%. So naturally, Jokowi warned next year to be careful. Moreover, not only the three, other countries will also experience the same so the challenges will be tough.

Chief Economist Chatib Basri, said Indonesia should be worried about China as it is Indonesia’s biggest export market.

“Actually, I’m more worried about (the impact) of the Chinese economy than the US economy on us because if China is affected, our (Indonesian) exports will really be affected,” Chatib told the mid-October.

According to him, in the long term, the Chinese economy will suffer new normal Or it won’t grow anymore.

Thus, there is a risk that the demand for commodities from China will not be as high in the long term as it is today.

The impact of the economic downturn has been felt domestically, particularly in export-oriented industries.

The textile and textile products (TPT) industry is the first to suffer.

The economic downturn in export destination countries has triggered a reduction and restriction of orders to TPT factories in the country.

As a result, there has been a decrease in production capacity. Until he provoked employee efficiency, even laying off layoffs.

“Staff reductions have exceeded 100,000. Some have been laid off, reductions in working hours, breaches of contracts, and even layoffs,” he added.

This condition, he said, has occurred in the textile industry from upstream to downstream.

This symptom of employee layoffs has persisted for the past month. Redma said the production capacity of the TPT plant continues to drop even by 50 percent and fears it will continue until 2023.

China ‘throws away’ IDR 1.5 trillion in US bonds, what’s the signal?

War in Ukraine Day 281: Europe’s Top Leader Pushes Xi Jinping to Use His Influence on Putin