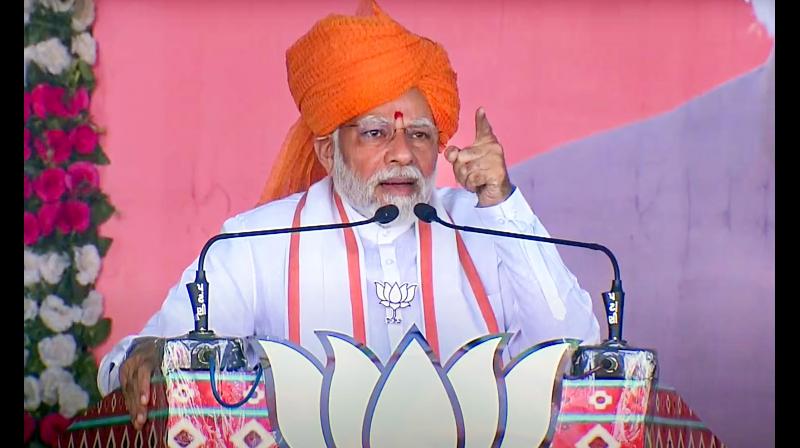 Ahmedabad: On Friday, Prime Minister Narendra Modi asserted that Congress only believes in “atkana, latkana aur bhatkana” (to stall, delay and deceive), and said those who plundered the country’s poor were now abusing him for putting end to corruption.

He also alleged that previous Congress governments had never shown any interest in bringing water from the Narmada River to the parched regions of Gujarat, as the party was only interested in works where it was possible to engage in corruption.

Modi was addressing a rally in Kankrej village of Banaskantha district, where voting for the second phase of Gujarat Assembly elections will take place on December 5.

“Congress only believed in ‘atkana’, ‘latkana’ and ‘bhatkana’. The elderly in this region would tell you how the Congress governments were talking about bringing water from the Narmada to this arid region, but nothing was done on this front during their reign,” he said.

The prime minister accused Congress of trying to block construction of the Sardar Sarovar dam and supporting those who delayed the project through litigation, a veiled reference to Narmada Bachao Andolan (NBA) activist Medha Patkar.

“Can the people of Banaskantha forgive those who indulged in this sin of stopping the water from coming here? The Congress was responsible for keeping Banaskantha thirsty. They must be punished. I hope you won’t forget that when you vote,” Modi said.

“Congress is never interested in these works where their leaders find no opportunity to make money. Since they used to get bribes in relief work where people were tasked with digging pits during drought, Congress did not provide water. Because they knew that if the water was supplied here, their illegal income would cease,” he alleged.

According to him, it was the BJP government that brought the water from the Narmada to this arid region and promised that it would also reach the areas left behind.

The prime minister said his government at the Center had pumped out nearly Rs 1 lakh crore to complete up to 99 water supply systems that were abandoned across the country during Congress rule.

“Grain intended for the poor has been diverted elsewhere. If you rob the poor, Modi will act. And when such people are caught, they start abusing me,” he said.

He said he was confident of the victory of the Bharatiya Janata Party (BJP) in Gujarat the way people participated in the December 1 vote as part of the first phase.
Before addressing the gathering, Modi visited the Augarnath temple in Kankrej and offered prayers.

Referring to Congress’ accusation of tampering with EVM in the city of Patan, Modi said this indicated that the opposition party had already accepted defeat in the Gujarat Assembly elections.

Voting for 89 seats in the first phase of Gujarat elections was held on Thursday.

“The way Congress started blaming EVMs after yesterday’s vote in Kutch, Saurashtra and South Gujarat, it is evident that the opposition party has conceded defeat and accepted BJP to win the elections. Alleging tampering with the EVM is an indication that Congress is about to disappear,” Modi said.

He was speaking at a campaign rally in the northern Gujarat town of Patan where voting will take place with the remaining 92 seats on December 5.

“Congress only knows two things, abusing Modi before the polls to please voters and then blaming EVMs after the vote. This proves that Congress has accepted defeat,” the prime minister said.

He also criticized past congressional governments for “widening” the gap between rich and poor in the country and “looting” funds intended for the welfare of the poor.

“A former Congress Prime Minister used to say that out of 1 rupee sent from the Center, only 15 paise reached the poor,” Modi said, referring to the famous quote from the late Rajiv Gandhi.

“At that time, local bodies, state governments and the Center were run by Congress. The BJP was not in the photo. So which “palm” was responsible for siphoning off 85 paise? he said, in a dig at the congressional ballot symbol (hand).

Cabinet Secretariat of the Republic of Indonesia | Has great potential, President Jokowi: make other countries depend on us