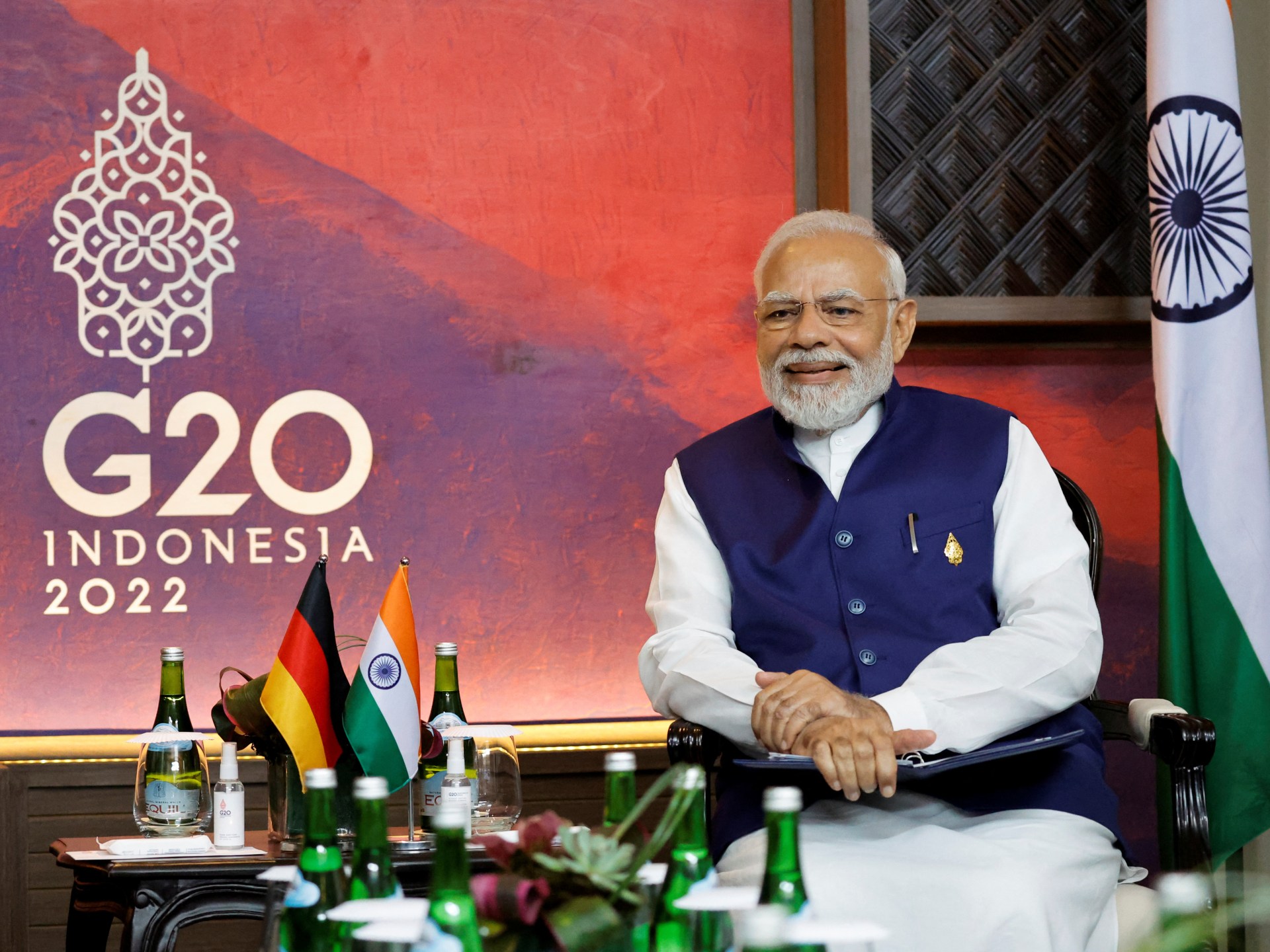 The world must cooperate to fight climate change, terrorism and pandemics, Narendra Modi said as India began its one-year presidency.

India has begun its year-long chairmanship of the Group of 20 (G20), taking over from Indonesia at a time of geopolitical turmoil and uncertainty over post-pandemic economic recovery.

Today we don’t need to fight for our survival, our time doesn’t need to be one of war. Indeed, it must not be one, Prime Minister Narendra Modi said in a statement published in Indian newspapers at the start of the G20 presidency on Thursday.

Formed in the wake of the financial crisis that swept through Southeast Asian economies in the late 1990s as a forum of finance ministers and central bank governors, the G20 was reclassified in 2007 to include heads of state and government.

During and after the 2008 global financial crisis, the coordinated efforts of the G20 helped calm panic and restore economic growth.

The grouping includes 19 countries crossing continents and the European Union, representing around 85% of the world’s gross domestic product (GDP).

What does the presidency of the G20 entail?

The G20 has no permanent secretariat, and one member takes the presidency each year to steer the agenda of the grouping which is split into two strands, one led by finance ministers and the other by leaders’ envoys. of member countries.

After India, Brazil will take over the presidency of the G20, followed by South Africa in 2025.

During his tenure, India will hold more than 200 meetings in around 50 cities involving ministers, officials and civil society, culminating in a marquee summit in the capital, New Delhi, in September 2023.

The summit will bring together around thirty heads of state and government, members of the G20 and invited countries.

What is the future agenda of the G20?

Modi called for international cooperation to tackle global issues, outlining the country’s approach to the G20.

He said in a statement that the challenges of climate change, terrorism and pandemics can be solved not by fighting each other, but only by acting together.

Modi also stressed the need to depoliticize the global supply of food, fertilizer and medical products, so that geopolitical tensions do not lead to humanitarian crises.

His statement reflects New Delhi’s position that the conflict in Ukraine, sparked by a Russian invasion in February, must be resolved through dialogue and diplomacy.

Asked about Russia’s involvement in the G20 during India’s presidency, a spokesman for the Indian Foreign Ministry said that Russia being a member of the G20, we would expect it to participate in this process, the grouping must speak with one voice, especially on important issues that are affecting the world.

What does the G20 mean for India?

The timing of the summit, ahead of India’s general elections scheduled for 2024, could help Modi further cement his reputation as a leader of international stature.

However, the current complex geopolitical and economic situation will make it difficult for India and Modi to shape the international response to multiple crises.

Dhananjay Tripathi, who teaches international relations at the South Asian University of New Delhi, told Al Jazeera that the one-year role will help India globally, but also includes a number of of challenges.

International relations after the pandemic are not very stable and one thing that is on the agenda is post-COVID-19 recovery. Then there is the issue of climate change which is of great interest to India. India can also play a vital role in the Russian-Ukrainian crisis it has already indicated, he said.

Now is the time for India to move from being a rule-maker to a rule-maker, said Rajiv Bhatia and Manjeet Kripalani of India’s Gateway House think tank.

The country hasn’t invested much in multilateral rule-making institutions like the G20, but it’s never too late to start.

Tripathi said the G20 presidency could boost Modis’ image and give him the opportunity to make important interventions on the world stage.

India’s biggest challenge would be to ensure that stability returns to international relations and how to really articulate the concerns of developing countries. It is not easy as the world is increasingly divided, he added.

Stocks open in the red after jobs report