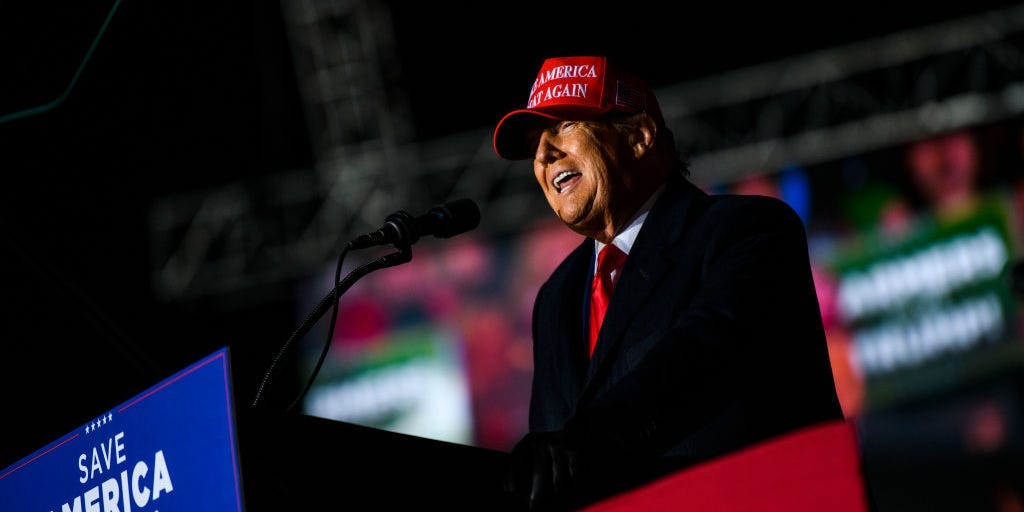 Trust in female leaders is declining across the world, a new study finds. Experts say the normalization of sexism, as well as the perceived failures of some female leaders, may be the reason. This is on top of shrinking childcare options during the pandemic, excluding many women from the workforce. Loading Something is loading.

The past few years have seen a perfect storm of high-level corruption, a lack of childcare options and sexist rhetoric from one of America’s most powerful politicians and it has caused people to lose faith in women leaders.

That’s according to new data from the Reykjavik Leadership Index, an annual survey that gauges how people view men and women in terms of their suitability for positions of power. The survey, which was conducted among more than 30,000 people in G20 countries, found that trust in women as leaders has dropped significantly over the past year.

Only 47% of respondents from the G7 countries of Canada, France, Germany, Italy, Japan, the United Kingdom and the United States said they were “very comfortable” to have a female CEO in their respective countries, down from 54% a year earlier. When it comes to politics, responses to female leaders point in the same direction, with only 45% of G7 respondents saying they are “very comfortable” with a woman leading their government, compared to 52% in 2021. .

The researchers say it’s a perception problem that the pandemic and the current political climate have fueled.

Elizabeth Holmes, the former CEO of Theranos and the world’s youngest self-proclaimed female billionaire, was recently convicted of wire fraud and conspiracy in a high-profile case that captured public attention before and after the fall of the ‘company. Former President Donald Trump has been repeatedly accused of sexual misconduct and seen by most voters as sexist during his presidency, with critics saying his behavior has helped normalize bigotry.

“There are nearly 1.2 million highly skilled women who have not returned to the workforce,” President Biden said in April. “There is a simple reason: there is no affordable daycare for them.”

“We love to vilify women. It’s part of our culture.”

The Reykjavik researchers said the historic appointment of Vice President Kamala Harris to the executive branch, along with the death of Supreme Court Justice Ruth Bader Ginsberg in 2020, helped signal “the importance of the Gender in American Politics” recently. But the glass-ceiling shattering achievements of these women competed with what were seen as the very public failures of others, experts told the BBC.

“We love to vilify women. It’s part of our culture,” Julie Castro Abrams, CEO and president of How Women Lead, an American network of more than 13,000 women dedicated to promoting voice and advocacy, told the BBC. of diverse leadership. “When you get more women to lead, that behavior starts to show because a female leader upsets the accepted narrative that we’ve all been taught and people like to see women fail because a successful woman doesn’t fit the narrative. that we’ve all learned.”

In particular, she pointed out that when Hillary Clinton lost the presidential election to Trump, many media questioned whether America was really ready for a female president. This adds to Trump’s history of racist and sexist comments, which critics and scholars say contributed to the entrenchment of such bigotry.

Another high-profile failure of a businesswoman also caught the world’s attention. In the case of someone like Elizabeth Holmes, women entrepreneurs said they constantly felt compared to the founder of Theranos in the face of the collapse of her business.

“Such serious fraud cases, where in the end false diagnoses were made, make it harder for us to really want to improve women’s health,” said Miriam Santer, co-founder of The Blood, a specialized startup. in menstrual blood tests. told Insider’s Tasmin Lockwood in January.

And around the world, the disproportionate impact of the pandemic on access to childcare means that women are still working less.

Danna Greenberg, professor of organizational behavior at Babson College, told the BBC that women leaving the workforce and taking on the bulk of childcare duties in recent years has led to a “hardening of old assumptions traditions” on the role of women at work and in the home. This, according to Greenberg, made “prejudices against women more socially acceptable”.

This is true even in countries like Canada, which scored the highest among countries in the report: a month after the country’s COVID lockdown began, women’s participation in the labor force rose from an all-time high at its lowest level in 30 years, with more than 1.5 million women. lose their job.

“Perception matters: it manifests itself in numerous and growing inequalities in all aspects of society, government and business,” the researchers wrote. “It impacts career paths, interrupting earning potential and access to basic livelihoods.”

Prom Dresses Will Be Given Free to Molokai Students | News, Sports, Jobs