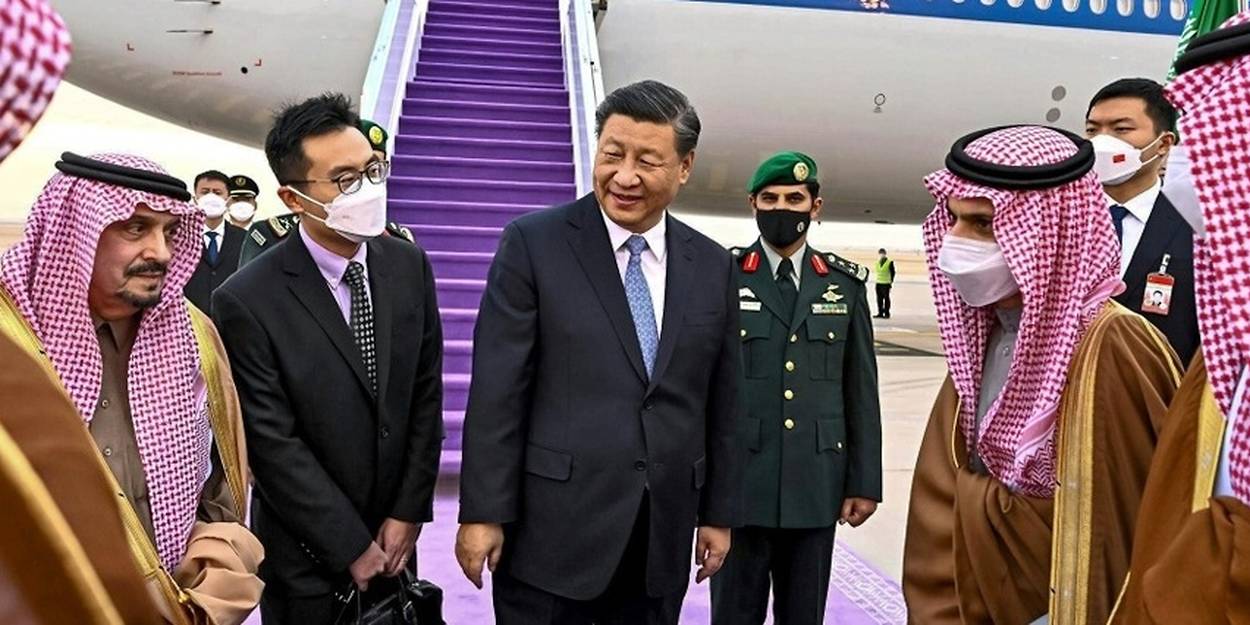 LChinese President Xi Jinping began a three-day visit to Saudi Arabia on Wednesday for meetings with leaders of the region dominated by energy issues, amid rivalries between Washington and Beijing in the battle for influence in the Middle East.

The leader of the world’s second largest economy landed in Riyadh, the capital of the oil-rich Gulf monarchy, where he was greeted by several Saudi officials, including Foreign Minister Fayal bin Farhane, according to state media images. of the Kingdom.

The Asian giant and the Gulf country, its main oil supplier, are seeking to strengthen their relations in a context of economic and geopolitical uncertainties.

The trip is Xi Jinping’s third overseas since the start of the Covid-19 pandemic in 2020 and his first to Saudi Arabia since 2016.

Bilateral meetings are planned, including with powerful Crown Prince Mohammed bin Salman, the kingdom’s de facto ruler, Saudi state media said. A summit will be held on Friday with the six countries of the Gulf Cooperation Council (GCC) and another with Arab leaders.

This is “the greatest diplomatic activity between China and the Arab world”, welcomed Wednesday the spokesman for the Chinese Minister of Foreign Affairs, Mao Ning.

This visit did not fail to provoke a reaction from the privileged strategic partner of the Gulf countries, the United States, of which China has become the great rival.

“We are aware of the influence that China wants to gain throughout the world”, including the Middle East, said Wednesday John Kirby, spokesman for the National Security Council attached to President Joe Biden.

He assured that the American administration was not asking “any country to choose between the United States and China”, while judging the Americans “well placed to dominate this strategic competition”.

The long relationship between Riyadh and Washington, often described as an “oil for security” agreement, has grown in recent years, particularly on the issue of human rights violations in the ultra-conservative kingdom.

The Saudi refusal to increase oil production to limit the surge in prices since the war in Ukraine has also angered Washington, which saw it as an “alignment with Russia”, another opponent of the Americans, even if Ryad rejected this accusation. .

Saudi Arabia has for its part criticized Washington for not having sufficiently supported it in the face of attacks by Houthi rebels from neighboring Yemen.

By showing their ability to “strengthen their ties” with Beijing, the Saudis, even if they cooperate with China on arms sales and production, could seek “to obtain more security guarantees from the United States”. , underlines Torbjorn Soltvedt, analyst the consulting company on the risks Verisk Maplecroft.

In Riyadh, it is above all energy that should dominate the discussions between the host country, the world’s largest exporter of crude oil, and China, the largest importer of black gold.

The two parties are making “significant progress” in their relations, said Saudi Energy Minister Abdelaziz bin Salman, quoted by the country’s official news agency, SPA. According to him, Saudi Arabia will remain a “credible and reliable partner” of China in the oil market.

These statements come at a time of crisis linked to the invasion of Ukraine by Russia. The G7 and the European Union established last Friday a ceiling on the price of Russian oil for export at 60 dollars a barrel, with the aim of depriving Moscow of the means to finance its war, creating new uncertainties on the world market.

Beyond energy, discussions could focus on the involvement of Chinese companies in mega-projects in Saudi Arabia, particularly in the field of surveillance technologies, widely used in China.

Saudi Arabia has attracted more than 20% of Chinese investment in the Arab world between 2002 and 2020, which is in fact the largest recipient in the region, according to the Saudi press agency SPA.

The Secretary General of the Gulf Cooperation Council, Nayef al-Hajraf, for his part, underlined the desire to “strengthen” relations with China, the leading trading partner in this region which is very rich in hydrocarbons and eager for investment.