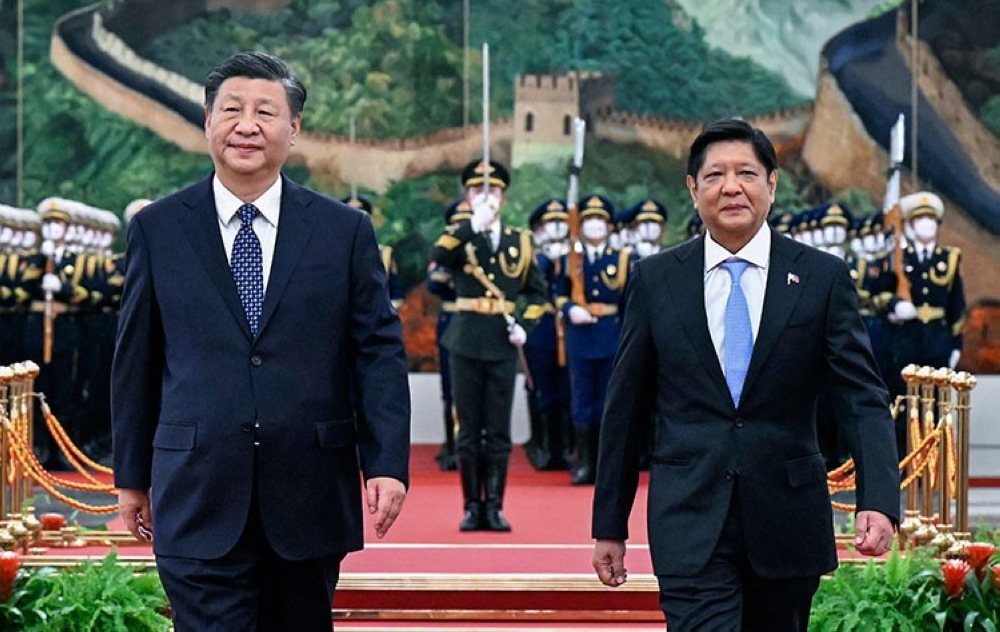 CHINA. In this photo released by Xinhua News Agency, visiting Philippine President Ferdinand Marcos Jr. (right) walks with Chinese President Xi Jinping after reviewing an honor guard during a welcoming ceremony at the Great Hall of the People in Beijing on January 4, 2023. (PA)

PRESIDENT Ferdinand Marcos Jr. said Monday, Jan. 22, 2023, that he had proposed to China that the two countries hold talks between their foreign ministers to quickly resolve any new disputes in the disputed South China Sea, and blamed Chinese actions for disagreements.

Marcos told Philippine TV stations in an interview that Chinese President Xi Jinping accepted his proposal during their talks in Beijing earlier this month and that the two sides are working out the details of such an arrangement.

There was no immediate reaction from Chinese officials.

China and the Philippines, along with Vietnam, Malaysia, Brunei and Taiwan, have been locked in an increasingly tense standoff over their overlapping claims to the busy and resource-rich waterway, which is considered a potential Asian flashpoint.

In 2017, Asian neighbors launched regular diplomatic talks called the Bilateral Consultation Mechanism to discuss incidents in disputed waters and prevent any escalation while discussing other aspects of their relationship.

Despite the talks, conflicts have persisted, including a recent incident reported by Filipino fishermen who accused the Chinese Coast Guard of kicking them out of the Philippine-occupied Second Thomas Shoal, which Beijing also claims, and then following their vessel as it left the disputed area. January 9. The incident happened days after Marcos visited China and met with Xi.

Marcos said he proposed to Xi during their meeting in Beijing that their top diplomats lead the bilateral consultation mechanism, which is currently handled by mid-level diplomats, to enable a faster response to future conflicts in the region. disputed sea.

My proposal is that we take this bilateral group to a higher level, Marcos said, adding that he would also ask the Philippine ambassador to China to be part of the higher level talks. I guarantee you that if there is a decision to be made, either of these gentlemen can pick up the phone and talk to me and within five minutes we will have a decision.

Marcos said Xi accepted his proposal and asked the Chinese foreign minister to discuss the new arrangement with Filipino officials.

I think if the president, President Xi, orders that we don’t do that anymore, we’ll do something else, so I think we will. I think the chain of command is pretty strong, Marcos said. We will be able to report any breach of the agreement that we reach.

It remains to be seen whether China will ease its increasingly aggressive actions in disputed waters and back down in any new conflict. Beijing has rejected and continues to defy a 2016 ruling by a UN-backed arbitration tribunal that invalidated its sweeping territorial claims on historical grounds in the South China Sea.

Marcos suggested that China must change its actions to prevent future conflicts. I think the necessary measures really come from the Chinese side because we don’t send Coast Guard boats into what we consider their waters or international waters. They stay in Philippine waters.

What they do is follow our fishing boats, he said. The Philippines, he added, will continue to exercise its right to file diplomatic protests against China despite its offer of high-level talks aimed at quickly resolving future disputes at sea. (AP)

No support for Swedish candidacy for NATO due to provocations