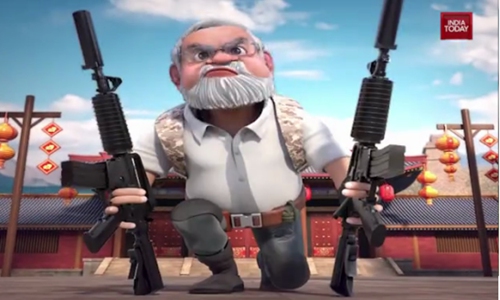 Photo: screenshot of the video

The video, which circulates widely on Chinese social media, has led to widespread condemnation and ridicule, with many Chinese netizens posting comments such as, “Modi slaughtering unarmed people, Indian media trying to advocate terrorism?” and “India is constrained by nationalism, what a pity.”

In the two-minute video, Modi parachutes from a plane and lands at a Chinese-style camp, then kills unarmed people representing Chinese apps, such as WeChat and TikTok, with two guns. After a big brawl with his opponent PUBG, avatar Modi wins and defiantly removes the app from his phone.

The video is titled “The Apps Hunter” and was uploaded by India Today on September 8th.

“Modi’s image is well represented in the video. Using the state apparatus to crack down on private companies shows the true colors of the Bharatiya Janata party by mobilizing populism. It meets public taste but also harms interests. public, ”Xie Chao, assistant professor of Indian studies at Tsinghua University, told the Global Times on Monday.

In early September, India announced that it would ban 118 other Chinese apps, saying they were “damaging” to the country’s sovereignty, integrity and defense. New Delhi has already banned 59 Chinese apps, including the popular TikTok and WeChat.

The crackdown on Chinese apps reduces work opportunities for Indians, and while it appears to protect India’s interests, the move actually sabotages its image, leading to political risks for businessmen and strangling its own opportunities in the service and manufacturing markets, Xie said.

Many Chinese netizens have expressed surprise that this type of short-sighted video is produced by an Indian media organization.

It is shocking to see the Prime Minister of one country being portrayed as a hero by killing innocent app operators from a neighboring country. It is the product of misguided and extreme nationalism, some observers have said.

“An armed Modi kills unarmed people. Why does the Indian media portray their prime minister as a terrorist?” some netizens commented on Sina Weibo. “India Today advocating such a violent and bloody video is an advertisement for terrorism,” other netizens said.

Eugenie Bouchard wins the tennis world with a stunning comeback