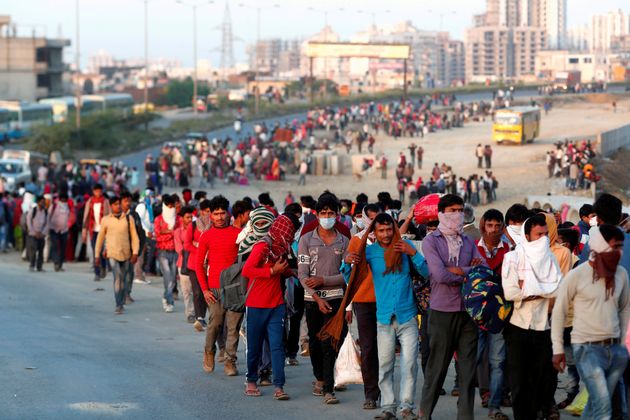 Migrant workers walk to a bus station along a highway with their families as they return to their villages, during a 21-day nationwide lockdown to limit the spread of the coronavirus disease (COVID-19), in Ghaziabad, on the outskirts of New Delhi, March 29, 2020.

A day after the central government led by Narendra Modi told parliament it had no record of the number of migrants who died or were injured during the nationwide lockdown, the Union’s Home Office said on Tuesday that the migration had been triggered by “fake news”. which caused the panic.

Opposition leaders and the Migrant Workers Solidarity Network on Monday criticized the government’s response to parliament which said it had no data on migrant worker deaths, and therefore the question of compensation “does not arise”.

“The migration of large numbers of migrant workers was sparked by panic created by false news regarding the length of the lockdown, and people, especially migrant workers, were concerned about an adequate supply of essential commodities. necessities like food, clean water, health services and shelter, ”he said. State Nityanand Rai said: The imprint cited.

Prime Minister Narendra Modi announced a 21-day nationwide lockdown on March 24, without warning. The lockdown had triggered a massive exodus of migrant workers to their home countries from different parts of the country due to lack of jobs, money and food.

On April 14, the government extended the lockdown until May 3.

On May 1, the lockdown was extended yet again until May 17. Shramik trains arranged by the government to transport stranded migrant workers to their countries of origin began to run that day.

On May 17, the government extended the lockdown until May 31.

On June 8, the first phase of reopening began after 75 days of lockdown.

On Monday, the written response from Union Minister of Labor Santosh Gangwar to Lok Sabha answered BJD member Bhartruhari Mahtab’s question on “the number of these workers killed / injured while migrating to their country of origin due to ‘such a lockdown, at the state / UT level’.

Mahtab had also asked whether the government had taken adequate steps to protect the social, economic, legal and health rights of migrant workers before implementing the lockdown in the country due to COVID-19.

The minister’s response said the government did not have data on the number of migrants who died or were injured while migrating to their places of origin due to the lockdown.

However, the ministry admitted that more than a crore of migrants had returned to their countries of origin from various corners of the country.

The ministry also said no data was being kept on job loss among migrant workers due to the Covid-19 crisis.

Gangwar said the central government has taken many steps to provide them with financial aid, food packages and other benefits.

Gandhi was among several opposition leaders who condemned the government’s response.

The Total Hardness Center doesn’t care about the migrant worker deaths they caused by pushing them into trains, makeshift carts and on foot to distant homes. Acknowledge at least provisional and incomplete data on Sharmik trains and road accidents #migrantslivesmatter

It is shameful and irresponsible.
The brutal, unforeseen and unprepared lockdown by PM Modi has forced thousands of migrant workers to travel thousands of kilometers. He now says he has no data on the number of deaths upon returning home; and those who lost their jobs
during locking.https://t.co/NlfKx3YvTm

The Migrant Workers Solidarity Network said the government’s response was not surprising since “475 out of 536 deputies are crorepatis.”

The center says there is no data available on the deaths of migrant workers during lockdown.

On the same day, 11 lakh pages of data were produced to mentor an activist under UAPA.

The two have several media reports that refute their claims.

The priorities are clear.

Researchers Thejesh GN, Kanika Sharma, Krushna and Aman, with assistance from Roadscholarz, a group of independent researchers and student volunteers, created and maintained a database of Indians who died as a result of confinement.

As of July 4, their database contained recorded 971 deaths due to starvation and financial distress, exhaustion, accidents during migration, lack or denial of medical care, suicides, police brutality, crime and alcohol withdrawal.

Aman, who is an assistant professor of legal practice at the Jindal Global School of Law tweeted on Tuesday that one of the reasons they started tracking the deaths was “the active denial of the crisis caused by the unplanned lockdown.”

1. Retweet our last update: One of the main reasons some of us started this exercise to track down deaths associated with the lockdown (and not just migrant worker deaths) was that the government would be doing its part. better to remove these figs from public institutions & souvenirs. https://t.co/1TdX1f1Exy

3. Exactly, as we expected – yesterday with the response from Mr Gangwar (Minister of State for Labor and Employment) – the government admitted that it had no records. https://t.co/hGjlqxmKTK. Maybe the best way to deny it tomorrow!

Today, the government in parliament said it did not have data on how many people have died due to the lockdown, although many have compiled the data from their homes.https://t.co/DTzjmo3Rqh

No baseline data and they want to use AI and build smart cities?
Lol. https://t.co/kJml9UKzNH

The Ministry of Labor said it had no record of migrant worker deaths. Here is our ground report on Ranveer Singh who died on his way home from Agra in Madhya Pradesh. https://t.co/DdonbLodaH

In May, I reported on Nikhil and Chandni, children orphaned when their parents died in an accident while cycling 700 km between Lko and Chattisgarh. The government may have no records, but these are faces of anguish that millions of people have been locked out of. happy to report that they are doing well! pic.twitter.com/8C2jhunvuG

In his response to the question, the minister referred to “the central government, state governments, local bodies, self-help groups, residents’ protection associations, health professionals, sanitation workers. as well as a large number of genuine and bona fide non-governmental organizations “that have battled the unprecedented human crisis” due to the COVID-19 outbreak and nationwide lockdown. “

The virus may have infected nearly one-fifth of Africans S.