Liputan6.com, Jakarta- Hoax information can attack anyone, officials are often the target of fake news in various forms, such as photos, videos and writings.

Fact Check Liputan6.com has tracked a number of information circulating during the week, including information on officials in this country, from President Joko Widodo (Jokowi) to his ministers.

The following is a hoax on President Jokowi and his ministers as a result of Liputan6.com’s fact-checking:

1. The Minister of Maritime Affairs and Investments, Luhut Binsar Pandjaitan, will escape to China

Circulating on social networks and chat applications on the Minister for the Coordination of Maritime Affairs and Investment, Luhut Binsar Pandjaitan (LBP) will flee to China.

The download comes in the form of the following story:

“BREAKING NEWS * Valid information from people within the palace: LBP is ready to flee abroad, possibly to China # requested to block all airport gates and ports GWA info”

In addition, he added the sentence:“Is it true ,,,”

Liputan6.com fact check tracing results, news that LBP will flee to China is not true. The point is, LBP along with Vice President Ma’ruf Amin and Health Minister (Menkes) Terawan Agus Putranto and PT Bio Farma Managing Chairman Honesti Basyir will be traveling to China to review the covid-19 vaccine.

2. Photo of Jokowi taking care of the ducks 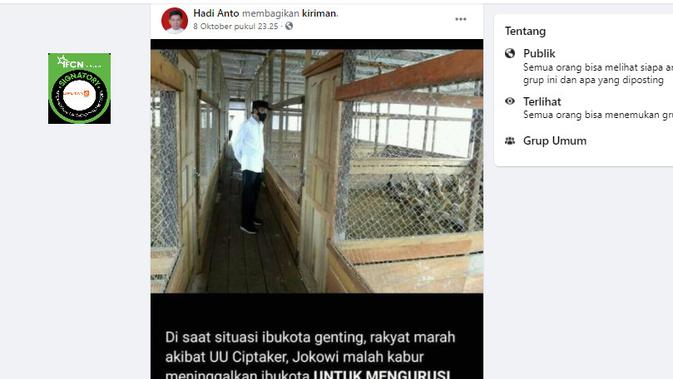 A photo claiming that Jokowo was tending to the ducks was uploaded to Hadi Anto’s Facebook account on October 8, 2020.

The uploaded photo shows Jokowi standing looking at a number of uploads in the cage.

The photo has the following captions:

“When the situation in the capital is precarious, people are angry about the Ciptaker law, Jokowi has instead fled the capital TO TAKE CARE OF DUCKS in Central Kalimantan!”

Liputan6.com Fact Check research results claim that the photo of Jokowi taking care of the ducks is not true.

The point is, Jokowi in the photo is looking at a food estate project in Belanti Siam village in central Kalimantan. 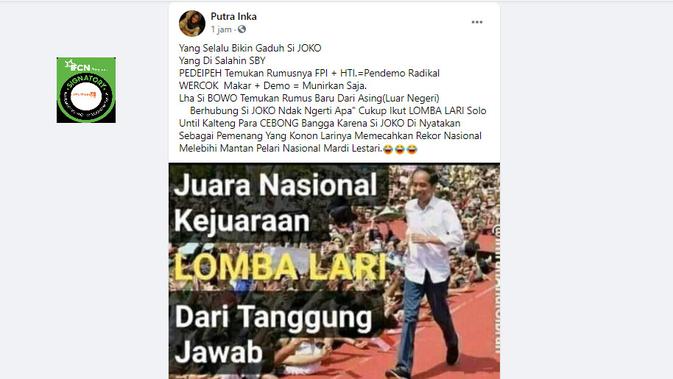 The photo shows Jokowo in a white shirt running across a stage with a number of people standing under.

The photo is tagged as follows:

“What always makes the JOKO who blames SBY

Until Central Kalimantan CEBONGs are proud because JOKO has been declared

As a winner who would have broken the national record 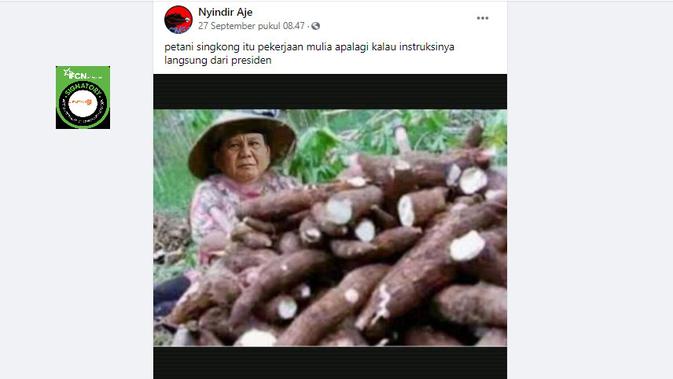 The uploaded photo shows Prabowo wearing a hat behind a pile of cassava.

The photo is tagged as follows:

“Cassava farmers are a noble job, especially if the instructions come directly from the president”

Liputan6.com Fact Check research results, the claim that Prabowo’s photo is a cassava farmer is not true.

The photo has been edited, the real figure in the photo is not Prabowo.

5. Minister of Health Terawan resigns because of Najwa Shihab

The request of Minister of Health Terawan resigned because Najwa was uploaded by Noufal’s Facebook account on October 2, 2020.

The download took the form of a link to an article titled “Because of Najwa, finally, the Minister of Health, Terawan, has also withdrawn” which was published on the site scammer.tekape.id.

“Scammer.Tekape.id_ Social media activist Denny Siregar once again made a controversial and flirtatious statement. Not without reason, he wrote it on his Facebook account.

Finally tonight, after being blasphemed here and there, the Minister of Health Terawan also resigned. Thank you, Ms. Najwa Shihab, he said, quoted in Jakarta on Thursday (01/10/2020).

In his post, he posted a link to the Cokro TV channel which examined who, what and how Health Minister Terawan participated in the world of medicine and how his strategy was to deal with the pandemic of Covid-19.

Not only that, he tied the post. In fact, at the end of the video, he appeared to be interviewing Najwa Shihab on an empty chair. As a result, Denny’s checkmate against Najwa. Internet users’ reactions also varied in welcoming Denny Siregar’s download.

President Joko Widodo (Jokowi) examining the manipulation model implemented by Minister of Health Terawan. At the end of his explanation, he features a funny scene where Terawan resigns after being bullied and is cornered by presenter Najwa Shihab by posting a video scene just before Dr Terawan’s inauguration as Minister of Health. . The funny thing is that the video was viewed upside down, so the Minister of Health appeared to back down.

In fact, at the end of the video, he appeared to be interviewing Najwa Shihab on an empty chair. As a result, Denny’s checkmate against Najwa. Internet users’ reactions also varied in welcoming Denny Siregar’s download.

Is it only Najwa who can question the vacant seats? DS can too, my love. Super DS, said one internet user.

The retrograde video of Terawan mentioned in the scammer.tekape.id article circulated earlier, ahead of Najwa Shibab’s video of an interview on an empty chair in Najwa’s eyes waiting for Terawan.

In the video in the form of documentation, when Minister Terawan came and left Merdeka Palace on Tuesday, October 22, 2019. At that time, Terawan was summoned about his willingness to join the forward cabinet of the Indonesia as Minister of Health.