Katsuji Nakazawa is a Tokyo-based senior writer and columnist at Nikkei. He spent seven years in China as a correspondent and later as the Chinese bureau chief. He is the 2014 recipient of the Vaughn-Ueda International Journalist’s Award for International Reporting.

TOKYO – Twenty-one years after his death, Japanese master painter Kaii Higashiyama must have turned in his grave earlier this month when the Chinese government used one of his paintings to send a stern warning to the man the richest in the country.

On the evening of November 2, moments after Jack Ma Yun, the founder of Chinese e-commerce giant Alibaba Group, was summoned by Chinese authorities for questioning, a cryptic column was posted on Xinhua’s official WeChat account.

The article – titled “Don’t Talk Without Thinking, Don’t Do What You Want, People Cannot Act of Their Own Will” – made no mention of Ma. But it was accompanied by a striking blue paint of Higashiyama which shows a white cloud in the sky in the shape of a horse.

In Chinese, “Ma” means horse, “Yun” means cloud. It was clear who the article was talking to.

Some of the sentences were bold for emphasis. The last one went like this:

“There is a price behind everything. If you don’t have capital, don’t do what you want.” 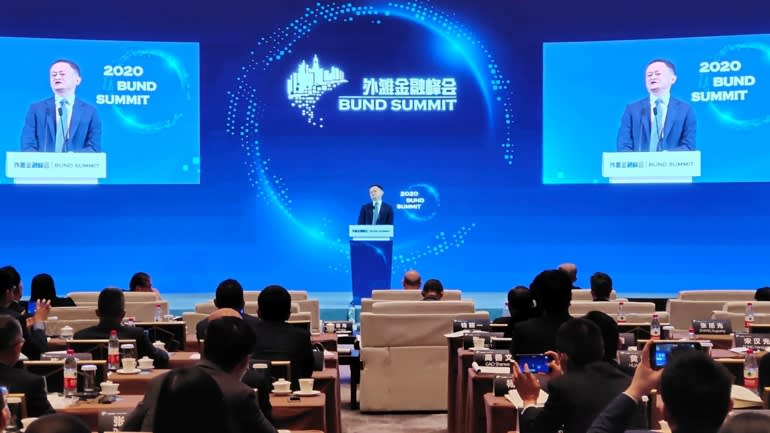 Jack Ma was particularly bold in his speech at the Bund summit in Shanghai, where he criticized Chinese regulators, the country’s financial system and Chinese banks. © AP

The 1972 painting is titled “Fleecy Clouds”.

Speculation quickly spread that the column, which suggests the horse could be blown away like a cloud, should have been released with the blessing of China’s top leaders.

As a member of the ruling Chinese Communist Party, Ma is required to show absolute loyalty to the system.

But the 56-year-old entrepreneur made remarks deemed to challenge the intentions of the party’s central committee, headed by President Xi Jinping.

Speaking at a financial conference in Shanghai on October 24, the billionaire said slammed Chinese regulators, saying the country’s old financial regulations were holding back technological innovation.

“China does not have a problem with systemic financial risk,” Ma said at the Bund summit. “Chinese finance is fundamentally risk free; the risk arises rather from the absence of a system.

“A good innovation is not afraid of regulations, but afraid of outdated regulations. We should not use the way of running a station to regulate an airport.”

Ma has also targeted Chinese banks, claiming they operate with a “pawnshop” mentality.

Ma was particularly bold as he spoke in front of Wang Qishan, the vice president who for years was at the center of China’s financial administration.

Ma’s criticism was also directed at Vice Premier Liu He, an aide to Xi who oversees China’s macroeconomic policy. His words, of course, were carried over to the upper echelons. Vice Premier Liu He, left, and Vice President Wang Qishan. Jack Ma partially addressed his criticism of Liu while speaking to Wang, who has been at the center of China’s financial administration for years. © AFP / Jiji

Ma pioneered e-commerce and cashless commerce. But his remarks were reckless and he ended up stepping on the tiger’s tail.

The day after Xinhua used Higashiyama’s painting to make a point, the planned initial public offering of Alibaba’s financial arm, Ant Group, in Shanghai and Hong Kong was suspended.

The last minute delay in what was to be the biggest fundraiser in history was the result of the Xi regime prioritizing domestic issues over the international credibility of the Chinese market.

Ant Group is unparalleled in scale. Over a billion people use Alipay, its main smartphone payment service. It also offers a range of other services including loans, cash advances and credit scores.

For her part, Ma has stayed away from politics. Unlike the founders of Tencent, Baidu, and other tech giants, he is not a member of China’s “two sessions,” the annual gathering of the national legislature and the main political advisory body. Pony Ma, CEO of Tencent, and Jack Ma, Executive Chairman of Alibaba, attend an event at the Great Hall of the People in Beijing in 2018. © Reuters

That said, the rapid growth of its business empire has to some extent been protected by its political connections. Ma has a relatively close relationship with former Chairman Jiang Zemin, who led the so-called Shanghai faction, his right-hand man, former Vice Chairman Zeng Qinghong, and the people around them.

Alibaba is a private company born in Zhejiang province, a stone’s throw from Shanghai.

The key to understanding Ma’s current stumble, however, may lie in her relationship with Xi.

Xi spent many years in Zhejiang as a civil servant, gradually consolidating his political base.

Xi’s subordinates from that time on have held key positions across the country once their boss took power and are called the “Zhejiang faction.”

But Ma is not known to be close to them. Perhaps for two reasons. He knew the risks of getting too close to politics. He was also confident in his abilities and didn’t feel the need to.

“Money and political power cannot coexist,” Ma once said. “One is the powder keg, while the other is the match. If they both exist, an explosion occurs. will produce. “

Always a merchant, Ma always had a good intuition about how the tides changed.

At a relatively young age, he decided to retire from day-to-day management. Whenever he thought he was getting too visible, Ma would withdraw.

But each time, the spotlight shone brighter and it couldn’t disappear.

In May 2013, two months after Xi assumed the post of chairman, Ma officially retired as CEO of Alibaba to devote himself to his post as chairman of the company.

In March 2018, Xi pushed for a review of the national constitution, removing the two five-year term limit for Chinese presidents and paving the way for his own extended rule.

Xi’s power play prompted Ma to rush a decision. Six months later, Ma declared that he “will retire in a year”. Ma actually resigned as chairman in September 2019. He also retired from the board in September.

But this time, Ma seems to have failed to keep a proper distance from Chinese politics. President Xi Jinping visits Jiangsu, the hometown of former President Jiang, for the first time since he became China’s main leader in 2012, drawing attention to his political triumph over Jiang and others party elders. © Xinhua / Kyodo

A clue to Xi’s thinking was seen last week during an inspection tour of Jiangsu Province.

While visiting the Nantong Museum, the president visited exhibits showcasing Zhang Jian, the museum’s founder and Chinese industrialist and educator in the late 19th and early 20th centuries.

The museum showed how Zhang ran businesses that benefited the nation, developed education, and participated in public welfare activities.

Hailing Zhang as “a model of all Chinese private entrepreneurs,” Xi said the museum and Zhang’s former residence should be transformed into a patriotic education base, “which can strengthen the sense of responsibility. social entrepreneurship, “Xinhua reported. .

Just ten days after the authorities interrogated Ma, the Chinese president urged private entrepreneurs not to be selfish.

Another notable point about Xi Jiangsu’s tour is that he visited Yangzhou, the hometown of former President Jiang, for the first time since he became the main Chinese leader in 2012.

Six years ago, Xi caused a stir while inspecting Zhenjiang, an ancient city south of Yangzhou and just across the Yangtze River.

The name of Zhenjiang could have disturbing political connotations. Zhen means calm, Jiang means river. It could be read as “bring Jiang back under control”. This is why even the name of a bridge over the Yangtze River completed in 2005 to connect Zhenjiang and Yangzhou has avoided using that name.

Six years ago, China was still reeling from the political storm that raged over Xi’s anti-corruption campaign, seeing Zhou Yongkang, a former Politburo Standing Committee member, under investigation for corruption. .

The committee is the main decision-making body of the party. Jiangsu was the power base of Zhou as well as former President Jiang. Xi’s visit to Zhenjiang six years ago reflected his determination to break the reign of party elders with his crackdown on corruption.

As of the end of last month, there were no personnel changes involving the promotion of potential Xi successors at the fifth plenary session of the 19th Party Central Committee, paving the way for Xi to extend his rule.

The visit to the politically sensitive Yangzhou almost felt like a victory lap, commemorating Xi’s triumph in his power struggle with Jiang and other party elders.

Refly: If Anies is convicted, Jokowi could also be subjected to it