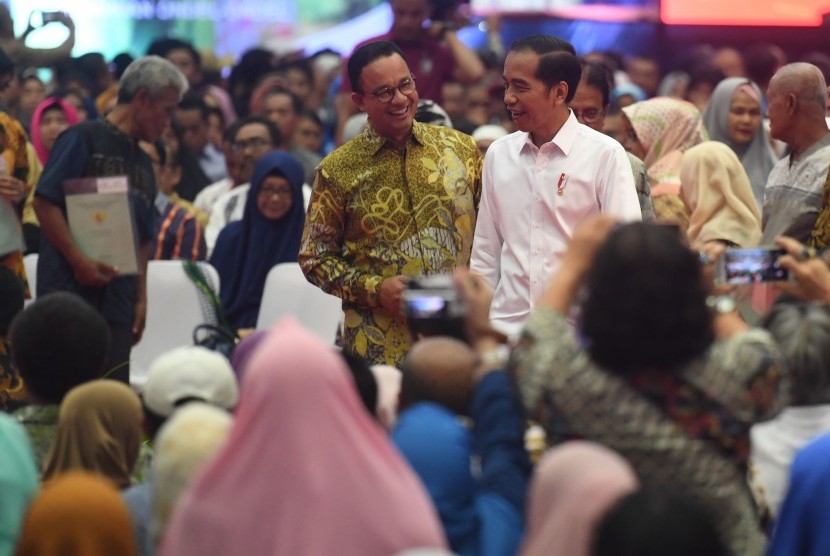 Refly felt that efforts to criminalize Anies with the health quarantine law were forced.

REPUBLIKA.CO.ID, JAKARTA – Constitutional law expert Refly Harun slammed police for citing the possibility of a crime against DKI Jakarta Governor Anies Baswedan for alleged violations of the health quarantine law . This is considered inappropriate and if implemented, the President of the Republic of Indonesia, Joko Widodo (Jokowi) can also be sentenced.

“If every criminal offense is borne by state officials because there are citizens who have raped the crime, then in fact the president could in fact be the subject of criminal acts later,” said Refly cited by Antara. Republika.co.id from his Youtube account, Wednesday (11/18).

As we know, the day after the wedding ceremony of the child of the FPI leader Habib Rizieq Shihab (HRS) who was often visited, Anies was threatened with an alleged criminal act under Article 93 of the Law of Republic of Indonesia issue 6 of 2018 regarding sanitary quarantine.

For the record, section 93 itself reads as follows:Anyone who does not comply with the implementation of the health quarantine referred to in Article 9 paragraph (1) and / or obstructs the implementation of the health quarantine in such a way as to cause a public health emergency will be ordered to imprisonment for up to 1 (one) year and / or a maximum fine of Rp. 100,000,000.00 (one hundred million rupees)“.

Refly, who is also an activist with the Coalition for Action to Save Indonesia (WE), said the criminal attempt was strange and did not meet the provisions of the article. This article, Refly explained, contained a cause and an effect, namely “causing a public health emergency”. In fact, to determine a public health emergency itself has its own legal instrument.

Refy continued, if he was targeting Anies what could be used was political or administrative sanctions, as what was done related to how Anies exercised his authority as governor. Political sanctions can be applied through the DKI Jakarta DPRD, which can exercise its rights by harassing Anies.

During this time, administrative sanctions may be imposed by the central government. Even then, Refly said, it was not possible to revoke them, but rather other administrative penalties such as the reduction of certain fund allocations.

“It’s a bit of a stretch if you target Jakarta Governor Anies Baswedan with a crime. So it’s a question related to the mandate, to how Anies Baswedan runs the government in DKI Jakarta,” Refly said.

If the logic used by the police is used, Jokowi is considered doomed. Refly gave an example of how Jokowi could be convicted of weakening the KPK by his latest law.

“can can be interpreted as blocking the eradication of corrupt criminal acts, for example, or abuse of authority, for example. can can’t be that prospect, ”he said.

Refly was also more in agreement if Anies applied administrative rules as permitted by statutory regulations of the central or national government. He hopes that the government and democratically elected regional leaders can be sidelined by mechanisms outside of democracy itself.

Former Chief Justice of the Constitutional Court (MK) Hamdan Zoelva also spoke on the matter. He said police had bad articles if Large Scale Social Restrictions (PSBB) violators were subjected to or threatened with the application of Section 93 of the Quarantine Act, as uploaded to the Twitter account @ hamdanzoelva Wednesday (18/11).

Hamdan said the PSBB was different from quarantine. As for those who can be punished according to article 93 of the Quarantine Law, are only quarantine violations.

As is known, DKI Jakarta region has transitional PSBB status until November 22, 2020. Hamdan said that criminal acts for PSBB violations are not regulated by the Quarantine Law. These violations are only regulated in a Pergub.

“In Indonesia there is no quarantine provision except the PSBB stipulation. It is a bad article if a violation of the PSBB is threatened by article 93 of the Quarantine Law,” he said. Hamdan Zoelva tweeted.

However, on Wednesday 11/18, Hamdan corrected his tweet by calling the PSBB a health quarantine.

Police asked Anies Baswedan on Tuesday (November 17th) for clarification regarding the crowd at the HRS daughter’s wedding ceremony some time ago. Although he was only invited for clarification purposes, police said investigators could identify Anies as a suspect in connection with a criminal offense against health protocol violations.

According to Karo Penmas, the public relations division of the National Police, Brigadier General Awi Setiyono, the investigative team only needs two pieces of solid evidence to determine a person as a suspect. No exception to Anies who was interviewed by Polda Metro Jaya.

“If there is sufficient evidence, anyone involved in a criminal incident should be held accountable under the law,” Awi said during his press conference at police headquarters in south Jakarta on Wednesday (18 / 11).

Anies was asked for a nine-hour interrogation at Ditreskrimum Polda Metro Jaya, south of Jakarta on Tuesday, November 17. Few words were said by Anies after completing the exam.

“Alhamdulillah, I finished responding to the invitation to provide clarification and the process went smoothly. Then 33 questions were submitted to a 23-page report,” Anies explained.

The refusal to concede concerns the political power of Donald Trump with the base: Carly Fiorina

US pushes for delisting of Chinese companies