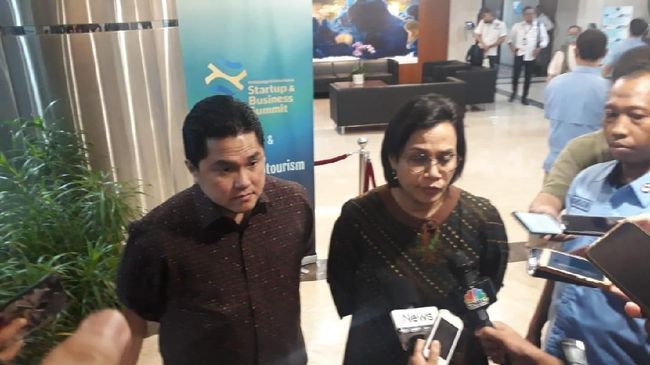 Jakarta, CNBC Indonesia – The Indonesian Sovereign Fund (SWF) or the Investment Management Institution (LPI) is ready to operate in early 2021. The government is starting to prepare for the appointment of professionals who will be involved in the management of the endowment fund.

The Director General of State Assets of the Ministry of Finance, Isa Rachmatarwata, said that as stated in Law No. 11 of 2020 regarding job creation, SWF will consist of a supervisory board and a board of directors.

The supervisory board will consist of five people, and it has been confirmed that the two current cabinet ministers, namely Finance Minister Sri Mulyani Indrawati and BUMN Minister Erick Thohir will simultaneously become the Supervisory Board as members of the SWF.

“The supervisory board is made up of five people, two of whom are definitively ex officio, namely the president who is simultaneously a member is the Minister of Finance and another member is the Minister of BUMN. So if you are asked, y Does he already have two people, of course, they are members of the supervisory board, “Isa explained in a video conference on Friday (11/20/2020).

During this time, the other three supervisory boards will be independent professionals, representing the strategic partners of the SWF. This will then be proposed by President Joko Widodo (Jokowi), and consulted with the House of Representatives (DPR).

The selection process, Isa said, will begin after the enactment of the government regulations (PP) regarding the SWF. Currently, stakeholders have harmonized the rules and in the near future this will be passed on to Jokowi.

“Now we have completed the ministerial committee meeting process. There is a harmonization process and maybe these days it can be submitted to the president (Jokowi), but I have not checked again to this day, ”explained Isa.

After the selection of the Supervisory Board, from there, the Board of Directors will be elected again. It will also come from independent professionals. Nonetheless, Isa said, this does not rule out the possibility that officials could also become directors of SWF.

“If the supervisory board is complete, then it will elect the board of directors. The board is made up of five people and it is professional. So if Mr. Meirizal Nur (director of state property separated by Ministry of Finance) is elected, Mr. Mei means he is already professional in this field. There are also professionals. So yes, we hope that early next year this LPI can start to operate “, did he declare.

As is known, the SWF was established through the Job Creation Law and supported by the PP which regulates that central government investments can be made by the Minister of Finance as treasurer general of the State and institutions that receive special authority (sui generis) in the context of investment management.

Thus, the goal of establishing LPI is to gain the trust of global investors. In addition, the objective of government investment through this legal umbrella is to achieve economic benefits, social benefits and to contribute to national economic development.

Isa also explained that it is possible that at the beginning of its creation, the SWF will receive financial support from the APBN in the amount of Rs 15 trillion. Since the initial capital cannot simply settle, the government will manage it through portfolio investments.

“At the start of the establishment, the government received 15 trillion rupees. Then it has not yet decided which project to invest in, this money also cannot be idle. That is why it will make a small investment management portfolio, ”said Isa.

Earlier, the Minister of Finance, Sri Mulyani Indrawati, explained that the initial capital for the formation of the SWF would reach 75 trillion rupees. Initial capital will come from a combination of public assets, assets of state-owned enterprises (BUMNs) and other sources.

Regarding the additional rules on the operation and formation of sovereign wealth funds, Sri Mulyani will be further regulated in the government regulation (PP).

“In the PP, we will regulate this IPL with the equity participation specified in the PP which consists of cash equity, BUMN shares, the value of which we hope will reach IDR 75 trillion,” Sri Mulyani explained during the presentation. a press conference on Wednesday. (7/10/2020).

In the early stages, Sri Mulyani said, it is possible that the formation of capital will be in the form of cash worth Rs 30 trillion. In this initial phase of capital, it will come from state-owned property (BMN), shares in BUMN companies and government debt.

“Now it has been discussed the injection of equity capital in the form of cash, the value of which reaches up to Rp 30 trillion,” he said.

With equity of up to Rp 75 trillion, the government hopes to triple investment funds or reach Rp 225 trillion.

China will refrain from decoupling with the West, says Xi Jinping