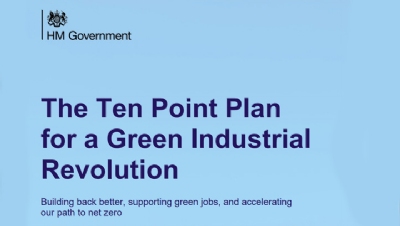 Businesses, green groups and entire sectors have hailed the UK government’s sweeping announcement to release a ten-point plan that would put the country on the path to net zero, but analysis already suggests more is needed to achieve net zero emissions. by 2050.

Government insists this is ‘just the start’ of green policy deployment

It was arguably the biggest green announcement of the year, eclipsing that of the green jobs package released by the government this summer and the postponement of the COP26 climate summit.

Boris Johnson’s ten-point plan aims to eradicate the UK’s contribution to climate change by 2050, which has been enshrined in law as part of the net-zero emissions target. Clean hydrogen, carbon capture and storage (CCS), zero carbon transport and offshore wind are all key pillars of the new pledge package.

The £ 12 billion plan will support up to 250,000 green jobs, with the government aiming to get three times as much private sector investment by 2030. A key aspect of the plan is to ‘level’ all the regions of the country, with the North East centers, Yorkshire and the Humber, the West Midlands, Scotland and Wales, all focal points for the strategy.

Initial reaction to the plan has been optimistic, with green groups describing the announcement as an “ambitious plan for a green industrial revolution”. As always with government, however, the devil is in the details.

A new 38-page document has been released by the government, giving more details of the ten-point plan. Despite a closer look at the low-carbon transition, the paper somehow manages to raise more questions.

By the government’s own admission, the ten-point plan would reduce emissions by 180 million tonnes between 2023 and 2032, which “is equivalent to taking all today’s cars off the road for about two years” .

It’s a promising start. however, Carbon Brief’s analysis suggests this translates into around 50% of the emissions reductions needed to meet the fourth and fifth carbon budgets. which cover these periods. These existing carbon budgets are tracked against the old climate change law of an 80% reduction in emissions, rather than the net zero target, and should be updated. In fact, the Climate Change Committee (CCC) is expected to publish opinions on future carbon budgets in December.

According to the government, the ten-point plan would give the following boost to green jobs, emission reductions and investment levels:

Advance nuclear would support a peak of around 10,000 jobs during construction and could attract up to £ 300million for the development of small modular reactors alone. There are now decarbonization figures for nuclear power, but the government adds that “each GW of nuclear power production is enough to supply two million homes with clean electricity.”

Decarbonize public transport would support up to 3,000 jobs by 2025, with government investment reaching £ 5bn in buses, biking and walking in Parliament. This would save around 2MtCO2e on green buses, cycling and walking between 2023 and 2032.

Aviation and Shipping would support up to 5,200 jobs to ‘sustain’ the aerospace industry, which is worth £ 12 billion to the economy. This would save up to 1MtCO2e by 2032 thanks to a clean sea and nearly 15MtCO2e by 2050 for aviation.

Nature would allow 20,000 jobs to improve flood defenses by 2027, attracting £ 5.2 billion in investment. No figures shown for carbon reductions or savings.

Green finance has the ‘potential’ of hundreds of thousands of jobs by 2030, attracting £ 1bn of government funding in net zero innovation with £ 1bn of matching funding and potentially £ 2.5bn sterling of complementary private sector funding.

The government is adamant that the ten point plan is not the end point of the green policy aimed at the net-zero transition.

“This is just the start,” the report says. “Over the next year, we will work with industry to design further sector plans and meet our carbon budgets and our goal of net zero by 2050. To advance our progress towards this national priority, Premier Minister will set up a new Net Zero working group, placing a systemic approach at the heart of our thinking.

Green groups and companies are still awaiting the spending review, the white paper on energy, the national infrastructure strategy, the heat and buildings strategy and a committed hydrogen strategy – all of which could emerge imminently or in 2021.

It is likely that these strategies, combined with updated carbon budgets and a new Nationally Determined Contribution (NDC) aligned with net zero to the Paris Agreement in the run-up to COP26, could transform the sectoral approaches of the decarbonization and put the UK on track to net-zero by 2050.

On this day in 2009, legendary cricketer Sachin Tendulkar wrote this record | Cricket News