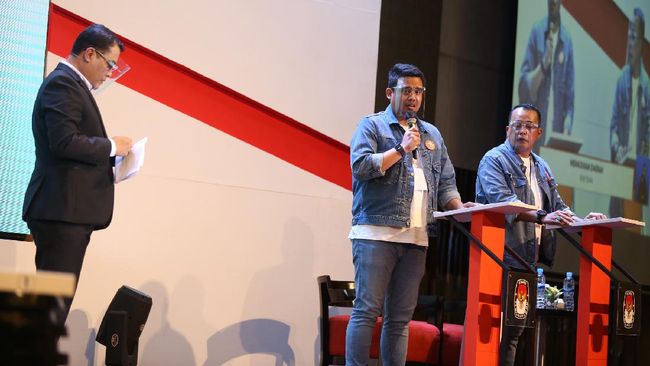 Beau-president Joko Widodo, Bobby Nasution, strongly criticized a number of issues in the city of Medan, from potholes to corruption cases. Bobby has been making this review since the start of the second round of debates Medan Pilkadawhich took place at the Mercure Medan hotel, Saturday (21/11) evening.

“The main task of government is to ensure that services to the public can be good, accurate and fast. We can say that the services in Medan are bad. This is exacerbated by the Corruption Perception Index of 12 major cities in Indonesia, Medan being the lowest city. This causes endless flooding. There are potholes everywhere, the corruption is never over, ”said Bobby.

“How is it in the Medan Baru sub-district that there have been victims of death and suicide? Because he did not receive social assistance during the Covid pandemic. What Udak Akhyar as acting mayor of Medan who is also chairman of the Medan task force did? “he said.

Medan serial number 01 mayoral candidate Akhyar Nasution, who received a question from his rival, immediately responded aloud. Akhyar admitted that the suicide case was not caused by the victim not receiving assistance during the Covid pandemic.

“Regarding those who committed suicide in Padang Bulan, I was there, I checked that it was a family affair. My property was in the field, I didn’t hear the news, but I was directly in the field. This is my answer, so it’s not what people say, but I’m going straight to I’m responsible for this problem, ”he said.

Then Bobby Nasution said there was no transparency in Medan City. Bobby said Medan City received a budget of IDR 30 trillion. There should be progress every year since the development in Medan.

“So there are four budget years left. In total, it is only 18 trillion rupees. So ladies and gentlemen, the city of Medan has budget transparency. All that remains is to open the website. of Pemko Medan. So all incorrect data must be corrected. We, the leaders of Medan, must be able to convey information. correct data, do not rely on assumptions and estimates, “Akhyar said with emotion. .

Akhyar again became moved at the question. He said the salaries of paramedics had been delayed because BPJS Kesehatan was convoluted in paying claims from all of Medan’s hospitals. Afterwards, Akhyar also seemed moved when Bobby Nasution and Aulia Rachman questioned the salaries of paramedics at Dr Pirngadi Medan hospital which was still on standby and medics at home. the pain is gone. According to Aulia, this condition has a negative impact on Pemko Medan’s income.

“It is true that the fees have been delayed. Because
Payment of fees has long been delayed. Pirngadi’s income is BPJS. We ask BPJS not to get involved in settling all hospital claims. We ask this public service agency in Medan to be well served by BPJS, ”he explained.