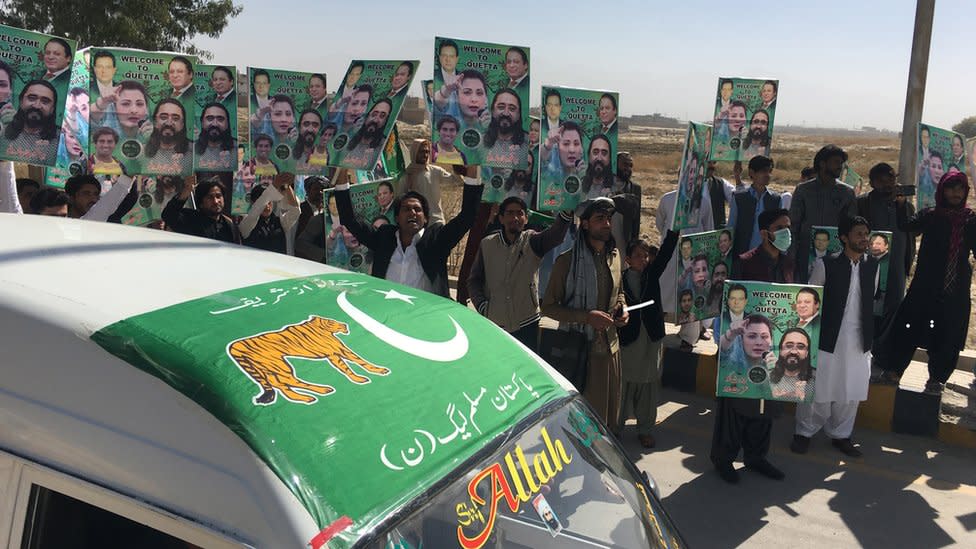 Opposition parties in Pakistan are keeping pressure on Imran Khan, staging a series of mass protests against his government.

They allege the prime minister came to power in a 2018 rigged election backed by the military.

Thousands of protesters are scheduled to demonstrate in the city of Peshawar on Sunday, despite the government’s threat to ban gatherings to curb the rise in coronavirus cases.

The prime minister, who came to power on an anti-corruption platform, said the campaign was aimed at blackmailing him into dropping corruption cases against opposition leaders.

The powerful Pakistani army denies interfering in politics and Mr Khan dismisses claims that it helped him win.

The next general election is not scheduled before 2023.

Who is behind the rallies?

The Pakistani Democratic Movement (PDM) has staged a series of mass protests since October 16.

Its members range from a right-wing religious group to traditional centrist and left-center parties as well as secular nationalists.

Huge rallies took place in three of the country’s four provinces – Punjab, Sindh and Balochistan. Sunday is the first that the PDM has organized in Khyber Pakhtunkhwa province.

Opposition parties say they want to overthrow the “unrepresentative” government, which they also accuse of putting pressure on the judiciary and mismanaging the economy.

The PDM is the latest alliance that aims to restore “real” democracy in the perpetual civil-military conflict in Pakistan.

But this time, one of the highlights is the return of former Prime Minister Nawaz Sharif to public policy.

And he did it with a difference.

His direct hits against the two senior military officials – the army chief, General Qamar Javed Bajwa and the head of the main military intelligence agency, the ISI, Lieutenant General Faiz Hameed – are unprecedented in the 73 years of the country’s history.

He says they are responsible for Pakistan’s political and economic woes.

What do rallies tell us?

The rallies held so far in Gujranwala, Karachi and Quetta have proceeded despite obstacles such as roadblocks and even arrests by the authorities.

In one such incident, Nawaz Sharif’s son-in-law Safdar Awan was arrested in his hotel room early in the morning after the Karachi rally on October 19.

The move embarrassed both the government and the military after footage of the raid came out, showing security personnel breaking into Mr. Awan’s bedroom as he slept with his wife.

Soon it emerged that hours before the raid, the police chief of Sindh, of which Karachi is the capital, had been taken from his residence to the offices of an intelligence service and “forced” to sign the orders. arrest of Mr. Awan.

Subsequently, all Sindh police officers requested “protest leave”, which they postponed when the army chief announced an internal investigation into the alleged kidnapping of the police chief. .

But although the army chief has ordered the withdrawal of some ISI and army officials, no visible action has yet been taken against them.

Authorities also pressured the media to censor some of the speeches at the rallies.

These leaders blasted the army, accusing it of enforced disappearances, human rights violations and controlling the Khan government from behind the scenes.

Is it true that the election was rigged?

Imran Khan and his team claim people voted for them because they were fed up with the “massive corruption” under previous governments led by Mr Sharif’s PML-N party and former President Asif’s PPP Zardari.

But for independent observers, the 2018 elections were the dirtiest in Pakistan’s history. Pre-election polls predicted a clear majority for the PML-N, but Imran Khan’s PTI ended up winning by a slim margin.

Prior to the elections, Nawaz Sharif was convicted while serving as prime minister for what the legal community had widely described as dubious motives, and put behind bars. He was then cleared to travel to the UK for medical treatment.

On election day itself, the national results service suspiciously collapsed, putting an end to hopes of rapid online transmission of the vote counts directly from each constituency. Many polling officers alleged that the numbers shown in the final results were different from those they provided after the physical count of the votes.

Since then, allegations of human rights violations have multiplied against state agencies, media censorship has worsened, and journalists who portray the military in a negative light have been threatened or even kidnapped. The most recent example is that of a journalist from Karachi who obtained and shared CCTV footage of the raid on Mr. Awan’s hotel room.

What is happening now?

No one can know for sure where the current uprising will lead.

But everyone knows that the battle is between politicians and the military, Prime Minister Imran Khan seen by his opponents as an appendix to the latter.

Opposition rallies not only questioned the legitimacy of his government, but also directly challenged army and ISI leaders, in a country with a history of civil-military tensions and coup d’etat.

The last popular uprising dates back to 2008, when General Pervez Musharraf was ousted and the constitution restored.

Since then, the country has witnessed what analysts call a rampant coup, which evolved into a “hybrid military regime” in 2018.

Ayesha Siddiqa, an expert on the Pakistani army, believes that due to the recent opposition attack, the army leaders and the ISI have started to appear weak, but not the army itself.

In order to ensure the supremacy of the constitution, members of the opposition alliance will need to develop “basic expertise that would make possible a convincing civil-military dialogue and pushback,” she said.

In addition, she said, they will have to “be ready to reorganize the socio-political and socio-economic relations overall beyond the winning elections”.

The weeks and months ahead will show whether the new opposition alliance can achieve all of this and more.