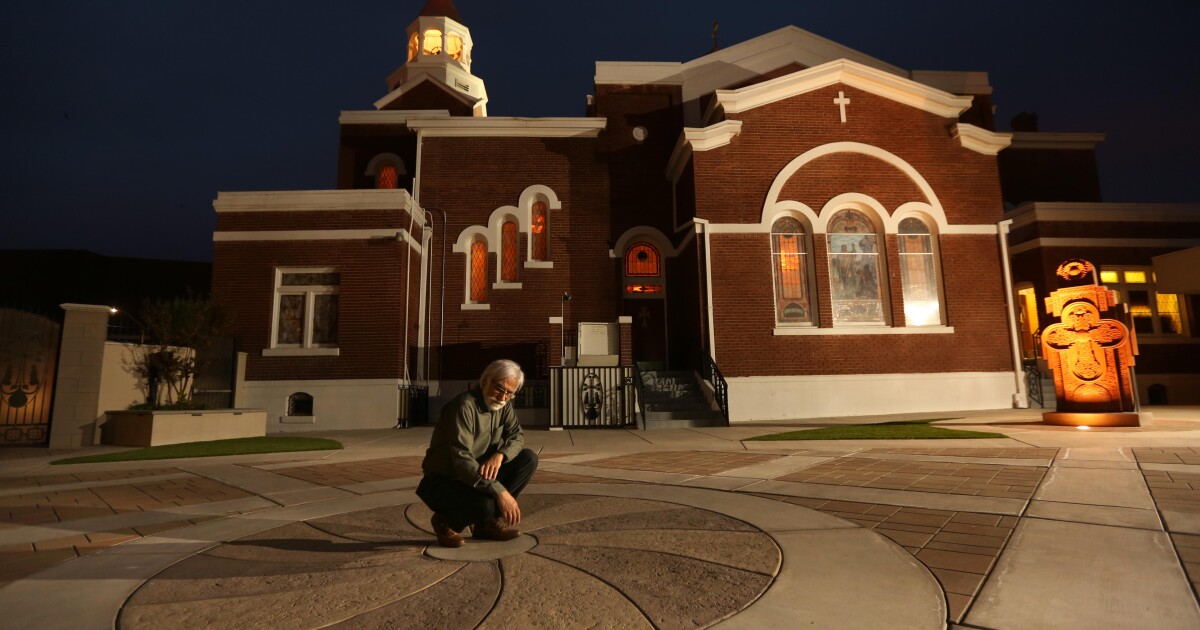 Persimmons were drying in the kitchen and a bowl of crushed walnuts was on the table that November day. Clara Margossian, 102, wore her favorite scarf tied around her head, tied under her chin. The one she keeps for company.

In the house she had built on an old fig orchard 40 years ago, she asked her keepers, Nunufar Khalatian and Margo Ellison, to go and get a box of Sees candy kept on hand for all occasions. But then she noticed that the women, both Armenian immigrants, were checking their phones, trying to hide their tears.

What happened? Margossian asked, suddenly stopping. Is it the war?

Six weeks earlier, as fighting escalated between Azerbaijan and Armenia over Nagorno-Karabakh, an enclave of antiquity and beauty in the Caucasus Mountains, Khalatian and Ellison had been too shocked to hide their emotions. They cried. They discussed how much they would send to the Armenia Fund, a Los Angeles-based humanitarian relief organization. Khalatian sent $ 1,000. Ellison found $ 700. For both, it was a sacrifice.

Margossian said she also wanted to help. No one in his family had ever been known to have donated money. But Margossian, the last of her clan and with no living parents, told the church deacon in charge of her affairs to organize a million dollar donation.

Quickly it spread throughout the diaspora that such a gift came to Armenia from a Fresno woman of over a century, daughter of the Armenian genocide of 1915.

Ellisons cousin in Armenia, back from the front lines, shot in the knee, called her to ask if she knew who this woman could be.

She told him it was her Clara, the woman she worked for. She held up her tablet so he could talk to Margossian by video. He thanked her in tears for helping a homeland she had never seen. He said the money brought special hope from a survivor of the greatest Armenian tragedy.

The life of Knarik Clara Margossians runs through the stages of history that define the Armenian experience. She was born in the shadow of genocide and now in old age she watched YouTube updates every night about a war for land her family had fled.

Her mother was pregnant with Claras’ older brother when an estimated 1.5 million Armenians were killed and expelled by Turkish Ottoman soldiers and police. Turkey continues to deny that this was genocide.

The elder brother of the Margossians was born on April 25, the day after the date recognized each year as the anniversary of the massacre. His neighboring Turkish relatives hid them. When the order was given that all Turkish families protecting Armenians would be killed, her parents started walking to Russia with a 3-day-old baby. Clara and her little sister were born in Russia. One by one, their surviving parents joined them.

The family of watchmakers prospered but remained cloistered and wary of strangers. Neither Clara nor her siblings ever married. In the 1940s, like many Armenian families before them, they moved to Fresno, the first center of the Armenian diaspora in California. A family friend told them that if they set aside some money each month to invest, they would be rich in their old age. Margossian always includes the memory of this man in her prayers.

The Armenian connection is inscribed on the landscape of the central valley. The golden winter vines on the outskirts of town, platters of recently harvested raisins, were first planted by Armenian settlers in the late 1800s. The Armenian Apostolic Church of the Holy Trinity is still standing today. the gem of downtown, even now, flanked by a flashy car dealership. Across the street, Valley Lahvosh bakery makes heart-shaped Armenian cracker bread.

Many city surnames end in ian, the old suffix meaning son of. It is the framework of The human comedy by his son William Saroyan. His novel of Ordinary People on the Home Front during World War II is considered an American anti-war classic.

Fresno became a de facto home front in the 2020 Azerbaijani-Armenian War. In Armenian school, the eyes of a mother dropping off her children were red and swollen from crying all night. Almost every day there was a peace pastry shop or a kebab sale to raise funds for Armenia. As in big cities, people protested around street corners, demanding in vain that the United States intercede. In a country grappling with a capital election, a pandemic and civil unrest, their voices have gained little strength.

When the Turkish president Recep Tayyip Erdogan supported oil-rich Azerbaijan with advanced weapons, Armenians in Fresno and elsewhere trembled, fearing that the end goal was to destroy Armenia itself.

In the evenings, Margossian usually liked to watch her favorite show, Poldark, a PBS saga retracing the generations of a family through wars. But now she’s been watching the Armenian War coverage in real time. They always reported that Armenia was winning, despite the odds and even though Khalatian and Ellison received messages from their homes announcing terrible losses.

On November 9, the reality was announced. The Armenian forces were shattered and faced some defeat. The Armenian government accepted a peace deal brokered by Russia, returning much of Nagorno-Karabakh to Azerbaijan. Russian soldiers will patrol the area and impose new borders.

The day Margossian noticed her caregivers were crying was when they first saw photos of the Azerbaijani flag flying over Shusha, the hilltop town Armenians call Shushi, and which Armenians and Azeris cherish.

Khalatian did not respond directly when Margossian asked: Is this war?

Clara-jan, she said, adding an affection often used by Armenians. Your money will help people who need medicine and places to live, even more now.

Margossian seemed to understand what this meant. Her eyes filled with tears.

I want to send a message to the Armenian people, said Margossian, who is deeply religious. Tell them to keep faith in God and in one another.

Sorrow spread throughout the community when the Armenians realized that the area they call Artsakh, home to their oldest churches and monasteries, was lost. Ellison learned that members of his family, two young brothers on his father’s side, were killed 25 minutes before the announcement of the truce.

Varoujan Der Simonian, director of the Armenian Museum in Fresno, grew up in Lebanon and has lived in Fresno for 41 years. He wondered why the loss of this bloody land had devastated him and others, even more generations distant from Armenia.

I realized it was because it was inside of me. It’s part of me, he said.

In the courtyard of the downtown church, he knelt in front of the Circle of Eternity, an Armenian symbol of infinity that is also carved in countless crosses across Nagorno-Karabakh, a place that ‘he visited several times on agricultural missions.

A showcase for the fascinating storytelling of the Los Angeles Times.

I had a hard time coming here today, he said, looking at the symbols looping, unbroken lines. This circle contains the love and creativity of the Armenian people. We will endure and continue to contribute to humanity.

In Soviet times, Turkish Azerbaijan and Armenia lived peacefully side by side. But Josef Stalin tried to erase religious and cultural identities by making Nagorno-Karabakh, an Armenian cultural touchstone, part of Azerbaijan.

When the Soviet Union broke up, the two countries became independent. Nagorno-Karabakh, with its large Armenian population, has tried to separate from Azerbaijan. Armenia has invaded the disputed territory which it considers a homeland but is internationally recognized as Azerbaijan and has driven 600,000 ethnic Turks from their homes.

The war ended in 1994, with 20,000 dead and Azerbaijanis vowing to one day reclaim what they consider their land. The Armenian commander of this war was Monte Melkonian, an American Armenian who grew up playing Little League baseball in the Central Valley.

According to Russian President Vladimir Putin, 5,000 were killed in this war. Many of the dead were civilians. Refugees are flocking to Yerevan, the capital of Armenia, even as a pandemic continues to kill. Power in an unstable region has tilted towards Turkey and Russia.

At the home of the Margossians, she watched on video as the Armenians revolted against the surrender of their country and the Armenians fled Nagorno-Karabakh, some of them burning their homes behind them.

Margossian asked if people were happy that the war was over. Khalatian grabbed the Margossians’ hand and gave it a comforting squeeze.

I think the people whose children will come home alive, on both sides, she said, are happy it’s over.

The elephant calf was rescued in Mysuru