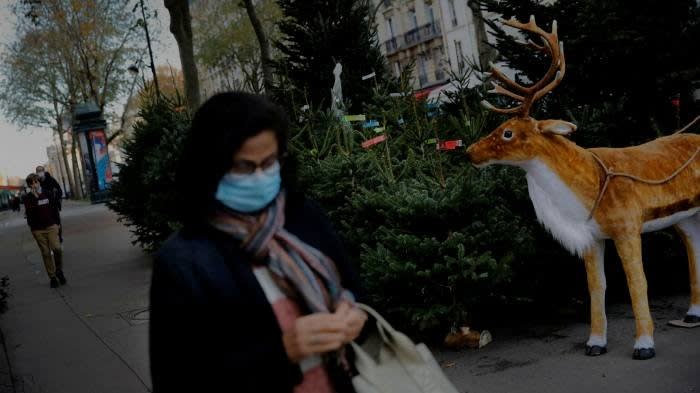 For the second time this year, policymakers from Dublin to Rome are preparing to release Covid-19 lockdowns – and ‘save Christmas’ for the family reunions of 500 million Europeans. Except this time they avoid calling it a reopening.

The restrictions put in place in late October across Europe are starting to bear fruit, with a slowdown in new infections recorded in most countries, according to data tracked by the Financial Times. This is fueling calls from retailers to end mandatory closings of stores deemed non-essential during the top-grossing trade month of the year. But unlike the summer, European governments are warning there will be no large-scale easing of restrictions.

The UK, France and Ireland are among the countries where lockdowns expire in early December. They said they would only ease restrictions gradually after being too lax the first time around.

British ministers agreed that before the Christmas season a stricter tier system will be introduced. Some mixing between households for a “small number of days” during the holiday season will be allowed, but ministers stressed that Christmas would not be “normal” this year.

Meanwhile, Chancellor Rishi Sunak has paved the way for steep tax hikes, warning that Wednesday’s spending review will expose the “economic shock” of the pandemic.

In the USA, millions plan to travel for Thanksgiving this week, despite the country approaching 200,000 positive virus cases per day. (FT, CNN)

Covid-19 has changed lives, from exercise habits to retirement plans. Should we also lock down every winter to protect thousands of people from the flu, asks Jemima Kelly.

Follow our monitoring the global economic recovery and our live blog for the latest developments.

Trump’s legal options dwindle The possibilities for Donald Trump to challenge his electoral defeat are set to narrow considerably, with three battlefield states worn by Joe Biden due to certify their results following a landslide weekend defeat for the Trump campaign, which was also Sunday called for a second recount of Georgia’s ballots. (FT, NPR)

Japan Asia Group takeover faces a militant challenge The management buyout of a small green power and tech group has put one of the world’s largest private equity firms, Carlyle, on a collision course with the family of the most activist investor. notorious of Japan. Analysts predict that after decades of almost total absence of hostile takeovers, Japan is on the brink of change. (FT)

Ethiopia tells Tigrayans to ‘save themselves’ The Ethiopian military has said it plans to strike the town of Mekelle with heavy artillery, warning civilians to leave or take cover ahead of a dangerous new phase of the two-week-old civil conflict. (FT)

China seeks first moon rock recovery since the 1970s China will launch an unmanned spacecraft to the moon this week for recover moon rocks – a first for any nation in 50 years. If successful, China will only join the then US and Soviet Union to collect lunar samples. (Reuters)

Winner of the Booker Prize Douglas Stuart won the Booker Prize 2020 for his first novel Shuggie Bath. Here are the three shortlisted authors for the FT and McKinsey’s 2020 Bracken Bower Award for Best Business Book Proposal; read excerpts from their proposals here. (FT)

South Korea export data Figures released on Monday will provide an indicator of the health of world trade. Get the latest news with our global economic recovery tracker.

Dame Elizabeth FCA Report Former High Court Judge Elizabeth Gloster will release a report on Monday on how the Financial Conduct Authority handled the collapse of London Capital & Finance investment fund. His account of the mini-bond scandal has been blocked more than once by the FCA’s delays in disclosing information. (FT)

The future of HK as the financial center of Asia Singapore and Tokyo are on the verge of seizing opportunities, but China’s shadow looms large, writes Leo Lewis.
Despite the coldness of Beijing’s new national security law, the disappearance of the territory as a financial center is a theory awaiting a real test. Xi Jinping’s goal of doubling the Chinese economy is a fantasy, writes Michael Pettis. (FT)

The race to find a green energy storage solution Renewable energies such as wind and solar are increasingly cheaper than fossil fuels in most parts of the world, but they need storage to be a viable and stable source of energy. As billions are invested in renewables, there is a race to produce enough storage batteries. (FT)

Loneliness and me Rather horrifying, the isolation the pandemic has imposed this year is not that different from my normal life, writes Claire Bushey. Millions of us lived with this curse long before the pandemic. With empty office buildings, the lonely working lives of office security personnel are often forgotten. (FT)

How Xi ruined it Donald Trump’s presidency gave Xi Jinping a a unique opportunity to expand the influence of China at America’s expense. Four years later, that hasn’t happened and a Joe Biden administration makes it even less likely. (Atlantic)

Could you restore an abandoned house? The Ultimate Lockdown Distraction Therapy: Restoring a Heap of Legacy. Take Horse Sand Fort, this 61m diameter man-made island costing £ 750,000 was built to stop the invasion of Napoleon III. A potential buyer has considered converting it to a legalized marijuana farm. But intrepid renovators need dedication and seriousness. (FT)

Podcast of the day

Simon Schama on the call to culture Simon Schama is one of the greatest historians and art historians in the world. He joins Culture Call host Lilah Raptopoulos to talk about Joe Biden’s victory after a tumultuous election and colonialism. They are joined from Lagos by West Africa correspondent Neil Munshi. Listen on FT.com, Spotify, or Apple podcasts. (FT)

Illustration of the day

Thanks for the reading. Send your recommendations and comments to [email protected]

Jokowi’s son and son-in-law supported by the Gelora party, Fadli Zon suggests to Fahri Hamzah as advisor to the president

Michigan legislative leader: Trump did not call for election interference