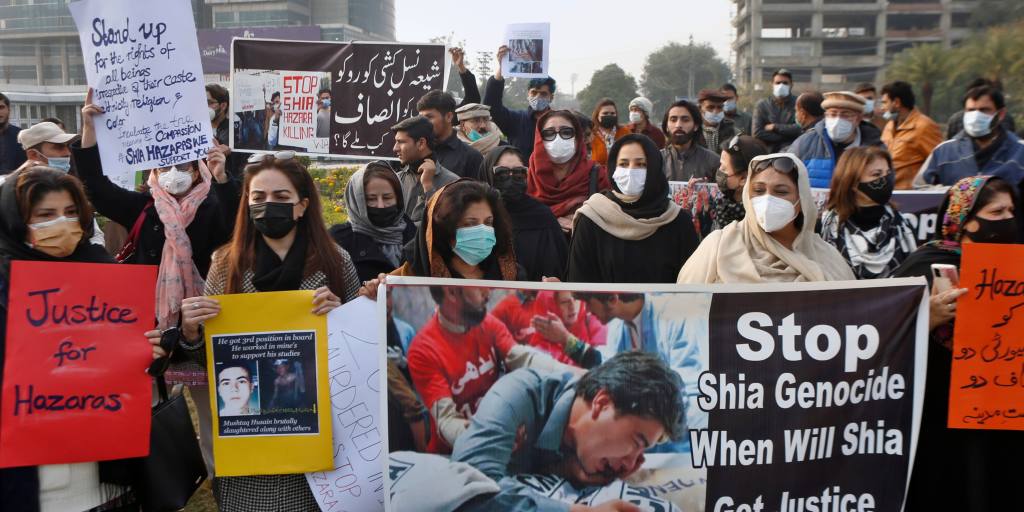 KARACHI – A deadly attack by ISIS in southwestern Pakistan targeting Shia coal miners has once again rekindled security threats to the China Belt and Road Initiative and increased pressure on the Prime Minister Imran Khan to take action against the militants.

On the morning of January 3, unidentified assailants kidnapped 11 coal miners from the town of Mach, 48 km east of Quetta, the capital of southwestern Balochistan province. The attackers blindfolded the coal miners and killed them by slitting their throats. All of the coal miners killed were from the Shiite Hazara ethnic community.

Later, ISIS’s Khorasan province – an offshoot of ISIS with alleged hiding places in Pakistan and Afghanistan – claimed responsibility for the attack via the group’s Amaq news agency. The militant group also posted photos of the massacre.

These brutal killings sparked a demonstration in Quetta by the Hazara community with the bodies of the slain coal miners. Protesters refused to bury the dead until the Pakistani government takes concrete action to ensure security in the future. The protest ended at midnight on Saturday when the Balochistan regional government agreed to form a high-level commission of inquiry.

This IS attack reignited security threats to the China-Pakistan Economic Corridor, or CPEC – the Pakistani $ 50 billion component of the Belt and Road Initiative.

People protest near the bodies of 11 coal miners who were killed in remote Balochistan province, a key route along the China-Pakistan economic corridor. © Getty Images

According to ISIS ideology, atheistic China is an enemy because it has forcibly encroached on Muslims in China’s Xinjiang Province by not allowing Uyghur Muslims to practice Islam.

According to experts, this ISIS attack has left Balochistan unsafe for Belt and Road projects in the future. Bostan, the site chosen for one of the nine Special Economic Zones under the second phase of the CPEC, is located 100 km north of Mach where the coal miners were killed.

“The deterioration of the situation in Balochistan will only create more difficulties for the already problematic implementation of the China-Pakistan economic corridor projects in the province,” said Jeremy Garlick, assistant professor of international relations at the University of economy of Prague, in Nikkei Asia. . He added that this terrorist incident could also hinder other initiatives aimed at securing foreign direct investment in Balochistan.

Despite growing security threats, experts believe Beijing will not delay projects in Balochistan. “Beijing has a long history of showing a high tolerance for risk in deploying capital in volatile areas,” said Michael Kugelman, deputy director of the Asia program at the Wilson Center, adding: “We see this not only in Pakistan but also in its investments in unstable areas of Africa. and Southeast Asia. “

But this latest attack will show Beijing just how precarious the security situation is in Balochistan. “We have already seen recent outbreaks of separatist violence and the additional reality of [Islamic State] means that Chinese projects face the dual threat of separatist and Islamist terror, ”Kugelman added.

This terrorist attack and subsequent protests by the Hazara community also put enormous pressure on the Pakistani government to root out IS militants from Baluchistan. Experts believe the government has been put on the defensive and the outlook has been awful.

“This [terror attack] at least encourage Beijing to put pressure on Islamabad to ensure better security in the region; this is not a new request from Beijing, and one which has not had the desired effects, given that violence continues to erupt, ”Kugelman said.

While the Islamic State claimed responsibility for the attack, Pakistani officials still accuse India of orchestrating this attack to destabilize Pakistan.

“It is a well thought out decision and in this ploy, the aim is to stir up the Shiite-Sunni divide in the country, which will have negative implications on Pakistan’s domestic and foreign policy,” the senator said. Anwaar ul Haq Kakar in Nikkei.

Control of 30% of the world’s nickel, Jokowi wants to focus on the development of downstream industries