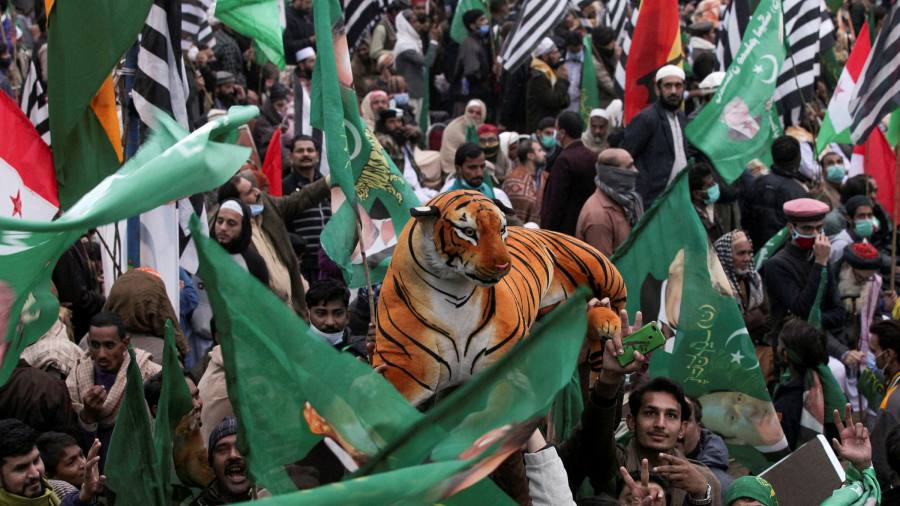 On December 27, the young leaders of Pakistan’s political dynasties made a rare public appearance together to commemorate the 13th anniversary of the assassination of Benazir Bhutto.

Maryam Nawaz, daughter of Nawaz Sharif, exiled former prime minister and leader of the Pakistani Muslim League Nawaz, stood alongside Bilawal Bhutto Zardari, chairman of the Pakistan People’s Party, and placed red rose petals on the grave from his mother.

The show of unity by the new generation of leaders of Pakistan’s most powerful political families was a show of force at a time when 10 opposition parties united as the Pakistani Democratic Movement to take over the government of Imran Khan.

At a rally in Malakand on Monday, Bhutto Zardari, 32, said Khan was a “chosen leader” by the military and criticized the government’s economic strategy.

“The economies of other countries like Afghanistan and Bangladesh are doing better than Pakistan,” he said. “Together, we will make these puppets flee”.

Islamabad has not been able to tame commodity prices – the cost of chicken and potatoes increased by more than 15 percent between October and November in rural areas – and Pakistanis are losing patience with it. the former World Cup-winning cricket captain. The PDM tapped into this anger by organizing protests across the country.

“The problem of inflation is still not addressed, it has to do with how supply chains have been disrupted, but also governance issues,” said Bilal Gilani, executive director of the Pakistan subsidiary. of Gallup International in Islamabad. “There is a significant margin for political parties to take advantage of the situation.”

The coronavirus initially supported Mr Khan. Its popularity had waned before the virus hit, but polls over the past year have shown Pakistanis to approve of the way it has responded to the crisis.

His populist rhetoric to spare workers from a severe lockdown resonated with voters who believed the coronavirus threat was overblown. According to the latest poll released in January, 73% of Pakistanis believe the federal government is handling the pandemic well, well above the global average of 52%, according to Gallup Pakistan.

However, this goodwill is fading as consumers feel the high price bite and face the prospect of higher electricity tariffs. A gas shortage that began with the onset of winter, the result of chronic underinvestment that analysts said was expected and could have been avoided, is putting increased pressure on the Khan government.

Imran Khan is greeted by Mohammed ben Salman in 2019. Saudi Arabia has asked Pakistan to repay billions of dollars in loans © VIA REUTERS

Mr Khan admitted in December that his ruling Pakistan Tehreek-i-Insaf (PTI) did not have enough time to do their ‘homework’ before taking office in 2018, saying it took three months to understand the problems.

Sensing its weakness, the opposition stepped up its attacks. “It’s a dead end,” Kamal Munir of Cambridge University said of Khan’s government and the opposition. “Imran can take the game to the last session, but I think the momentum is with the PDM.”

The PDM has been organizing rallies across the country for months, defying critics who said the unlikely coalition, which includes fire brigade clerk Fazlur Rehman, would fall apart.

The coalition threatened to orchestrate a massive resignation of politicians from the country’s assemblies on January 31 to spark a crisis and force a new election.

But Mr Bhutto’s party, which controls Sindh province, has said it will challenge the upcoming senatorial elections, a move that has undermined the threat of mass resignation.

“It’s very delicately posed right now,” said Sushant Sareen, a security analyst at the Observer Research Foundation in New Delhi, who added that the fight was as much about political pressure as it was about the powerful military’s support for the government. by Mr. Khan.

“Could they [the military] live with a PML-N government? How do they deal with someone like Maryam? Mr Sareen asked, referring to Ms Nawaz, 47, who has become a political star.

As the battle escalates, there are growing concerns about the government’s ability to stabilize the economy and contain inflation.

Saudi Arabia and the United Arab Emirates have both asked Pakistan to repay up to $ 5 billion in loans before maturity, forcing Islamabad to look to China for more money. A $ 6 billion IMF program has been delayed because the government is reluctant to introduce more taxes and raise tariffs.

“With the PDM protests going on, if I were the prime minister, I would be reluctant to take action which in turn would strengthen the opinion of the PDM,” said Abid Hasan, a former Pakistani adviser to the World Bank.

“The economy is in terrible shape and requires surgery,” said Gilani. “Coping for the next three years may be a victory for the PTI, but it is a loss for Pakistan.”