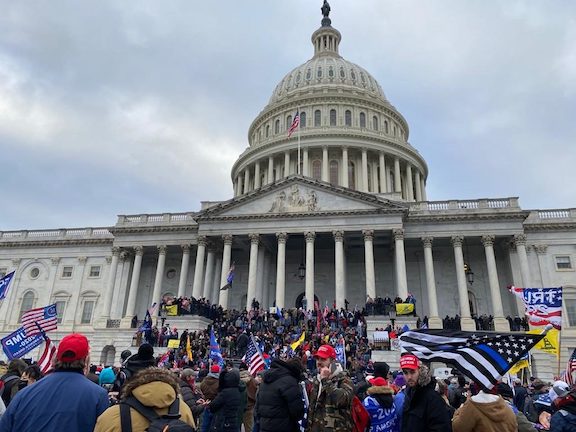 The riot, violent break-in, destruction and death that took place last Wednesday was an affront to American democracy. It was also the culmination of four years of reckless disregard for democratic standards and principles.

As Americans, we were in the front row and watched the President defame and dismantle democratic institutions one by one, starting with the press and ending with his attempts to rob the American people of their votes, laying bare the flaws in our democracy. , which has often given way to partisan politics driven by the enraged desire of certain elected officials to retain their seats and their levers of power.

The president and his supporters brushed aside the serious charges against him when he was impeached by Congress the first time he denied a foreign government Congress-mandated funding in exchange for information he could use against his political opponents.

The fervent support he received from his allies then and throughout his presidency allowed him to push the boundaries further and further, his latest act being the belligerent lies he spread about the results. of the last November elections, which he lost on all sides.

His contempt for the rule of law and the constitution has led him to embrace despotic leaders, such as his Turkish counterpart Recep Tayyip Erdogan who rules his country without any consideration for human rights and democratic values.

A glaring example of the US administration’s contempt for democracy has been the slow and anemic response to the beatings suffered by US protesters by bodyguards Erdogans, who were from Turkey, during a peaceful protest in 2017. ordering violence against Americans in their own countries where they exercised their constitutionally guaranteed democratic freedoms of speech and assembly demonstrated Presidents’ lack of understanding of democratic norms and showed how far he was prepared to go to appease a despot, whom he sought to imitate.

Attacks and erosion of democracy have increased in recent years around the world, where leaders have resorted to violence and subversion to nullify peoples’ right to vote and self-determination. Last year we saw Alexander Lukashenko of Belarus crush his opponents and force himself back to power. Sadly, a similar scenario is playing out in Armenia, where Prime Minister Nikol Pashinyan, who was elected in what can be considered the first democratic election, relies on and deploys the country’s security apparatus to silence the opponents in order to maintain its grip on power, despite leading Armenia to a crushing defeat in the Karabakh War this fall.

American democracy has its faults. What our founders put on paper was an ideal whose implementation became murky as financial, economic and personal interests rocked the system, throwing loopholes for the powerful. Despite this, American democracy, as practiced here in the United States, remains a true beacon for the world.

This is why organizations such as the Armenian National Committee of America have spent resources to educate and empower our community to vote and have our voices heard in the halls of power in America, always emphasizing that those who vote , it’s their voice, and no one has. the right to silence him. This simple concept has helped catapult issues of importance to the Armenian community onto the agendas of town halls, state houses and Congress. The advocacy and engagement of our communities has also helped us succeed in advancing justice and our national aspirations.

When the president lost the election in November, he used lies, threats and intimidation to advance a fictitious and spurious narrative, prompting his supporters to adopt and use the same vile tactics that resulted in the violent siege of the Capitol. American.

Last week I spoke to some of the staff who work for some of our allies and advocates in Congress. They recounted in horror what they witnessed in the attack on Congress and spoke of the dangers if decisive action is not taken to punish those who organized and instigated violence against the Americas, a symbol of democracy. .

Although they witnessed and experienced the events of last Wednesday, some still hesitate in their condemnation and the need to preserve, protect and advance democracy, setting a dangerous precedent for future generations of Americans.

Democracy is the foundation of this country. Anyone, regardless of their position, tries to violate this position must be held accountable, in order to strengthen these principles and ensure that no one can undermine the foundations of the country.