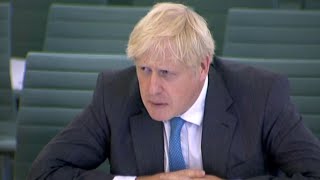 The Liaison Committee observes a strangely courteous etiquette in its triennial Prime Minister’s Grill. Like a medieval jousting tournament, this formidable caucus of select committee leaders presents an atmosphere of false kindness, which invariably runs into blood.

The chairman of the committee, Sir Bernard Jenkin, watched the affable master of ceremonies every inch as he dispensed the usual pleasantries.

Would the Prime Minister be good enough to be questioned twice more that year, he asked? Boris responded with an ironic glow that he was eager to continue such sessions, as if there was nowhere to be rather than facing a miserable two hours of virtual spraying from the Star Chamber.

The atmosphere of the strangely deserted room was loaded with sadness. Sir Bernard sat solemnly at the end of the long table, flanked by a single masked clerk a few seats away.

The first to zoom in was Jeremy Hunt, his exaggerated politeness providing the perfect contrast to Boriss’ knockabout style. Amiable even by videoconference, Hunt worded every statement in pleasures, thanks and praise.

In his courteous questioning, Hunt betrayed a hint of the obsequiousness that marked the political interview of the 1940s and 1950s, before the advent of Robin Day and Jeremy Paxman.

You half-expected him to ask you: Would you like to share your thoughts on the gold standard, Prime Minister? Such was his silky gallantry, he was even hesitant to reveal his mother’s age of 80 when discussing his recent vaccination.

Most people, I think, are incredibly encouraged that we are doing better than any country of a similar size in the world in terms of deployment, “Hunt began, innocently enough, before launching a decidedly blue bloodbath.

Can I just ask you why the public is not allowed to know anything except the most basic information on the number of people who actually received the blow? He jumped up, eyes wide dramatically as he revealed the iron fist hidden in the velvet glove.

Appearances have proven to be equally deceptive with Labors Catherine McKinnell. A vase of flowers behind her framed her head on the screen, like a flowered headdress by Swedish Midsommar.

But there was nothing flowery about his questioning. Is the Prime Minister not ashamed to have been educated on feeding hungry children by Marcus Rashford? She cried. In view of the events, Mr. Prime Minister, do you regret having said in 2018 that Donald Trump deserved a Nobel Peace Prize?

Yvette Cooper sported a murderous half-smile. Radiant with crisp contempt, she grilled the Prime Minister over the government’s failure to screen travelers from South Africa and Brazil, (countries that share our nations with the dubious honor of inspiring eponymous variants of Covid-19).

To describe what happened next as a mauling would be over-promoting the saber-toothed tigers.

As the Prime Minister squirmed and stammered, his arms slumped on the table, his eyebrows threatened to disappear over his forehead and perch somewhere in his bangs.

Several agonizing minutes later, this ordeal was over. However, that only proved to be a temporary reprieve when the virtual baton was passed to Hilary Benn.

Sir Bill Cash zoomed in on some sort of medieval tithe barn to ask the Prime Minister about trade friction with Northern Ireland. As Boris talked about the seed potatoes, I imagined Sir Bill diligently counting his tenants’ corn before turning a few widows and orphans in the snow.

The Prime Minister paled and blushed every now and then as the committee pushed him, toast him and finally spit him. Scarcely had the good knight Sir Bernard finished praising his generosity, when the squire Boris had collapsed.

Turkeys without wealth fund a tangle of problems