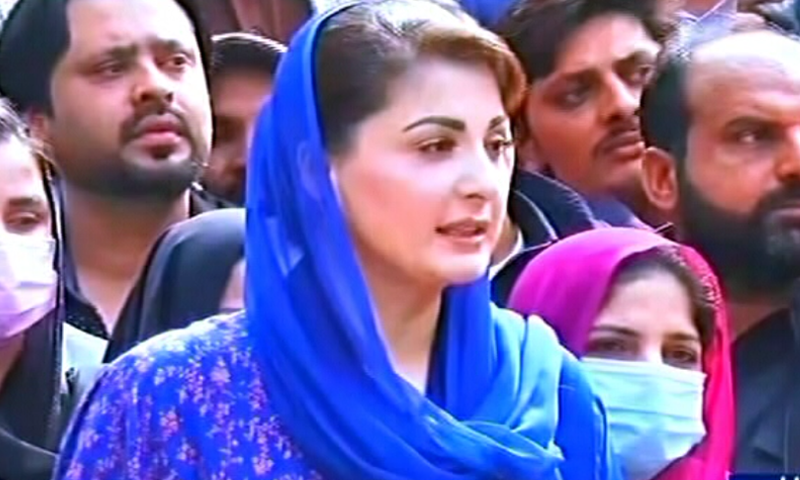 PML-N Vice President Maryam Nawaz said Monday ruling Pakistan Tehreek-i-Insaf (PTI) had nominated people for the upcoming senatorial elections who were “billionaires with no connection or service to the party.” , claiming they were given tickets to use their wealth to “buy votes” in the polls.

She was speaking to reporters in Jati Umra before she left for Wazirabad where she will address a rally as part of the election campaign for PP-51 as announced by the PML-N on Twitter.

“You gave tickets to millionaires and billionaires who have no connection or service to the party, what does that mean then?” Maryam asked, adding that the PTI wanted these people to buy votes with their resources and enter the Senate. “It is very important to block the path of these people.”

She said members of the current government “from all provinces have risen” to protest against the distribution of tickets by the PTI for the senatorial elections. She asked if Prime Minister Imran Khan could “not find a person in his 22 years of struggle” who had been by his side during this period and could have been appointed to the Senate.

The PML-N leader added that she hoped “good people and politicians with a history of political struggle” would come to the upper house. She said she was “proud” of the PML-N and party leader Nawaz Sharif for appointing ordinary party workers who “are neither millionaires nor multibillionaires. They are normal middle-class workers with a history of political struggle. ”

“The PML-N fulfilled the nation’s right to real representation and Mian [Nawaz Sharif] sahib did not give a ticket to any billionaire or expert in buying and selling [of votes]. This is the real change. ”

In a statement released earlier, PML-N Information Secretary Marryum Aurangzeb also alleged that members of the PTI disagreed with the prime minister over “selling tickets”. She said that this “revolt” by PTI members exposed the prime minister’s campaign for an open vote.

Meanwhile, Sindh Minister of Information and Local Organizations Syed Nasir Hussain Shah made similar comments during a speech in Karachi. He said that when the PTI gave tickets to “paratroopers” instead of “visionary cadres, sympathizers and sympathizers”, differences arose.

He said there was a similar situation in all four provinces with high-profile PTI members and lawmakers voicing their grievances over Senate appointments.

The PTI leadership in Islamabad had granted a ticket to Abdul Qadir, a business tycoon affiliated with the construction industry, for contesting the senatorial elections to a general seat in Balochistan. He soon had to withdraw the party ticket after strong opposition from the PTI provincial leadership and the zone leaders.

The party’s high command decided to take the ticket back to Qadir and nominated Zahoor Agha for the election, Prime Minister Shahbaz Gill’s adviser confirmed on Saturday. PTI provincial spokesperson for Balochistan, Asif Tareen, said the party’s previous decision was taken in Islamabad without even consulting the party’s leadership in Balochistan.

PTI regional leaders said the ticket was awarded to someone who had nothing to do with the party. They had demanded an immediate withdrawal of the party ticket and an investigation into who introduced Abdul Qadir to Prime Minister Imran and supported his name for a party ticket.

Maryam said she hoped the 10-party Pakistan Democratic Movement (PDM) would remain intact even after “this government disappears” and that it could craft a new charter to rule the country. She also refuted the idea that the PML-N and the PDM needed or were engaged in sideways discussions, saying “only those in trouble need sideways discussions.”

She also told the media that she had a health problem that required surgery that could not be performed in Pakistan, but despite this, she did not intend to ask the government to remove her name from the exit checklist. “I don’t need to leave this country, my life and my death are in this country”, she said

While addressing the three institutions of administration, bureaucracy and police, Maryam reminded them that they were servants of the people and the country and that people would “look and remember their faces” s ‘they were trying to help the PTI in the next par-elections.

“You will have to respond seriously to this, so I hope you won’t betray your job, your oath and your country.”

She also lamented the treatment of federal employees protesting in Islamabad and criticized the show cause notices and warning letters sent to Punjab bureaucrats for their performance.

Donald Trump seeks to reassert himself after acquittal of impeachment, plans to do interviews in coming weeks