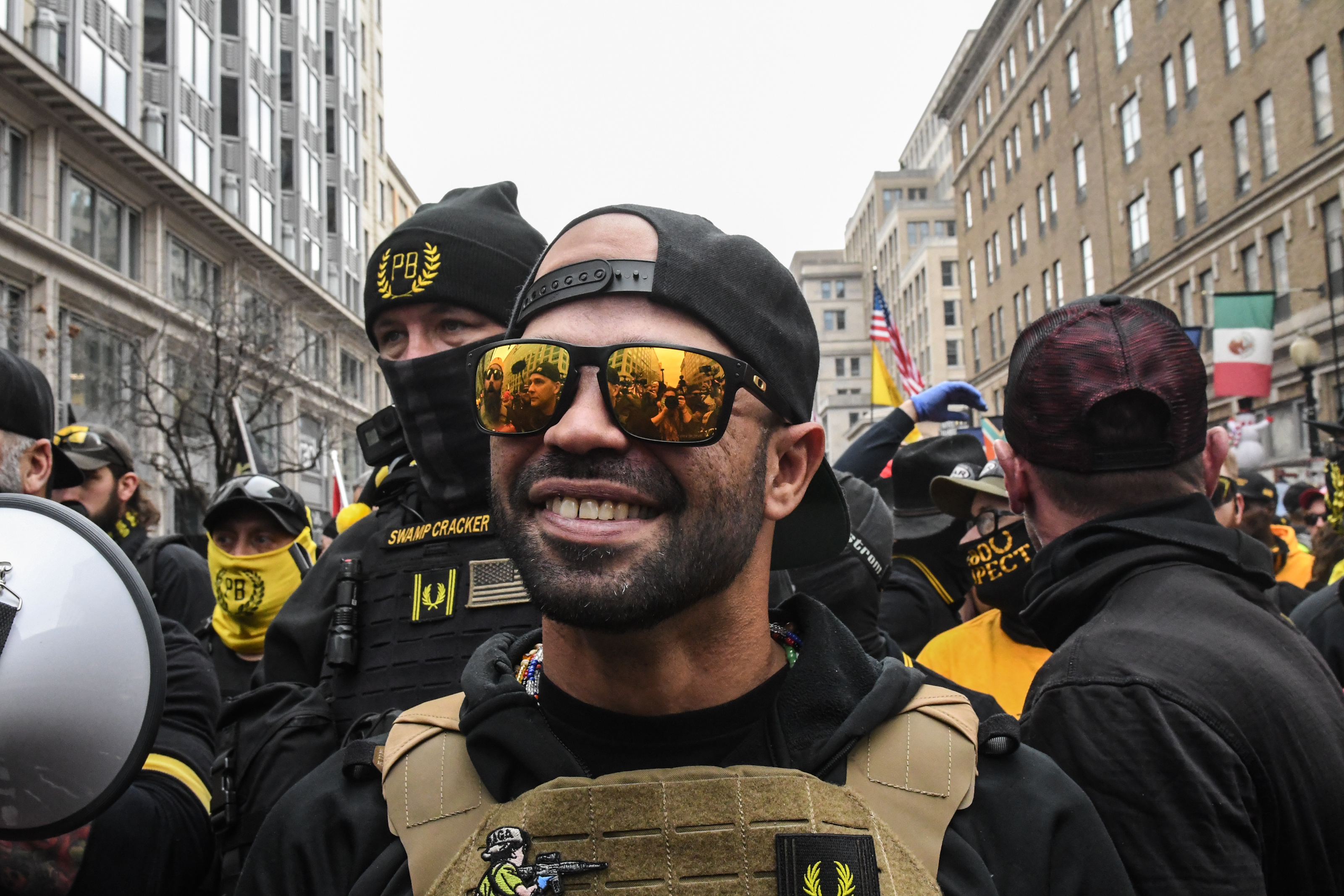 The former president was acquitted for the second time on Saturday when only 7 Republicans joined the Democrats, well below the 67 senators needed to convict him.

Following the conclusion of the impeachment trial, Trump defiantly declared that he would not be leaving and would soon reveal information about the future of MAGA. [Make America Great Again] movement.

In a statement, he said: “Our historic, patriotic and magnificent movement to make America great again is only just beginning. In the months to come, I have a lot to share with you, and I look forward to continue our incredible journey together to make America great for all of our people.

After Trump’s acquittal, Proud Boy channels on Telegram erupted with joy as dozens of followers shared memes and posts praising the former president.

On leader Tarrio’s Telegram channel, dozens of followers shared Trump gifs and TikToks as well as photoshopped stickers of the former president wearing a black and yellow-trimmed Fred Perry polo shirt and Proud Boys hat, all doing part of the group’s uniform.

Tarrio’s account also shared a 23-second clip of Trump dancing to a band from Pepe the Frog and said, “Lol f *** your impeachment. Over 75 million Americans are giving nothing. Trump 2024!”

Another added: This is the best thing I have seen since November. I love our president, his explosive ways make me smile and laugh every day! “

Enrique Tarrio said the Proud Boys are not leaving and are eagerly awaiting what he hopes will be Donald Trump’s presidential run in 2024. In this photo, Proud Boys leader Enrique Tarrio stands outside Harry’s bar during of a demonstration on December 12, 2020. in Washington, DC. Stephanie Keith / Staff / Getty

The Proud Boys, who have been labeled as an “ anti-Muslim ” and “ misogynist ” hate group by the Southern Poverty Law Center, previously praised the former president after Trump told his members to “take to step back and be ready “during his debate with Joe Biden in Cleveland, Ohio on September 29.

But, several Telegram channels in the US and Europe, including Ireland and UK, were keen to focus and share a post uploaded to Tarrio’s account that targeted articles suggesting the Proud Boys were on the way to collapse.

The statement, attributed to Tarrio, said: “You will never be able to break the bonds created by men who shared their joy, sweat, blood and tears. Journalists can write about it … our enemies I can wish … but I will not make it a reality. “

“We are western chauvinists … and we will never apologize for this shit. We are here to stay. Cry louder.”

Several Proud Boys were arrested following the assault on Capitol Hill, and the Canadian Parliament designated the group as a terrorist organization, highlighting the role of its members in the insurgency.

Miami-based Tarrio was himself arrested on January 4 on weapons charges and the alleged burning of a Black Lives Matter flag in Washington DC in December 2020. He was released on bail and was released on bail. ordered to report regularly to officials in accordance with the conditions of his release.

But, according to the Washington Post, judges allegedly summoned the president of the Proud Boys with the Adjudication Services Agency by writing to the courts on February 4 to report that Tarrio had not called or verified his address.

Washington DC Superior Court judges have since ordered Tarrio to explain why he should not have his bail revoked.

Tarrio disputed the allegations and told the Post he had “repeatedly” tried to contact them. He added: “They don’t make it easy to reach them. I’ll call them right away.”