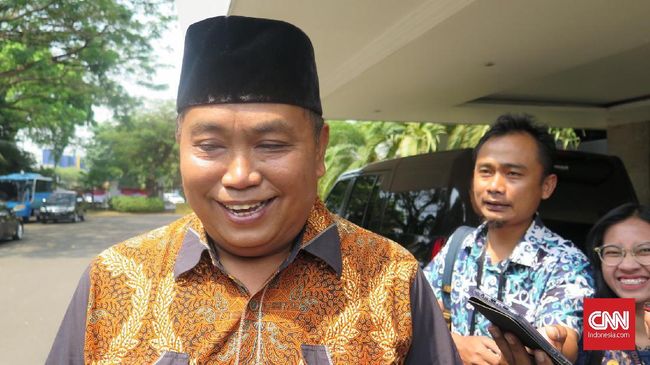 Party executives GerindraArief Poyuono evaluated the general chairman of the Gerindra party Prabowo Subiantowill not be able to become President of the Republic of Indonesia in 2024 because he will be overwhelmed by the impact of the corona virus (Covid-19) pandemic which is expected to last for a long time.

He then proposed that the 1945 Constitution be amended so that Joko Widodomay return to run as a presidential candidate in 2024 for a third term.

“He can’t afford it [Prabowo jadi presiden] faced with a situation like this and sure if he [Prabowo] go ahead against Jokowi, he must be [Prabowo] lost, ”Poyuono said when speaking with CNNIndonesia.com, Wednesday (17/2).

He said changing the maximum term of a presidential term from a maximum of two to three terms should be considered in light of Jokowi’s success during his tenure as president.

One of Jokowi’s successes, Poyuono gave an example, has been to ensure that the Indonesian economy does not contract too much amid the Covid-19 pandemic.

“It is the success and the ability of a Jokowi to cultivate the country in times of crisis,” he said.

He continued, changing the maximum limit for a presidential term from a maximum of two to three terms should also be considered, as there is no good figure to separate Indonesia from Jokowi.

According to him, two cadres of the Gerindra party, Prabowo and Sandiaga Uno, are also unable to lead Indonesia during the next term.

Poyuono explained that Prabowo’s inability to become President of the Republic of Indonesia in 2024 can also be seen from the results of surveys conducted so far by a number of institutions. Prabowo’s eligibility has always been under Central Java Governor Ganjar Pranowo.

“The poll [Prabowo] It’s only less than 20 percent among the other candidates and they still lose to Ganjar, ”he said.

Even so with Password. According to Poyuono, ethnic factors also affect the figure who is currently the Minister of Tourism and Creative Economy (Menparekraf) who is difficult to win in the next presidential election in 2024.

“Look, Sandi’s eligibility is below, both on the primordial side, Sandi is not Javanese,” he said.

Regarding the urgent need to become President of the Republic of Indonesia for three terms, Jokowi once stressed that he did not agree with the proposal. Jokowi actually suspects that the party offering the speech wants to make it happen.

“If anyone comes up with it, there are three (motives) in my opinion, wanting to slap me, wanting to look for a face, or wanting to dive in. That’s it,” Jokowi said at Merdeka Palace, Jakarta, December 2, 2019.

“Now the reality is right, [muncul usul] the president is elected by the MPR, the president for three terms. It is therefore better not to have any amendments. We only focus on the external pressures that are not easily resolved, ”he said.

EU, WHO / Europe join forces to support deployment of COVID-19 vaccines and vaccination in Azerbaijan