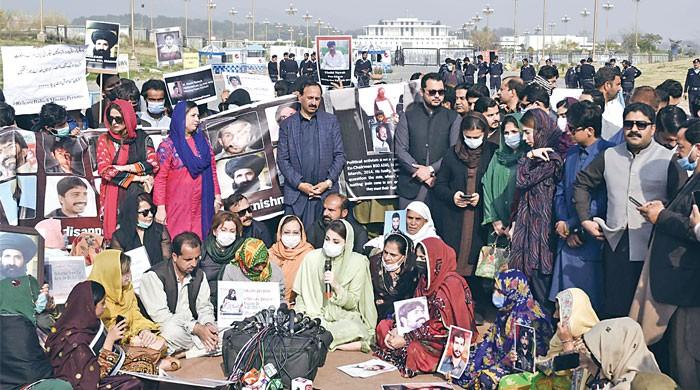 “You are placed in the corridors of power,” she said in a message to the Prime Minister and his government as she went to the site of the demonstration. “It is your duty to listen to these people.” Maryam said the government should inform relatives of missing persons of their plight, adding that “the victims are victims, they should not be associated with any province”.

She said the prime minister should come to D-Chowk and talk to the protesters, saying the missing persons commission was of no value. “You haven’t accepted any commission to date. A commission is useless,” she said, describing it as “eye drops”. Maryam said that if anyone had committed a crime, there were courts in the country to deal with them in accordance with legal process.

“The state is responsible for the protection of its citizens,” she said, reiterating her position that if a missing person is guilty of a crime, they should be tried by a court. When asked what she would do for the missing, Maryam replied that there was nothing she could do but listen to their grievances.

“They say a lot of things before they come to power. Later compulsions come in the way,” said the PML-N leader, taking a jibe in the PTI government. Maryam lamented that everyone in the country, from doctors to female health workers, is on the streets demanding justice.

Meanwhile, Maryam Nawaz said Pakistan’s Tehreek-e-Insaf (PTI) government was using the National Accountability Bureau (NAB) to harass its opponents. Addressing a rally for the PK-63 Provincial Assembly constituency by-election here, she said the day was not far off when the NAB would face the wrath of the people.

Criticizing the PTI government, Maryam Nawaz said Prime Minister Imran Khan was responsible for record inflation in the country. She said whoever called the other thieves was the boss of all the mafias.

The PML-N leader said that members of all the mafias joined the PTI government, which was responsible for the sugar and flour crisis. Maryam Nawaz said the prices of everyday items were beyond the reach of the poor. She said the prices of drugs had also increased.

The PML-N leader said the purchasing power of the people had eroded due to the grueling inflation of the PTI leaders, who could not keep their promises and added to the people’s woes. She said the growth rate was 5.7% when the PML-N was in power, but fell to zero in Imran Khan’s government, which was declared Sadiq and Amin by the former Chief Justice Saqib Nisar.

Maryam Nawaz said now is the time to hold those who held back the country’s economic growth to account. She said Prime Minister Imran Khan was not obedient to the nation, but to someone else.

Asking the government to say how many houses were built and how many jobs were created, she added that the PTI government had given the NRO to Papa Johns. She urged people to vote for candidate PML-N to tell the leaders and they had had enough and wanted to see the end of this government.

Maryam Nawaz said the residents of Khyber Pakhtunkhwa have been at the mercy of PTI leaders for the past eight years. She said people are cursing the PTI government and thinking about ways to get rid of this setup.

How Democrats Can Make Sure Trump Never Shows Up Again