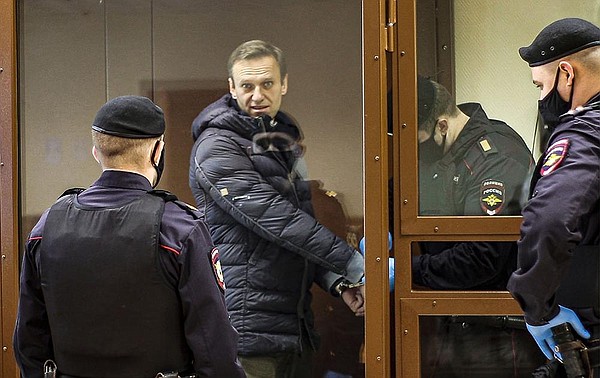 Navalny dismisses accusations of slander by the veteran who was featured in a video last year promoting constitutional amendments that allowed President Vladimir Putin’s extension to power.

Navalny, 44, Putin’s most prominent anti-corruption investigator and critic, was arrested last month upon his return from Germany, where he spent five months recovering from poisoning with a nerve agent he attributes to Kremlin. Russian authorities dismissed the accusation.

Earlier this month, a Moscow court sentenced Navalny to two years and eight months in prison for violating the terms of his probation while convalescing in Germany. The sentence stems from a 2014 embezzlement conviction which Navalny dismissed as fabricated and which the European Court of Human Rights ruled illegal.

In Tuesday’s hearings at Moscow’s Babushkinsky District Court, prosecutors asked the judge to order Navalny to pay a fine of around $ 13,000 for slandering the 94-year-old veteran. Navalny dismissed the slander charges and described them as part of the authorities’ efforts to disparage him.

BAGHDAD – A US-led coalition contractor was killed and an unknown number of other civilians were injured when a rocket barrage struck outside an airport near where the US forces are based in northern Iraq, Iraqi security and coalition officials said.

More than a dozen rockets struck Monday evening in areas between the civilian international airport in the city of Irbil in the Iraqi semi-autonomous region ruled by Kurds and the nearby base housing US troops.

A little-known Shiite militant group calling themselves Saraya Awliya al-Dam, in Arabic for the Blood Guardians Brigade, claimed responsibility for the attack.

U.S. Army Col. Wayne Marotto said on Tuesday that a coalition civilian contractor who was not a U.S. citizen was killed.

Marotto also said that a member of the US military service and eight civilian contractors were injured in the assault. An unknown number of Iraqi and Kurdish civilians were injured when rockets struck busy residential areas near the airport.

US Secretary of State Antony Blinken has said the United States is committed to supporting the investigation into the attack.

ANKARA, Turkey – Turkish President Recep Tayyip Erdogan on Tuesday pledged to expand cross-border operations against Kurdish militants in northern Iraq after the killing of 13 Turkish soldiers, police and civilians who had been kidnapped by Kurdish insurgents .

In a speech to supporters of his ruling party, Erdogan also said the killings had strengthened Turkey’s resolve to form a safe zone along its border in northern Iraq to protect Turkey’s borders. of the Kurdistan Workers’ Party banned.

The bodies of the 13 victims were discovered in a cave complex in the Gara region of northern Iraq, near the Turkish border, during an operation against the Kurdistan Workers’ Party, launched on February 10 , which aimed to free the hostages.

Officials said 12 of the victims were shot in the head and one died of a shoulder injury. The hostages were abducted in Turkey in 2015 and 2016.

BERLIN – The European Court of Human Rights on Tuesday dismissed a complaint against Germany’s refusal to prosecute an officer who ordered the deadly 2009 bombing of two tankers in northern Afghanistan.

Dozens of people died when US Air Force planes bombed tankers hijacked by the Taliban near Kunduz. The strike was ordered by the commander of the German base in Kunduz, Colonel Georg Klein, who feared that the insurgents could use the trucks to carry out attacks.

Contrary to the intelligence on which Klein based his decision, most of those swarming in the trucks were local civilians asked by the Taliban to siphon fuel from the vehicles after they got stuck in a riverbed.

An Afghan who lost two sons aged 8 and 12 in the airstrike, Abdul Hanan, took the case to the European Court of Human Rights after German authorities refused to prosecute Klein. He alleged that Germany failed to conduct an effective investigation.

The Strasbourg, France-based court dismissed the complaints. He concluded that German federal prosecutors could “rely on a considerable amount of documentation regarding the circumstances and impact of the airstrike”.

He also noted that the courts, including Germany’s highest, the Federal Constitutional Court, have dismissed Hanan’s cases.

Donald Trump admits he misses being president, hints at White House race in 2024