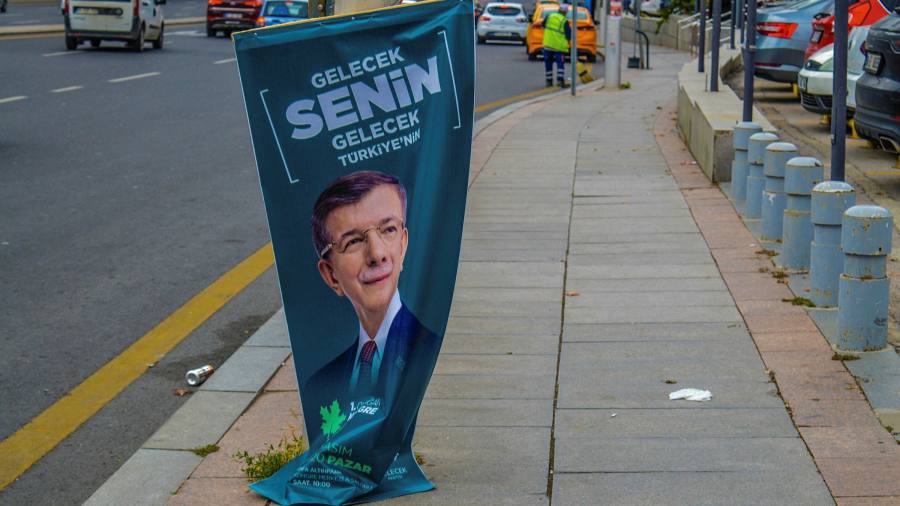 Selcuk Ozdag was on his way to Friday prayers when he was greeted at his front door by a group of men wielding wooden sticks and a gun. The former ruling party MP, now a senior official in a newly formed dissident party, was severely beaten, suffering from a broken arm and a head injury that required 17 stitches.

Ozdag suspects the perpetrators of last month’s attack had ties to right-wing coalition partners of President Recep Tayyip Erdogan – the Nationalist Movement Party (MHP) – with whom he had argued verbally in the days before aggression.

The MHP rejected this claim. But Ozdag, 62, said Turkey’s ruling alliance was afraid of his new political group, which targets disillusioned Erdogan supporters. “The government of today is desperate,” he told the Financial Times. “These people are afraid of democracy, of transparency, of being held accountable.”

The violence against Ozdag is a visceral example of the challenges facing Turkey’s two new opposition groups a year after their formation after a chasm opened within the ruling Justice and Development Party (AKP) from Erdogan.

Ozdag is the deputy leader of the right-wing conservative Gelecek (Future) party founded in December 2019 by former Prime Minister of President Ahmet Davutoglu as the AKP suffered an unprecedented split in its ranks.

A second separatist movement, the Deva (Remedy) Party, was set up by Erdogan’s former economics guru Ali Babacan in March last year in an effort to win a broad coalition of voters left and right.

When the two parties launched, analysts argued that they had the potential to pose a threat to the Turkish president, who has ruled for nearly two decades but whose AKP has suffered erosion of support since his electoral peak. from 2011.

A year later, neither has reached the level of popularity feared by some ruling party officials, with both parties voting an average of 2-3 percent.

“What they do, they do against all odds,” said Selim Sazak, visiting scholar at Bilkent University in Ankara. “It’s really hard to campaign and reach voters when people are ambushing you and beating you up.”

The two young parties – who will both qualify in the coming months to take part in the elections – no doubt annoyed the Turkish president, who has sought a plethora of means to thwart his former allies.

Officials from Davutoglu’s Gelecek party say potential recruits, many of whom come from AKP ranks, have been threatened with losing government jobs or business contracts if they leave the ship. Last year, a university created by the former prime minister was closed by presidential decree.

Mehmet Emin Ekmen, vice chairman of the Deva de Babacan party, said there had been a power outage about the group in the pro-government media and among ruling party politicians. “They speak as if there is no party called Deva and no one called Ali Babacan,” he said.

The coronavirus pandemic and the restrictions that accompany it have presented an unexpected hurdle for parties wishing to use a campaign on the ground to bypass the media embargo. Another problem is funding. “We all pay our own expenses,” said Kani Torun, general secretary of the Gelecek party.

Analysts are divided on the prospects for the parties. Sazak believes Davutoglu – who has surprised some observers with his aggressive verbal attacks on Erdogan – poses the greatest threat to his former ally. “Despite the buzz around Babacan, his party seems to have collapsed,” Sazak said. “It’s Davutoglu who is making progress. Will he get 10 to 15%? Probably not. But he could get a solid 5 percent, ”he says. “It could make him a kingmaker.

Ozer Sencar, director of the polling agency Metropoll, takes the opposite view. Turkey’s economic woes make Babacan – who ruled the Turkish economy during a period of strong growth and increasing prosperity – a more plausible electoral threat, he said, saying he had the potential to win a wide range of voices.

But Sencar believes the cautious, gentle-mannered former minister needs to embrace the public’s desire for a strong leader and reflect more on his own mistakes during his many years in the AKP. “He has to do a self-criticism in front of the public, to confess his sins,” Sencar said.

Officials on both sides say current polls do not reflect their full potential. Ekmen estimates that around 50 percent of the country is still “unaware” of the existence of the Deva party. Raising that figure “will take time,” he said.

Even a small number of defections among AKP voters in the next election, slated for 2023, could create a headache for Erdogan, who must get at least 50% of the vote. He won a contest in 2018 with 52.6% and polls suggest there is a growing segment of hesitant AKP voters.

This is why the two young parties play an important role in the opposition at large, according to Seren Selvin Korkmaz, executive director of the IstanPol think tank. “It is not easy for a Conservative voter to vote for the [secularist, left-leaning] CHP but they can vote for Babacan or Davutoglu because they are the children of their own neighborhood, ”she said. She added that their emergence encouraged other Erdogan critics to speak out.

Ozdag, who is still recovering from the assault, said he and his party would not be put off by the challenges they face. “There is an expression in Turkish: no matter how high the mountain is, the path will lead to the top,” he said. “Despite all obstacles, all attacks, we will continue.”

The level of public satisfaction with Joko Widodo is still high