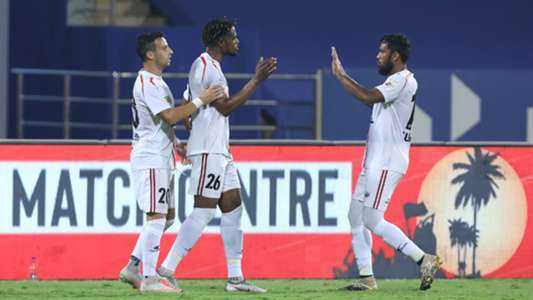 NorthEast United missed a chance to register a win and send a declaration of intent in the race for the top four after a fierce encounter with Chennaiyin FC on Thursday.

The match, which Chennaiyin came close to winning, ended in a 3-3 draw with Luis Machado scoring an added time penalty to save the Highlanders’ blushes, but in hindsight that could prove to be a crucial point. in the team campaign.

It was an energetic start to the game and even though Chennaiyin was already out of the playoff race, they really fought and played for their pride. Lallianzuala Chhangte, who finished the game with a brace, was their star on the evening and his finish and his runs were top notch and reportedly left head coach Csaba Laszlo wondering how Chennaiyin had missed opportunities throughout. the season.

NorthEast United, with their eyes riveted on a playoff spot with more than two teams waiting to pounce on an error, had no intention of sitting down and absorbing the pressure after Chhangte opened the scoring . Their response was typical of the fight they fought under Khalid Jamil and they reversed the tie in no time. First, Imran Khan found the net at close range on a Luis Machado cross to tie the game.

Khalid Jamil missed Federico Gallego and his creative spark in the final third due to a problem, but the midfielder remained orderly due to the pace of work of Khassa Camara who has always been the first to react to stray balls and to launch attacks when such opportunities were present.

Such an attack after a period of pressure from Chennaiyin resulted in Khassa Camara finding Deshorn Brown with a long ball over the defense. The movement reached end to end in no time and Brown, who easily swept Enes Sipovic with his upper-body strength, beat the keeper with a fierce strike to give the Highlanders a 2-1 lead. at the break.

But as we’ve always seen, Chennaiyin is a team that always poses an attack threat. It was then the Machan’s stage for a successful comeback. Right-back Ashutosh Mehta had a scorching and forgettable outing down the flanks against Chhangte’s pace and skill and brought the winger down to concede a penalty minutes into the second half. He was also guilty of leaving Chhante free inside the box to score the first goal.

Following Lanzarote’s conversion on the spot, Chhangte scored himself on the scoresheet for his second goal of the night, beating the keeper with a deflected strike after collecting Edwin’s pass in midfield.

One point is always better than having nothing at a show after a full time. Vishal Kaith, who had a brilliant game under the bar, fouled Idrissa Sylla and conceded a penalty which Machado stepped up and converted. A point also meant that there were three teams out of 27 points, meaning that if they all have the same tally at the end of the league phase, Hyderabad and FC Goa will advance to the round of 16 due to their superiority. in the mini-group to be considered. A draw is a draw, but the Highlanders can have things complicated for themselves.

For Chennaiyin, it was yet another disappointing night as Csaba Laszlo’s side once again conceded points late and lost points. It was the club’s 10th draw this season out of 19 games it has played so far.

Chennaiyin’s biggest problem this season has been scoring as they had only scored 13 goals before the draw against NorthEast United. However, scoring was not a problem for them against the Highlanders, but bad mistakes at the back allowed the Highlanders to score a point.

It’s one of those seasons where nothing is going well for a team despite all their hard work on the pitch. Until Thursday’s game, it was the Chennaiyin attack that let them down. But the day the attack was launched, the defense gave up.