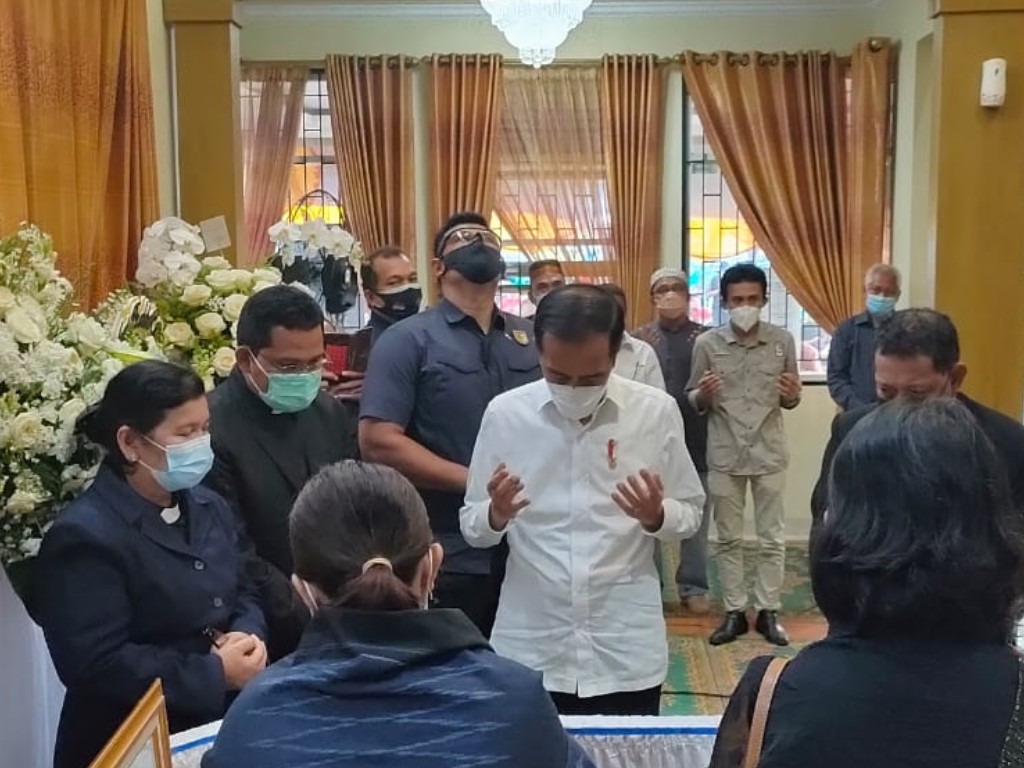 Jakarta – President Jokowi visited the funeral home of the founder and CEO of the information portal Tagar.id, Viktor S. Sirait, Friday February 19, 2021. Jokowi is sorry for the death of the hardworking character who helped escort him to the palace.

The President arrived at Cibinong Funeral Home, Bogor Regency, West Java at approximately 5:40 p.m. WIB. He was greeted by the family who were waiting in front of the house.

A moment later, after removing the shoes he was wearing, Jokowi entered the room where the body of President Jokowi’s volunteer general of the line (Bara JP) lay. In front of the body, the president said a prayer for the late Viktor S Sirait.

After praying, President Jokowi also spoke briefly with his family. He expressed his condolences and deep sadness for the death of Viktor S Sirait.

Family representative Viktor S Sirait thanked and appreciated the presence of the number one person in Indonesia at the funeral home.

“He expressed his sincere condolences for the death of the deceased. Thank you, Mr. Jokowi, our family is honored, he pays our last respects to our late brother,” said Viktor S Sirait’s first brother, Lontas Sirait.

President Jokowi takes off his shoes as he is about to enter the funeral home. Jokowi arrived at the funeral home at 5:40 p.m. (Photo: (Photo: Tagar / Eno Suratno Wongsodimedjo)

Unknown, founder and CEO of information portals Tagar.id (PT Tagar Hexa Utama) died in the wee hours of Thursday, February 18, 2021. The man who is also an independent commissioner at PT Waskita Karya, has died at the age of 47.

Thank you Mr. Jokowi, our family is honored, he paid his last respects to our late brother. President Jokowi was sentenced and expressed his condolences to the family of the late Viktor S Sirait, founder and CEO of Tagar.Id, as well as to the president of Bara JP. (Photo: Tagar / Eno Dimedjo)

The former mechanical engineer from the Bandung Institute of Technology, who was once chairman and commissioner of PT Mitra Taruli Perkasa (electrical mechanics) has died of a heart attack.

Viktor Sirait’s departure, Fetra said, is a big loss for the big family of media portals Tagar. He asked the whole community to send their best prayers to the late General President of Bara JP for the period 2019-2024.

“We also hope that our friends pray that Mr. Viktor and his family will be strong in the face of this ordeal,” said Fetra.

Viktor Sirait was born in Porsea, Toba Samosir, North Sumatra, on October 17, 1974. The name of this Batak-born businessman became known to the public when he participated in the birth of Bara JP, the organization who encouraged and supported Joko Widodo to advance in the contest for the 2014 presidential election.

During his trip, Bara JP succeeded in bringing Jokowi to the seat of the President of the Republic of Indonesia, for two terms. Meanwhile, around the same time, Viktor Sirait was also acclaimed president of JP Bara through the National Congress held in Bogor on Friday August 2, 2019.

Before joining the political world, Viktor Sirait was already known as a businessman. He was noted for having led several companies in various fields, notably as project manager of PT Pharma Kasih Sentosa in 2008-2010, president and commissioner of PT Mitra Taruli Perkasa (electrical mechanics) in 2012-2015 and commissioner of PT Hexindo Multi Utama (construction, mechanics, electricity.) (2011 – present).