LONDON / BEIJING – In the not-so-distant past, China could count on the UK as a reliable and friendly country that partners with international initiatives and welcomes Chinese investment in sensitive sectors.

Those ties have since been severed as Britain stepped up its criticism of Beijing’s national security law covering Hong Kong and its treatment of the Uyghur minority – issues China sees as national issues.

Nearly 5,000 Hong Kong people have applied to become full British citizens within two weeks of opening a new lane on January 31, The Times of London reported Thursday. The program is available to holders of or eligible for British National Overseas status.

After Beijing imposed its National Security Act on Hong Kong in June last year, the UK government decided to issue special five-year visas and the path to full UK citizenship for BNO passport holders and their dependents. Passports are issued to people born before the transfer of territories to China.

Up to 320,000 Hong Kong people are estimated to seek refuge in the UK over five years. China’s Foreign Ministry responded by deciding not to recognize BNO passports as valid travel documents.

Just a few years ago, relations between the UK and China were in a golden age. In 2015, the UK became the first Group of Seven country to join the Asian Infrastructure Investment Bank, led by Beijing, for example.

Chinese companies at the time were invited to invest in British nuclear power plants, with the Chinese group Jingye taking over British Steel. These agreements intersected the basic industries of the two countries.

British skepticism towards China has started to set in due to qualms over China’s initial response to the coronavirus outbreak. Relations officially deteriorated with the imposition of Hong Kong’s security laws.

Things got worse on February 4 when the UK’s Office of Communications revoked the broadcast license of CGTN, the overseas arm of state-run China Central Television. The regulator has determined that the Chinese Communist Party has the final say on editorial decisions, which violates the ban on political entities controlling licensees.

The Daily Telegraph, a London newspaper, reported that three suspected Chinese intelligence officers had been deported from the UK over the past year, each posing as a reporter working for three separate Chinese media companies. 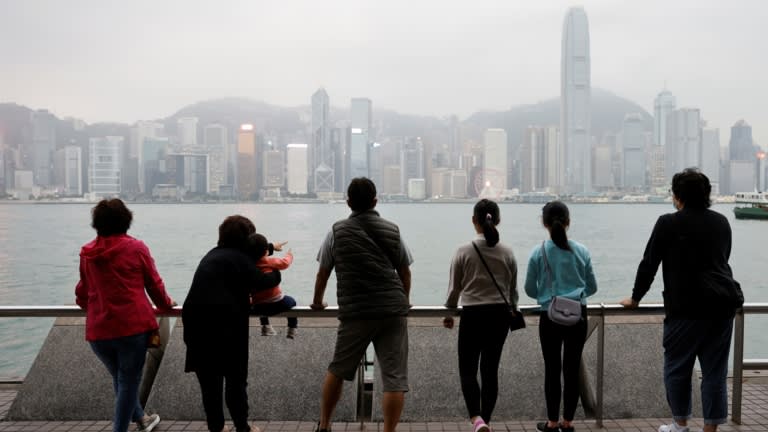 Nearly 5,000 Hong Kong people have applied for new visas that pave the way for British citizenship for people fleeing Chinese repression in the former colony. © Reuters

The British Navy will send the aircraft carrier HMS Queen Elizabeth to the Indo-Pacific region starting this spring, where the ship will participate in joint exercises with the Japan Maritime Self-Defense Force.

This decision responds to China’s naval expansionism. The closer collaboration will act as a counterweight to attempts to change the status quo regarding the East China and South China Seas.

London’s hardening of stance towards Beijing is largely attributed to the growing influence of Chinese skeptics within the ruling Conservative Party. The conservative ranks have traditionally advocated for human rights, and they are unable to ignore the violation of Hong Kong’s self-government and reports of forced labor against Uyghurs.

House of Commons ministers have removed the attachment, but the Upper House should attach it when it receives the revised bill and then send the bill back to the House of Commons. If this law is passed and passed, China will face a major hurdle in joining the Trans-Pacific Partnership trade deal once the UK becomes a member.

On the other hand, not all British Conservative lawmakers have turned into Chinese hawks. While the situation with Hong Kong and the Uyghurs cannot be ignored, there is a need for the two countries to constructively partner on climate change and the global pandemic, a source close to Downing Street thinking has said.

Prime Minister Boris Johnson is known to be friendly with China.

“I wish you and everyone celebrating across the world a happy and prosperous Lunar New Year,” Johnson said in a video message last Friday, before greeting in Cantonese.

The People’s Daily, a newspaper controlled by the Communist Party of China, published a front-page article on February 5 detailing the virtual message Premier Li Keqiang delivered to British business leaders. He hailed Britain’s leaders as “icebreakers” and said Beijing “attaches importance, as always” to its relations with London.

China’s relations with the United States under former President Donald Trump have reportedly deteriorated to the worst since the two countries established diplomatic ties. With President Joe Biden’s political direction yet to be revealed, Chinese leaders are seeking to get as close to the UK as possible.

Having Johnson’s Lunar New Year message aired on China Central Television broadcasts, Beijing does not want public sentiment against the UK to worsen.