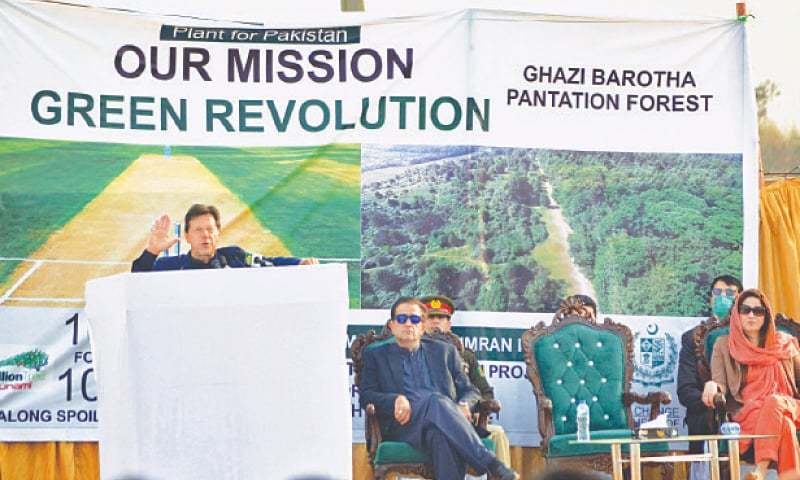 TAXILA: Prime Minister Imran Khan has said that opposition parties, after failing on various fronts, are now trying to buy off ruling Pakistani lawmakers Tehreek-i-Insaf (PTI) to ensure that more of their candidates are elected to the upper house of parliament in the upcoming senatorial elections.

For the past 30 years, a market has been operating for senatorial elections, the prime minister said when addressing a function after a tree plantation was inaugurated as part of the 10 billion tsunami initiative of trees with the Ghazi Barotha water channel in Hazro, Attock town on Friday.

Mr Khan said the politicians’ purchase prices were set before the Senate elections.

Referring to the rallies organized in recent months by the Pakistani Democratic Movement (PDM) oppositions against his government, the prime minister said they had failed. Now they want to get more Senate seats by buying our members. What kind of democracy is it? he remarked.

He also criticized the parties for opposing the recently enacted ordinance to organize the senatorial elections by open ballot. He said even those who had supported the open voting process for Senate polls in the past had started to oppose the idea.

The Prime Minister recalled that the Pakistan People’s Party (PPP), although it has only six members in Khyber Pakhtunkhwa’s Assembly, won two seats in the Senate in 2018.

He said the opposition had had to change tactics after suffering multiple setbacks, including the Lahore rally and attempts to blackmail the government over the Financial Action Task Force legislation.

He said corruption had been normalized in the country under previous governments. A country has been damaged more by the involvement of prime ministers and ministers in corrupt practices than by corrupt revenue or police officials, he said, explaining that when prime ministers steal money. public money, their children have palaces abroad and (corrupt) ministers hold Iqamas (residence permit) from other countries, the country is sinking into a debt trap.

The prime minister said that when a country is burdened with debt, it must seek foreign aid compromising its respect and dignity. Those (rulers) who have hurt the country, they and their children, sons-in-law and brothers-in-law lead an aristocratic life abroad. When I see Ishaq Dar and Nawaz Sharif on a Rolls Royce in London, it looks like they weren’t born in Gwalmandi, but in London, Mr Khan noted.

He said that with the masses and corrupt politicians standing on opposite sides, the nation was going through a watershed moment and Pakistan would emerge victorious. He said the Pakistani people were facing dacoits and mafias and the nation was at a critical crossroads.

Commenting on the planting campaign, Mr Khan said: We want to plant 10 billion trees to make sure we can reverse the effects of climate change.

The billion-tree project must succeed in mitigating the effects of climate change, he said, stressing that no attention had been paid to forestry in Pakistan in recent decades.

The prime minister regretted that instead of improving forest cover over the past 70 years, even the existing forests in Chhanga Manga, Kundian and Chichawatni have disappeared due to massive deforestation. He said Lahore was facing huge smog due to the 70% reduction in green coverage, which was very dangerous for children and the elderly. The threat would increase unless the nation collectively decides to reverse the misdeeds of the past, he added.

Mr Khan said planting trees was essential to protect future generations, especially when Pakistan was among the 10 countries most vulnerable to the impacts of climate change.

He compared the development of 10 cricket grounds along the water channel in the region with the involvement of young people in plant protection. The plantation, he added, was essential for the future of the country and the cricket grounds for the health of the younger generation. He said planting trees was the only solution to overcome the increasing heat due to greenhouse gas emissions.

Responding to some of the demands raised by the Prime Minister’s Special Assistant on Climate Change Malik Amin Aslam for the region, Khan announced the establishment of a special technology zone in Kamra near Attock.

The prime minister said his government’s policy was to prioritize local people for jobs in projects established in a region. He was referring to the demand for job quotas in the prescription industries.

Recalling that before assuming the post of Prime Minister, he had dreamed of extending the establishment of health insurance to all households in the country, he said that not only the district of Attock, but the whole province of Punjab would be covered by health insurance under the Insaf health card scheme by the end. of 2021. Calling it a matter of pride, he said that even developed countries could not yet achieve universal health coverage as provided to Khyber Pakhtunkhwa.

The Prime Minister earlier unveiled the plantation project plaque, under which around 1.143 million trees, including native species such as Shisham, Bakain, Phulai, Siris and fruit plants including guava, medlar, citrus and fig would be planted along the water channel of Ghazi Barotha Power Project.

The project would be completed within three years at a total cost of 147.1 million rupees.

Earlier, the Prime Minister’s Special Assistant on Climate Change Malik Amin Aslam told the rally that the 10 Billion Trees Tsunami Initiative was recognized around the world. He said the KP government not only achieved the target of one billion trees, but also saved Rs 8 billion from the cost of the project.

While accepting the Bonn challenge, the government planted more than 6.5 hectares beyond the 3.5 hectare target, he said, saying the government was on the verge of obtain a third-party audit of the 10 billion trees initiative.

SAPM also thanked the Prime Minister for approving various development projects for Attock, including an Allama Iqbal Open University campus, a mother and child hospital and gas supply to 35 villages.