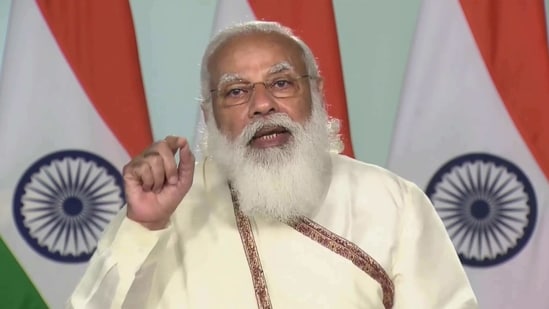 Prime Minister Narendra Modi addressed the sixth meeting of the NITI Aayog board on Saturday via video conference. The Prime Minister emphasized the ease of life for Indians and the ease of doing business to attract foreign direct investment (FDI), among others.

Here are the highlights of his speech:

During his address, the Prime Minister said that federalism is the foundation of India’s development. The Center and the States must work together to give more meaning to federalism. We must also try to establish competitive and cooperative federalism not only between states, but also between districts, he added.

The Center launched the Production Incentive Program (PLI) to encourage manufacturing. States should take advantage of the reduced corporate tax rate. Capital spending for the infrastructure sector will move the nation forward as it will create greater employment opportunities. The Center and the states must synchronize their budgets to better achieve the goals, said Prime Minister Modi.

Aatmanirbhar Bharat is a mission not only for self-sufficiency but also to produce for the world. India is a young nation and to realize its aspiration we have to encourage innovation, develop greater technology, provide better education. Startups and MSMEs need to be strengthened, Prime Minister Modi said while recognizing the individual talents of different states and districts. Healthy competition for exports of different products between States must be developed. This competition should also be instilled in districts and blocks, Prime Minister Modi said.

United front against the Covid-19 pandemic

When the Covid-19 pandemic hit the country, states and the center worked together. This board meeting becomes more important as India nears the end of 75 years of independence, Prime Minister Modi said.

The agendas were set to get advice from all states, give states time to prepare and come up with resolutions. The items on the Governing Council’s agenda are very specific this time around, Prime Minister Modi said.

The nation needs to develop, it doesn’t want to waste time. The private sector is showing up with enthusiasm to help the nation’s development. We must give the private sector space in Aatmanirbhar Bharat’s vision, Prime Minister Modi said.

For Internet connectivity, the Bharat Net program does an important job of providing Internet access to everyone. In all these projects, when the center and the states work together, the country will develop further, the prime minister said.

Since 2014, 2.40 crore lakh houses have been built across the country in all states and cities. More development work is underway to build more modern houses, ensure clean drinking water that does not cause malnutrition in the form of the Jal Jeevan mission. More than 3.5 crore of rural houses were connected to a water pipeline as part of the mission, he said.

The ease of doing business

To empower the country’s poor, we have opened bank accounts, increased vaccinations, increased health facilities, provided free electricity and gas, all of which have brought significant changes to the lives of the poor, Premier said. Minister Modi. The work of providing housing for the poor is also proceeding at a good pace, some states must step up their pace, he added.

Young people should have a space to reflect their talent. PSO regulations were reformed some time ago, which allowed young people to work remotely, which mainly benefited the tech sector. We must end all these restrictions. We have also liberalized geospatial data. It’s the talent of our people, but the products are not ours, Prime Minister Modi said, citing people working for and developing global tech giants like Google.

PM Modi said that we export raw fish products, we can also export processed fish products. Our coastal states must take a common initiative to take control of the world market for which reforms are very important. The reforms consisted of reducing government intervention and regulation aimed at reducing compliance to make life easier.

Panchayat Raj should be made more responsible for the development of the district and come together with the States and the Center to achieve better results. Even though we are an agrarian economy, various other edible products are still imported by the country. Our farmers can grow it all at home and export it too. For this, it is important that all states carry out regional agro-climatic planning to help farmers. A holistic approach has been taken in agriculture, poultry and animal husbandry which has yielded better results, Prime Minister Modi said.

The Prime Minister will meet the representative committee of 3 members of the missing persons: Mazari – Pakistan

Mens Tennis drops to No. 6 Illinois in season opener