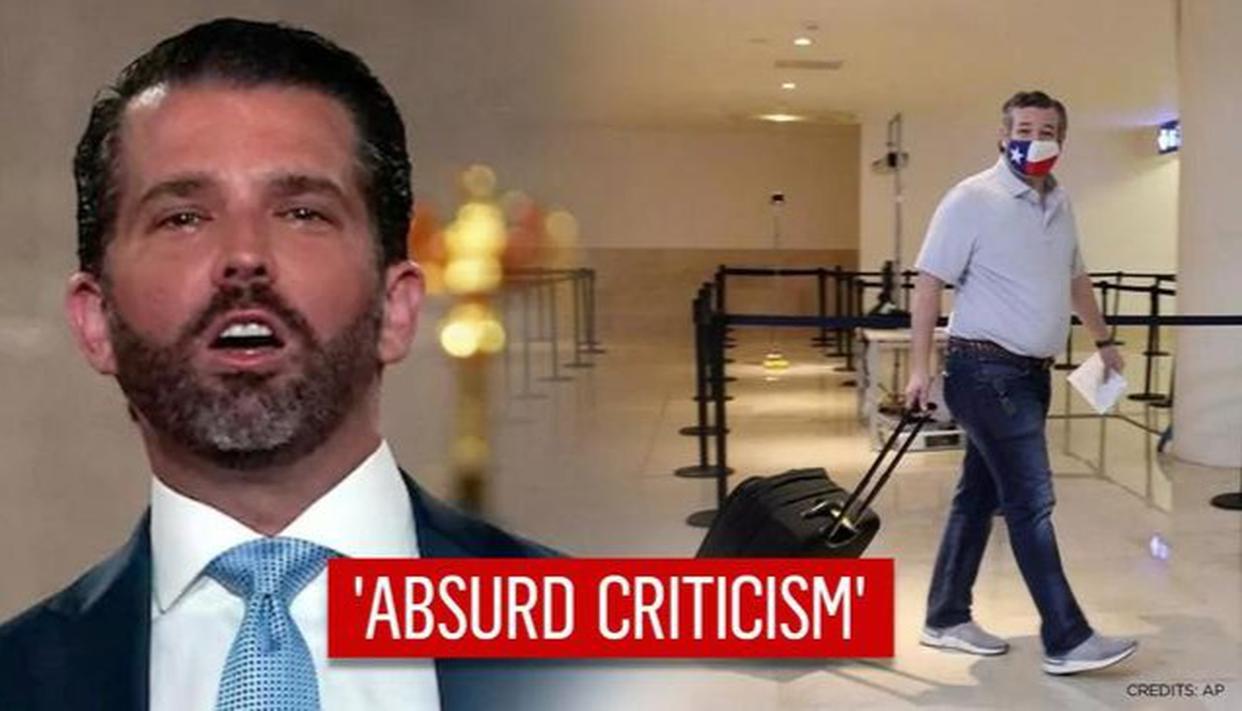 Donald Trump Jr. defended Texas Senator Ted Cruz on Thursday after the latter suffered severe backlash during his trip to Cancun amid a harsh winter storm and power outage in the state.

Former US President Donald Trump’s eldest son posted a video calling Cruz’s criticism ‘ridiculous’ and said Texans should instead blame someone with legal authority in crisis situations , like the governor.

“I can’t get on this bandwagon trying to undo the guy. It’s totally ridiculous. It is absolutely absurd. In the grand scheme of things, Ted Cruz is a senator. It does not manage crises in states. It is the job of a governor. He’s a federal employee, they mostly vote for things, ”said Trump Jr.

In a tweet, Trump Jr. protested against the “hypocrisy” of wanting to criticize Cruz while ignoring the “incompetence” of the “democratic” governors. However, this tweet was poorly received for a reason the governor of Texas is a Republican and not a Democrat. Gov. Greg Abbott was a supporter of Donald Trump, who even backed the former president’s allegations of fraud in last year’s presidential election.

The hypocrisy of those who try to annul Ted Cruz who have been totally silent on the incompetence of their Democratic governor is revealing. My thoughts on the Cancún Cruz outrage! #Cruz #CancunGate is wrong. https://t.co/WnYe1onpIK

Many Twitter users reported the error to Trump Jr. and criticized him online.

Cruz returned home from Cancun on Friday amid mounting criticism and called for his resignation after taking a trip as millions of Texans suffered from the state’s historic winter storm. Upon his return, the senator admitted that the trip to Mexico was a “mistake”.

In a statement, Cruz explained that his daughters had insisted on going on a trip and that he only accompanied them to “be a good father”, but did not intend to stay.

The trip drew criticism from leaders of both parties and was seen as potentially damaging to his future political ambitions.

A winter storm bringing down snow and ice, which also sent temperatures plunging, hit Texas. The deadly storm destroyed power supplies, and people are battling the low temperatures without heat or electricity. Houston officials had warned people to be prepared for blackouts and dangerous roads. Earlier this week, nearly 120 crashes, including a 10-car stack on I-45, were reported.

On Sunday night, US President Joe Biden declared an emergency in Texas and ordered federal aid to aid states and local response efforts. The declaration enables the Department of Homeland Security and the Federal Emergency Management Agency to provide assistance, equipment and resources to those affected.

READ | Texas: the power returned at most temperatures after the winter storm that plunged