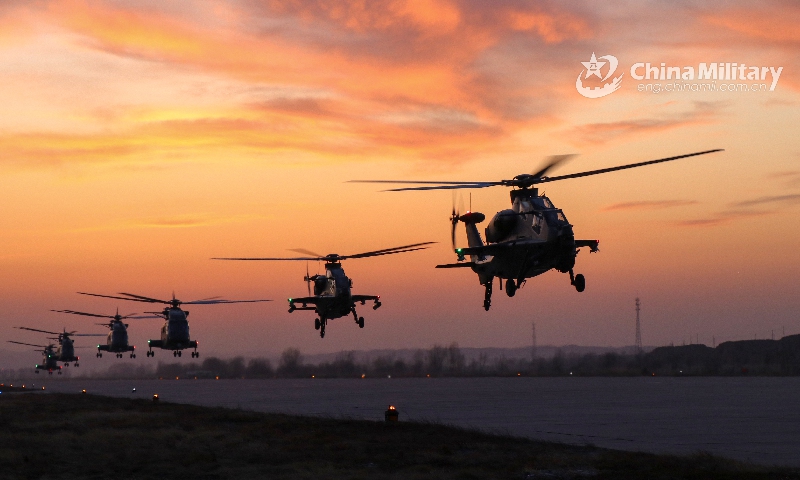 A group of attack and transport helicopters attached to an Army Aviation Brigade under the 76th PLA Group Army conduct hover checks before departing for a 24-hour flight task on February 2, 2021 (fra.chinamil.com.cn/Photo by Yang Mingfu)

The new military training system will aim to ensure that the People’s Liberation Army (PLA) exercises are the same as real wars to deal with rapidly changing global situations and external threats, Chinese military analysts said on Sunday.

The decision underscored efforts to accelerate the establishment of the training system, improve military training in all respects and strengthen the ability to win wars to make the PLA a world-class armed force, said Xinhua.

He also highlighted the promotion of combat-oriented training, the exploration of new training paradigms and the improvement of the management of training operations as well as support conditions, Xinhua reported.

A more detailed report, published on Saturday by the PLA Daily, explained that the decision called on the Chinese military to train as if the exercises were real wars, to boost joint exercises, to improve training with the technology, strengthen talent support and follow the patterns and laws of training and winning wars.

Intensive training not only of soldiers but also of commanders and the creation of realistic environments on the battlefield is a priority, according to the PLA Daily report.

Song Zhongping, a Chinese military expert and television commentator, told the Global Times on Sunday that compared to previous training systems applied by the PLA, the new system places more emphasis on the coupling between training and actual combat, inasmuch as the two need to be very identical.

The new system also requires new methods, including the deployment of training equipment and the means to support it, to make the exercises more like real wars, Song said.

Unlike the US military, which has operated around the world and has been in battles constantly, meaning it maintains its sharpness, China hasn’t fought a real war in decades, so training is one of the few ways to hone combat skills, and that’s why high-quality training is so important to the Chinese military, another Chinese military expert told the Global Times on Sunday on condition of anonymity.

The new military training system aims to eliminate bad practices that have accumulated during a protracted peace to make the military more ready to engage in wars, even if China never wants them, the expert said. anonymous.

China faces rapidly changing global situations, especially ever-increasing threats around China, including those from the powerful United States, Song said, noting that these have forced the PLA to strengthen its ability to wage real wars.

The United States has sent warships to the South China Sea and the Taiwan Strait, and fighter jets near China’s coastal areas for close reconnaissance, all moves according to analysts aimed at containing the China.

The main aim of China is to complete the modernization of national defense and the armed forces by 2035, and fully transform the people’s armed forces into a world-class army by the middle of the 21st century, Xi said. during the opening session of the 19th Chinese Communist Party. Congress in October 2017, Xinhua reported at the time.

The new training system is also part of efforts to achieve this goal, analysts said.