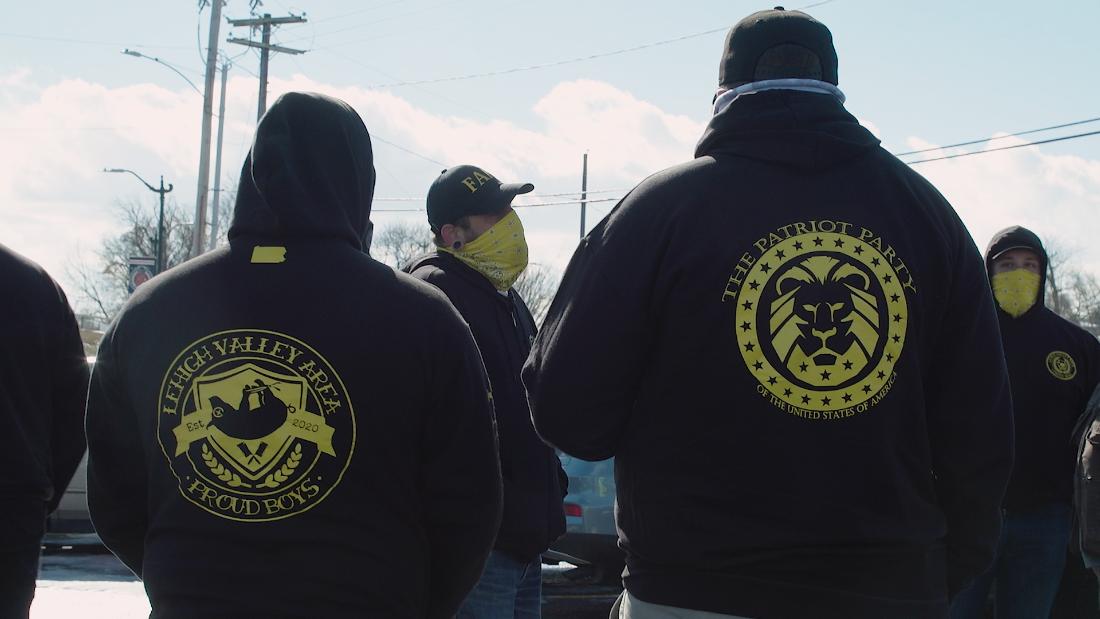 The idea and, perhaps equally important, the logo, have been circulating on social media since last summer. But after the Capitol riot and President Joe Biden’s swearing-in, Patriot Party groups have formed and mushroomed, mostly on Telegram, where they share memes, misinformation, and commentary in chaotic channels. in all 50 states.

On February 6, a Patriot Party group held their first public rally in Harrisburg, Pa., Which was billed as an “awareness march.” Only about thirty people showed up, not much happened and it was over in a few hours. But at its conclusion, when CNN returned to the parking lot, some attendees had changed their clothes. At least eight wore Proud Boys hoodies. They were shouting that their cars had been vandalized. They didn’t want to explain the wardrobe change and were angry with the question.

The energy and anger that fueled the Trump movement and the January 6 riot on Capitol Hill are still around, swirling, and it’s unclear who will grab them and for what purposes. At the moment, it looks like the Patriot Party is emerging as one of the vessels of this energy. But even those who are there do not know who their comrades are.

The “awareness walk” was organized by a man named Richard “Dick” Schwetz. Schwetz, who goes through Dick Sweats online often and has said his name has been a challenge for most of his life, publicly on video said he was a proud boy. But as he waited in the parking lot for a bus full of women who supposedly came from Pittsburgh and never showed up, Schwetz denied that this event had anything to do with this group.

CNN then highlighted the stack of merchandise visible on the back of Schwetz’s car, which included hats with the Patriot Party logo in the Proud Boys’ black and gold colors. Was it meant to look like the Proud Boys? Schwetz said, “No, I didn’t, I – I just had yellow vinyl. I’m sorry. That’s all I had left.”

Schwetz told CNN that one of the reasons for the rally was to “set up official representatives of the Patriot Party.”

“The only way we could figure out doing this, since we’re all exhausted from all social media, is to meet in person and do it the old fashioned way. I had the pen and the paper and everything, ”Schwetz said. It’s hard to tell who’s really online, he admitted. “It’s a digital world. It’s unfortunate.”

In the last days of his presidency, Donald Trump pitched the idea of ​​creating a new party, CNN reported. The Wall Street Journal reported that he wanted to call it the Patriot Party. Trump’s campaign adviser Jason Miller then told CNN that Trump is currently not considering launching a third party, but some of his supporters are trying to do it themselves. The Trump campaign had to file a notice with the Federal Election Commission stating that it had “no affiliation” with a patriotic party that had claimed in its own file to work with the Trump campaign.

There are several national Patriot Party Telegram channels and groups in every state. There are no clear leaders. Many subscribers say they’ve been kicked from Facebook and Twitter, so they mostly organize on Telegram – where anyone can join under any name.

There, people share the same misinformation about elections, QAnon, Covid-19, and the riot itself that is often banned on other social media.

CNN spoke to several people from those channels who were on Capitol Hill on January 6.

One person who was on Capitol Hill and also in Harrisburg was Andy Walker, a regular at “Stop the Steal” events in Pennsylvania after the election. “We want our freedoms back. We want the constitutional path,” Walker said. “The laws that … this nation was founded on … And there’s the censorship, the ban. It’s all getting out of hand.”

Walker said he wanted to elect Patriote Party guys to the local government. Like others at the rally, he said he believed the election was stolen. It was not.

Walker said he visited the Capitol on January 6, but denied entering the building. “I would do it again,” he said. “What do they expect of us when we have been repressed, closed off and silenced?”

Patriot Party supporters hung out for a bit on the steps of the State Capitol in Harrisburg. Two women came to educate the public about a trial they said would overturn the election results. Some planned to meet at a restaurant later. A woman asked the CNN crew if reporters liked the American flag.

Then the rally participants returned to their cars shouting, “Bye, CNN!” We spent a few minutes talking to people and then headed back to the parking lot, where we found a strange scene. The supporters of the Patriot Party were distraught. And some wore different clothes.

At least eight wore Lehigh Valley Proud Boys hoodies, some with yellow bandanas. One wore a surprisingly similar black and gold Patriot Party hoodie. They were screaming. They said “national terrorists” had vandalized their cars – nails behind the tires, two stolen flags, spray paint on the windshields and windows of two vehicles, and a flat tire.

“These are the aftermath of domestic terrorism against the conservatives in this country, which has lasted forever!” Schwetz said.

In a video later posted to Telegram, Schwetz said, “We have our boys here.”

No one would answer the question of why the Proud Boys changed their hoodies or why they came in the first place. A woman shouted, “Leave the Proud Boys alone!”

(In a video recorded a few minutes later in the same parking lot and then posted on PA Telegram’s Patriot Party channel, Schwetz blamed antifa, saying, “We came back earlier because of the telegram threats made by antifa. .. They came out and attacked us right away assuming that because we are men and we are patriots, we are obviously the enemy. “)

“We weren’t doing anything to anyone,” one woman said. Other men screamed, although it was incomprehensible in our audio recording.

When asked, on several occasions, how he reconciled the fact that he said the event had nothing to do with the Proud Boys and yet they were there, Schwetz replied: “I have you asked to be respectful that this was a Patriot Party Event. You always come back to something has nothing to do with it. ”

Schwetz called the police. A black policeman looked at the Confederate flag sticker on Walker’s truck as he monitored the damage.