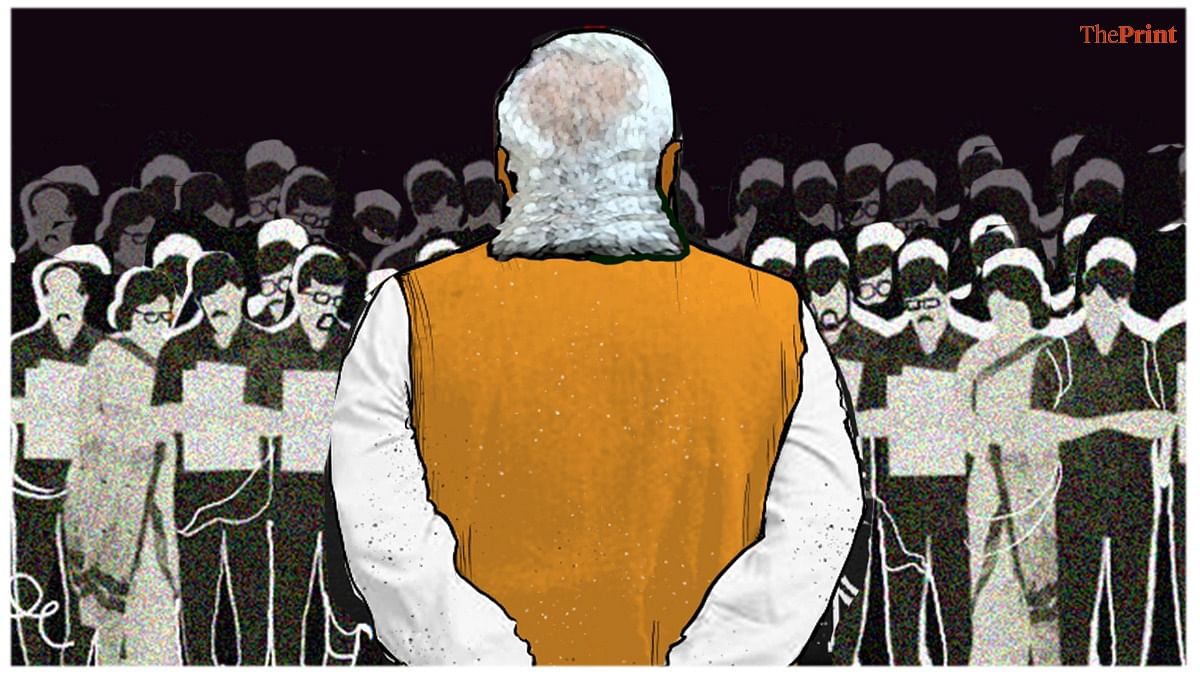 New Delhi: Prime Minister Narendra Modis very publicly stripped the Indian civil service during his acceptance speech at Lok Sabha on February 10 is not the only time he berated civil servants, ThePrint has learned.

Many government sources told ThePrint that on at least three other occasions in the past month, the prime minister has attacked officials.

The last such case occurred on February 24, when PM Modi attended a online seminaron the monetization and divestment of assets organized by the Department of Divestment. The meeting was held to work on suggestions for the monetization of over 100 public sector assets valued at over Rs 2.5 lakh crore.

Modi, speaking at the meeting, said the government was not obligated to continue running public sector companies just because they have been running for decades or because they were someone’s favorite projects. a.

The Prime Minister said that the private sector brings investments, global best practices that modernize and develop a sector as well as employment opportunities. He also hasreiterated that the government has nothing to do before criticizing officials from different departments.

The prime minister said government officials were unable to make courageous decisions for fear of the allegations and the courts, a source said. He warned Babus that it is not only DIPAM’s responsibility (Department of Investments and Public Asset Management)to monetize these assets and that the departments to which these assets belong should also participate.

On the same day, February 24, a second source said First minsist attended a meeting in Pragati, where he reviewed the state of infrastructure projects, where, once again, he clearly expressed his frustration with officials.

According to the second source, Modi was upset by the lack of progress on the 41.5 km railway line between Darjeeling and Rango in east Sikkim, a project sanctioned in 2009-10.

The prime minister asked the Ministry of Railways to fix responsibility for babus and the department that was wasting domestic taxpayer money, the source said. Everyone heard the PM in silence.

About ten days earlier, on February 16, the prime minister reportedly had another explosion directed at officials.

An official present at a meeting Modi had with infrastructure ministries and heads of the private sector, said he stressed that projects were being implemented at a slow pace and warned officials he there should be no loss to the nation because of it.

Just a week before that, on February 10, the Prime Minister made a very public scathing public service observation on Lok Sabha soil.

While praising the private sector for its contribution to the growth and development of the country, Modi questioned the center of power that we have created in the country by ceding everything to babus.

(Babus will do anything. By dint of becoming an IAS officer, they will operate fertilizer warehouses but also chemical warehouses, and even fly airplanes. What is this great power that we have created? What are we going to accomplish? by handing over the reins of the nation to babus. Our babus are also citizens, just like the young people of India.)

For most officers, the PM’s statement was a rare and categorical public denunciation of the entire IAS community by the highest office in the country.

A change of position

The Prime Minister’s statements against the civil service are a long way from the days of Gujarat, when, as chief minister, he relied on IAS agents to do his job.

But several officials and sources ThePrint spoke to said Modis’ change in stance was mainly due to his belief that officials are not taking a proactive approach to government monetization plans.

The first source cited above told ThePrint that the explosion of prime ministers in Parliament was due to Modi feeling the officers had a pessimistic view of the power pack monetization efforts.

He (Modi) wants deliverables at a fast pace, but infrastructure projects take time. There are also many investment and asset monetization issues but he wants quick fixes, said one of the secretaries present at the Feb 24 asset monetization meeting.

Somehow, he has formed a view that divestment targets have not been met in recent years as bureaucrats have taken a less aggressive approach.

Perhaps industry leaders have informed the Prime Minister of bureaucratic attitudes… but the point is, the government’s goals have not been met due to the global recession. There are not enough buyers to match our rating. The sale of all these assets can take 10 years.

An official from NITI Aayog, who is regularly present at several of the meetings chaired by the Prime Minister, said: Previously, the Prime Minister was very open, but now often he does not want to listen to problems. Maybe he knows the problems.

The Aayog official added that until Nripendra Mishra was in charge of the business, the instructions and implementation were clear. Mishra had been the prime minister’s principal secretary until his release in September 2019.

After its release, there is a lack of clarity and quick decision-making, Niti Aayog manager said. Its explosion (Modis) also targets PMO officials who oversee implementation and set policy guidelines.

Another officer told ThePrint that Modi could be weighed down by the current state of the economy.

The priority of prime ministers right now is to boost the economy after the Covid year. For this to happen, spending is required and the PM is confident that without the industry and the people who have expertise in asset monetization, it cannot happen, the officer said.

Bureaucrats cannot monetize 100 public properties, which is why in Budget 2021 there is an ad for a Special Purpose Vehicle (SPV) for monetization and divestment. Many people in the industry will be mobilized to make this government process effective.

The officer added that other members of the Union cabinet were also of the same opinion.

The officer said Infrastructure Minister Nitin Gadkari had, in a online seminar on February 28, expressed frustration with officials because in numerous review meetings with the prime minister, plans from his ministry were being reported.

He said that after six years he saw that in this system people will not change, the officer said. Gadkari said he comes to the conclusion that it is very difficult to change them. He also said that a committee of experts will be appointed to give direction to new technologies in highway construction and that he will bring in good people from the states to give the infra a boost.

A retired official who has been kicked out of the government told ThePrint that Modi may be driven by his desire to sell power supplies.

The Prime Minister has always had a very cordial relationship with the bureaucracy. He promoted so many bureaucrats on loyalty and performance and even rewarded them after retirement, the former officer said.

Some of his officers have worked with him for two decades. So when did they become ineffective? Perhaps the reason for his outbursts is that the Prime Minister is creating a perception that the private sector is a creator of wealth to avoid future criticism of the sale of so many PSUs.

Also read:Why Jammu and Kashmir has so many non-IAS officers running district administration